Nicole Santiago encourages the viewer to look deeper into her paintings, past the initial impression and into the larger possible messages.

Her works on domestic themes show colorful images of children and celebratory cakes, supervising adults and sleeping babies. But the William & Mary associate professor of art and art history has bigger intentions for her narrative works.

“I want to defy the stillness of the painting, to portray a layered narrative where the residues of the past and suggestions of the future swirl around the present, creating a kind of ‘thick time,’” Santiago said.

“What I mean by thick time is that if you, the viewer, choose to peel back the layers of my visual narratives, there’s more than just the immediate moment shown. There’s a before and after.” 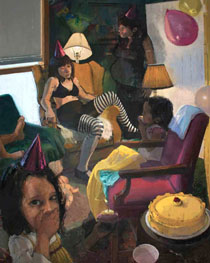 For example, the initial image of a woman with a birthday cake reveals it’s shaped more like a wedding cake. The candle flames are very intense, and they’re overlapping a map hanging behind them.

“Certainly, the ambiguous gaze she directs at the cake could mirror her internal uncertainty concerning marriage,” Santiago said, adding that the protagonist’s unclear actions with a doll she is either taking out or putting into a gift bag might allude to her ambivalent feelings about motherhood.

“It is also not by accident that the flaming candles atop the cake visually align with the map in the background, perhaps suggesting the derailment of her current trajectory and former self. Placed in the foreground at the young woman’s feet is a gift bag, open and ready to reveal its contents. All of these elements are placed as props to coax the viewer to interpret the narrative according to his or her own life history and experiences.”

Solo shows in New York at First Street Gallery, where she is a co-op member, and Shoestring Studios the first half of this year will showcase her paintings. They are her first solo exhibitions in New York since 2013.

{{youtube:medium:right|k3Ndi5Yhr8c, In the studio: Painting through life}}

A life of their own

Santiago was painting children before she had them because she wanted them, although she said she isn’t sure she was completely aware of that at the time.

"I mean I knew I wanted children, but mostly thought I was making them as an allegory to the painting process,” Santiago said. “During that time, children began to appear in my dreams. In the dreams, I would often be designated by an unknown force to rescue a severely neglected child from danger, but I could never get there in time.

“One night I did arrive in time. I picked up the swaddled baby and peered down at the small bundle. The baby was not a baby at all. It was a tube of paint.”

She goes on to describe squeezing the tube and seeing burnt sienna oozing onto the ground, connecting that the neglected children in her dreams were her paintings. Beginning to consider her works as creations or children, she saw how they existed separate from their creator.

“I noticed that the more the painting progressed, the less of my will I could impose upon it,” Santiago said. “With the first few brush strokes I had complete freedom, they could go anywhere. But each successive mark turned the work into collaboration and a compromise between the painting and myself.” 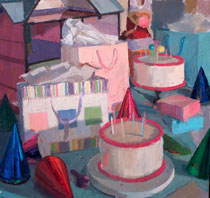 As works matured, they told her how to help them toward completion. When she finished a painting and it left her studio, she felt a sense of loss and wanted to visit it like an old friend, she said.

“In my way of understanding the world, this is not much different from having children, in a way,” she said. “As the child grows, the parent decreasingly asserts his or her will, allowing the child to eventually make all the decisions in his or her life. This is what happens with a painting.”

Now her two little ones have influenced her thinking and work along the continuum. The paintings at Shoestring mostly involve children and cakes.

“In the last decade I have experienced many of life’s common milestones: marriage, birth, etc. and have been thinking about how often food, most commonly cakes, are shared to celebrate these milestones,” Santiago said. “As a result, I began using cakes as a motif in my work, mostly in the guise of a birthday cake, to imply celebration, ritual, indulgence and decadence.”

That included her own marriage and some deaths and births, including the births of her own children. The idea carries over in the works at First Street, which feature the theme of parenthood with its chaos, messiness and exhaustion that she called “a beautiful mess.”

She talked about how there are heavier societal pressures on mothers as compared to fathers, compounded by the expectations women put upon themselves. Working, parenting and housework all compete for time and attention.

“And so there are all these balls up in the air, and you can’t catch them all. When they fall you just have to decide which ones to catch and which ones to let fall. Right?”

She said that another reason she painted children before she had them was that she actually saw that as an allegory for the labor that goes into painting. It’s a difficult task that sometimes includes frustration along with enjoyment. 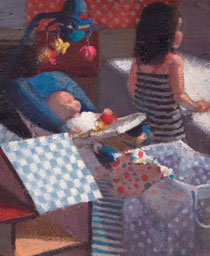 Santiago teaches drawing at W&M, and said she does most of her painting when classes aren’t in session, though she tries to always be producing work. She said she feels really lucky to be walking into her space at Matoaka Studio each day, thankful for her job that’s now in its 11th year, space to work and for her students.

“They’re wonderful to teach,” she said.

Having her studio and office in one space adjacent to classrooms allows her to show them what she’s working on. An unfinished work stood in the middle of the room, showing the view past a cell phone screen and down into a stroller where tiny feet poked out at the bottom.

It came out of her thoughts about being distracted, seeing other parents absorbed in their phones and then catching herself doing it during a stroll with her son.

“But then these worlds are autobiographical, but not all the way,” she said. “There’s some element of fiction to all of them.”