Kathleen Powell, William & Mary's assistant vice president for student affairs and executive director of career development, has recently been named president-elect of the National Association of Colleges and Employers (NACE).

Established in 1956, NACE is the leading source of information on the employment of the college-educated. The organization uses various resources to connect more than 6,300 career services professionals at 2,000 colleges and universities nationwide. NACE provides its members with hiring trends in the job market, tracks starting salaries and identifies best practices and benchmarks. 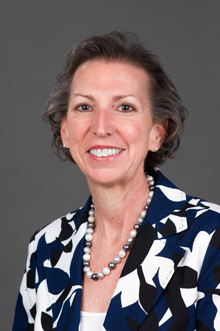 "This is a tremendous leadership position for Kathleen, and it affirms that William & Mary’s career development efforts are being guided by one of the most accomplished, respected and knowledgeable professionals in the field today," said Ginger Ambler, vice president for student affairs at William & Mary.

Powell was nominated for the position of president-elect in fall 2014. Upon completing an application which highlighted her capacity and breadth of depth in the field as well as a personal statement, Powell’s application went on to be reviewed by NACE’s Sourcing and Nominating Committee who created the slate to be reviewed by the executive board. Powell was then notified in December that she would be on the ballot, and the entire NACE membership had to vote on the slate.

The position comes with a three-year commitment. Powell will become president-elect July 1, 2015, and then president in July 2016. From July 2017 through June 2018, she will serve as past-president.

“I was honored by the nomination of my peers to be recognized for my contributions to the field,” said Powell.

When asked what she is looking forward to as president-elect Powell noted that she can’t wait to see the inner workings of a professionally practice organization that has deep impact with so many constituents.

"I’m looking forward to working with an amazing group of professionals, not only on the career services side but also on the employer relations side, as well,” said Powell. “NACE has over 8,000 members from across the globe, and just to do that deep dive into what’s important in the profession, being a part of conversations and working with an amazing board to shape the landscape; how we actually work with the college educated, that’s what drives me professionally and personally."

Powell also noted that she would not have been able to obtain the position without the support of her William & Mary colleagues.

“Being nominated to run for a board position with a national organization is exciting and demanding. The opportunity to follow through with the nomination was possible due to the support of William & Mary, specifically my Vice President Ginger Ambler,” said Powell. “It was important to me that I had her support to move forward in the process and she was all in.

Having extensive experience in career services and being a long-time advocate of young professionals, Powell hopes to assist students and recent graduates while balancing her own professional and family life.

“Professionally I’ve been in the career development vertical for more than twenty years. It is humbling to be recognized for the work that I’ve contributed to the profession and to the association,” said Powell. "On the personal side, I will be managing my role as assistant vice president and executive director of career development at William & Mary in addition to my role as NACE president-elect.

"I have a passion for my work, high energy and a keen sense of work-life balance. This new opportunity will be a true test of my organization, time-management and strategy skills! I look forward to serving NACE. This is a very exciting time in the profession as a practice and the optics for career development in higher education has laser focus. To be an integral part of the larger conversation is an exciting time for me, the profession, higher education and our students.”