The organization will recognize Marchello in February during the opening session of its annual conference in San Antonio, Texas. 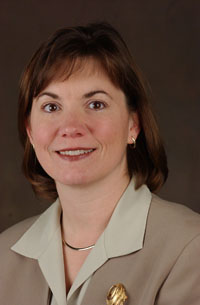 According to its website, the mission of SACRAO is “to provide for the dissemination of information, the exchange of ideas, and leadership in policy interpretation in the region.”

“SACRAO has been a tremendous source of professional development for me because, as a regional organization (14 states), it’s big enough to have subject-area experts from whom I’ve learned about the law and best practices, but small enough that I have developed lasting collegial friendships.” Marchello said.

“I’m at home in SACRAO because of a shared perspective on higher education and on the organizational structure of our work, and on what it means to have fun with one’s colleagues.”

In 1992, Marchello began her long-time affiliation with SACRAO. A year later, at her first SACRAO meeting, she gave a professional presentation. The following year, she led the marketing efforts and was the publicity chair for the annual meeting in Norfolk, Va.

Since then, she has been involved in numerous SACRAO committees and has presented at several of the annual SACRAO conferences.

As the years continued, Marchello’s leadership involvement with SACRAO grew. In 1998, she became a member of the executive committee where she served in several offices until retiring in 2011.

Throughout those years, Marchello was involved in various projects for SACRAO including the SACRAO Journal Archives and the online SACRAO Job Board.

Marchello recognizes that her ability to serve SACRAO has been dependent on institutional support.

“I am very grateful to William & Mary for allowing me the time and flexibility to host SACRAO in Williamsburg in 2008 and then to serve in the three-year presidential cycle," said Marchello. "Prior to my tenure here, both Old Dominion University and Thomas Nelson Community College encouraged my participation in these professional development opportunities, and I appreciate that my supervisors found value in this work.”

But Marchello’s service to the education community does not end with SACRAO. Marchello also serves on the Board of Directors of the Hampton/Newport News Community Services Board and as president of the Hampton High School Parent-Teacher-Student Association. She also holds a City Council appointment to the Citizens Unity Commission’s leadership group, and she has served as an officer in the Virginia College Personnel Association and Virginia Association of Collegiate Registrars and Admissions Officers.

“Sallie has led an exceptional career in higher education, one filled with exemplary service and dedication to the field,” said SACRAO in a biography they provided with the award announcement. “There are few people more deserving of the SACRAO Distinguished Service Award.”