The trial period is over—and William & Mary anthropologist Barbara King is a guest no longer. 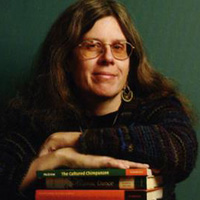 The editors of the blog 13.7: Cosmos and Culture, a web-based feature of National Public Radio, have asked King to become a permanent contributor to the blog. She will join an existing group of regular contributors as the only anthropologist—and the only woman author.

“I was asked to blog for an unspecified time as a mutual trial period,” said King, Chancellor Professor of Anthropology. The title of the blog, 13.7, refers to the age of the universe in billions of years. NPR describes the feature as the “intersection of science and culture.”

King said she didn’t have to think very long before accepting the offer to join 13.7 permanently: “I’m having a great time at NPR,” she said. “It’s all good.”

Her most recent post is an scientist's personal examination of the “paleo-diet,” whose adherents try to eat what they believe our remote hunter-gatherer ancestors ate.

King’s introduced herself to 13.7 readers in a Sept. 15 post titled “Humans and Animals, A Voice from Anthropology.” Since her initial post, her contributions have appeared every Thursday. Her thoughts on the place of humans, our ancestors and other animals within the context of the natural world draw a number of comments and King often provides detailed, thoughtful responses to her readers.

“NPR listeners—and I guess I mean readers, too!—are a very smart and fun audience to engage with,” she said. She’s been offering readers a wide variety of topics each Thursday.

King’s Sept. 29  post titled “Sex, Gender and Dancing With Chaz Bono,” takes aim at the intersection of science and pop culture, as she uses controversy about the transsexual Chaz Bono’s appearance on Dancing With The Stars to discuss the difference between sex and gender. For her Oct. 6 post, the most recent, she points out the contributions of women and children among our distant ancestors.

“Why does a person's sex matter in our studies of the past…?,” she writes. “In part, it's because scientists wish to correct a vision of our past that was for too long dominated by spear-carrying, mammoth-tracking adult males.”

King is the author of the Being With Animals (Doubleday 2010), Evolving God (Doubleday 2007), The Dynamic Dance (Harvard University Press 2004), and a number of other books.

“I’m going to lead with my strengths,” King said when she began contributing to 13.7. “My beat, as far as I’m concerned is animal cognition, animal emotion, human evolution and things that relate to those topics.”

She said one topic she wants to explore centers on how nonhuman primates think and feel. “For instance, chimpanzees are so clever at communication and tool-using, but science is also finding out that they are capable of empathy and feeling deep grief,” King said. “What are chimpanzees really doing? And what does it mean for ourselves?”

King’s Oct. 20 entry, “Do Animals Grieve?” drew a large reader response to her assertion that grief is not restricted to “the usual suspects” such as apes, elephants and whales.

“The outpouring of stories that NPR readers shared on animal grief, both at the13.7 site and on NPR's Facebook page, was fascinating and is even pointing me in new directions for the book I am on research leave to write,” she said.