Environmental change is nothing new in Polynesia. For centuries, the inhabitants of the volcanic, sea-battered islands have been employing a variety of strategies to adapt to their changing landscapes.

A William & Mary archaeologist has been studying 1,000 years of the islanders’ methods of coping with life amid some rapidly changing ecosystems atop geologically unstable islands. Jennifer Kahn says Polynesians of hundreds of years ago had to deal with issues including deforestation, invasive species and loss of arable land.

Kahn, an assistant professor in William & Mary’s Department of Anthropology, explained that some of the islanders’ challenges, such as sea level rise and fall, were beyond their control.

“They had to adapt to isolation and hard conditions often,” she said.

Other issues were self-inflicted, brought on by a number of practices such as destructive agricultural techniques and overharvesting of natural foods. The ancient Polynesians’ environmental problems were remarkably similar to some of the effects of today’s global warming trends. Kahn says the coping strategies of ancient Polynesians have implications in today’s warming world.

“These islands are like the canary in the coal mine for climatic change,” Kahn said. ”These people already are having to deal with increased cyclones, and tsunamis and their crops getting wiped out.”

Kahn is leading a group that is studying the islands of Mo’orea, Maupiti, Rai’atea and Mangareva. All were inhabited roughly 1,000 years ago, but the islands vary greatly in age, geological makeup and isolation. Differences and similarities allow Kahn to compare social and environmental changes in her research.

She calls her investigation of the Polynesian ecosystems the “M3 Project.” Kahn’s work has received substantial support from the National Science Foundation, beginning in 2010. The NSF has funded a new portion of the M3 Project through 2017.

Work on the M3 Project alternates between archaeological field sessions on the islands and processing and interpreting artifacts, largely done in Kahn’s lab on the third floor of Millington Hall on the William & Mary campus. William & Mary students are involved in both the island excavation and the lab work.

Kahn’s lab has several tables, each covered with wide varieties of animal bones, tools and shells collected from the islands. Marissa von Nessi ’16, Lindsey Guthrie ’16 and graduate students Summer Moore and Ally Campo are among the members of the Kahn lab team, working at cleaning, classifying and sorting a wide variety of artifacts. The students work diligently, scrubbing each artifact gently and thoroughly. Archaeology takes time, both in the field and in the lab.

“I’m taking so long to clean today! I’ve been at the same shell for thirty minutes!” one student exclaimed. Kahn notes that every hour in the field requires another eight hours spent in the lab; this ratio is why student involvement is so important in her project. 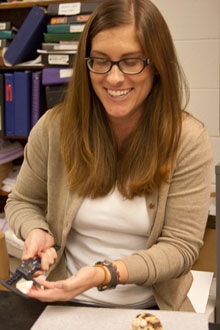 The interpretation of the carefully cleaned and catalogued artifacts will allow Kahn and her team to examine questions such as how the environments on each island affected the development of social systems and the communities’ resiliency to environmental change. Another aspect of the research focuses on how human interaction altered the food webs and landscapes on the islands.

The four islands presented their inhabitants with a range of environmental pluses and minuses. Kahn explains that Mo’orea is a comparatively young, wet island, offering a greater abundance of resources such as rivers and forests. Mo’orea is a valuable benchmark for Kahn, who notes that older, more arid islands such as Maupiti and Mangareva may have had a harder time bouncing back after environmental degradation.

Rai’atea is a blend of dry and wet island characteristics. It is mid-aged geologically, larger than Maupiti—but Rai’atea has a better reef than Mo’orea. Due to this blend in attributes, Kahn explained, Rai’atea should help serve as a reference point when comparing Mo’orea and Maupiti. However, drastic landscape change can be found on all of the islands.

Kahn and her crew use a variety of methods to assess how the islands have changed after being peopled. Carbon-dating the pollen and charcoal recovered from archaeological sites allows Kahn and her team to calculate when the islands were first settled.

“We know that things like taro were introduced, so we can look for taro pollen in our coring and we know that is when humans started to arrive,” Kahn explained.

Insect species are also valuable for tracing the chronology of the islands’ habitation. The islands are so isolated that most species of insects could only arrive as stowaways, often in the soil adhering to the plants that were transported in the canoes. Therefore, identifying and dating various insects provides the researchers another set of markers to determine when Polynesians arrived.

Kahn collaborates with paleo-entomologist Nick Porch, assistant professor at Deakin University in Australia, on the identification and interpretation of insect species. Another member of the team is wood charcoal specialist Emilie Dotte, a researcher at the University of Western Australia, who helps Kahn examine charcoal from the island middens to determine the species of the trees from which the wood was cut.

Kahn explained that the process allows the M3 team to virtually reconstruct the forests that grew on each island and to compare the natural forest to the man-made one that came to be.

Faunal analysis is also essential to Kahn’s research. The size of animal bones that the Polynesians ate allows the team to determine if there was any variation in the size of individual species since human arrival. Much of the sorting and classifying of the bones is done by William & Mary graduate and undergraduate students.

Kahn explained that when the first settlers appeared, they brought a wide array of foodstuffs such as pig, dog and chicken, in addition to breadfruit, taro and bananas. On the wetter islands, such as Mo’orea, taro grew very well. However, the drier, more arid climates such as Maupiti presented more of a challenge to the Polynesians trying to grow taro according to Kahn. Taro can grow in the drier environment of Maupiti, but it does not produce as much as when it is grown under wet conditions such as that found on Mo’orea.

In an attempt to grow enough crops to sustain the island, Polynesians had to use methods such as slash-and-burn agriculture. This process involved allowing the land to go fallow for periods of time and then burning the brush before replanting seeds. Kahn said slash-and-burn methods caused a huge amount of change to the islands’ landscape. She found huge deposits of charcoal at archaeological sites at the base of mountains, shifted downhill by landslides.

“On Mo’orea we have sites that are buried under three meters of soil,” Kahn said.

Kahn and her team use radiocarbon dating of pollen and charcoal to determine the time the landslides occurred. Since the charcoal was found in the midst of these pollen cores, Kahn can conclude that the burning techniques were what caused the landslides to occur.

One of Kahn’s research questions concerns the change in land and marine ecosystems. Her team has examined thousands of fish and animal remains. They were specifically looking for signs of overexploitation, as revealed by changes in bone size or density over time.

“We are not finding a huge change in the size of shellfish over time,” Kahn said. “So this is interesting for thinking about sustainability and dealing with climate change in modern populations.”

Evidence of landscape change was found on all the islands, although Mo’orea does seem to have been more resilient than Maupiti, which is just what Kahn and her research group were expecting.

Not everything has unfolded according to expectations. For one thing, the archaeologists were surprised to see that Mo’orea’s lagoon did not demonstrate significant signs of overexploitation. Mo’orea’s lagoon is larger and richer than Maupiti’s, for instance. Kahn said she was expecting to find signs of overfishing there because she assumed the lagoon would have been the focal point of the islanders’ resource extraction due to its size and abundance.

As Kahn explained, there are multiple examples from all of the islands that indicate that Polynesian settlers had to make changes to accommodate for environmental degradation. Several hundred years of sustained agriculture had been hard on the land, and eventually Polynesians had to adjust their methods.

She has found archaeological evidence of the introduction of terrace gardening and arboriculture, both of which are more sustainable practices than slash-and-burn. Terrace gardening allows for soil retention and works against soil erosion by building terraces for planting into the slopes, while aboriculture allows for multi-cropping and extends harvest periods. These environmentally friendly techniques are found later in the island’s history, after environmental problems related to slash-and-burn methods started to show up.

“Our project is showing that human populations are not inherently conservationist,” Kahn said. “They have to learn to be conservationist and it is usually during a period of real stress.”

For instance, Patrick Kirch, a professor at the University of California, Berkeley and a collaborator on the M3 project, found strong evidence to suggest that the Mangarevans had to get rid of pigs in late prehistory before Europeans arrived. Though pigs were integral to the Polynesians’ diet, the swine became competitors for resources with humans.

Kahn believes that once the pigs started infringing on the Mangarevans’ other resources, they found that eliminating the pigs was more in their interest than attempting to keep them on the island.

“Sometimes people have to make really hard decisions,” said Kahn. “That’s what allowed their community to be able to be resilient through time.”

“Terrestrial birds are very important in soil rejuvenation, as they replenish phosphorus into the soil,” Kahn said.

Kahn explained that the involvement of the current Polynesian populations in her work has always been a necessity as she studies their ancestors.

“I always hire local people to work for me,” Kahn said. “They are very interested in knowing what happened on their island.”

Today’s Polynesians are not unaware of the effects of climate change that is happening around them. Kahn says she’s used to fishermen saying, “Oh yes, the fish are definitely smaller, there’s definitely fewer turtle.”

Her work with the islanders allows Kahn to discover some tools from the past that are still used today—but made with modern materials. Kahn described a coconut scraper made from pearl shell and said the Polynesians still use coconut scrapers of the same design. The only difference is today’s scrapers are made of metal.

Kahn says that the scraper is an example of the persistence of the Polynesian culture through time, showing resilience not only of the islands themselves but also of the island people themselves.