Ginger Ambler ’88, Ph.D. ’06, William & Mary’s vice president for student affairs, has been deeply involved with the campus community since her time as an undergraduate. Her connection to the university has helped her excel not only in her work with the Division of Student Affairs, but also in helping individual organizations reach their full potential.

In recognition of Ambler’s exceptional commitment to fostering a rich environment for fraternity/sorority life at William & Mary, the Association of Fraternity/Sorority Advisors (AFA) has honored her with the 2015 Dr. Kent L. Gardner Award. The AFA will present Ambler the Gardner Award during the AFA annual meeting in Fort Worth, Texas, on Dec. 5. 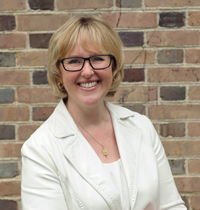 “I was surprised and honored to learn that I had been chosen to receive the 2015 Gardner Award,” said Ambler. "Shortly after hearing the news of my selection from AFA’s national leadership, I even received a personal call from now-retired Dr. Kent L. Gardner himself. Fraternity and sorority life has long enriched the student experience on our campus, and I am especially proud that William & Mary is the birthplace of the American college fraternity (1776).  Together with exceptional colleagues in the Division of Student Affairs, I am committed to supporting our sorority and fraternity communities in living up to their highest values of leadership, scholarship, friendship and service.”

In announcing the award, the AFA noted that Ambler “has been an active stakeholder in the fraternity/sorority experience on her campus” throughout her time in Student Affairs.”

The AFA annually presents the Gardner Award to a senior college or university administrator who has demonstrated a long-term commitment to advancing fraternity and sorority life.

According to the AFA’s criteria for the award, recipients “have demonstrated a long standing record of support and advocacy for the fraternal experiences on the campuses on which he or she has worked, fostered positive change in the fraternity and sorority community, built partnerships within higher education and the interfraternal community and mentored both new and seasoned professionals.”

Staff members across the campus and alumni nominated Ambler for the award and cited both her prominent visibility in advocating for fraternity and sorority life on campus, as well has her mentorship of future student affairs and higher education professionals, many of whom have gone on to advise fraternity and sorority communities in their nominations.

“The most visible and tangible example of Ginger’s support of the fraternity/sorority experience is not just in the building of the new fraternity houses several years ago, but it is in the leadership she brought to that entire process,” said Jennifer Leung, associate director of student leadership development, in her nomination. “From start to finish, Ginger was engaged in the process, one that was approached with great thoughtfulness and intentionality.”

This is not the first time that the AFA has recognized people at William & Mary for their work with the fraternity/sorority community. Last year, Anne Arseneau, William & Mary’s director of Student Leadership Development, received the AFA’s Robert H. Shaffer Award, in recognition of her long-term commitment to fraternities and sororities. In 2011, Leung served as the annual meeting chair for the AFA.