Climate change and Mideastern geopolitics are often in the news. A recent study by Elizabeth Canuel, a professor at William & Mary's Virginia Institute of Marine Science, and colleagues in the U.S. and Iran extends these topics back to the dawn of human civilization, showing links between drought and the fall of Fertile Crescent empires as far back as 4,200 years ago.

The study, published in Quaternary Science Reviews, used chemical and geologic tracers from sediment cores collected in northwest Iran to reconstruct a high-resolution history of precipitation in the region back to the waning of the last ice age 13,000 years ago. The study’s lead author was Arash Sharifi of the University of Miami’s Rosenstiel School of Marine and Atmospheric Science (RSMAS).

Canuel’s lab studied changes in the amount of organic carbon along the length of three 7.5-meter cores, which were recovered from a peat bog near the headwaters of the Tigris and Euphrates rivers. Higher carbon concentrations reflect abundant growth of marsh plants during wetter periods, while lower carbon concentrations reflect drier conditions and reduced peat accumulation. 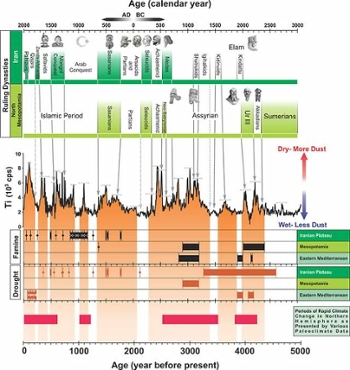 Sharifi and other members of the research team dated the core and analyzed changes in the concentration of elements associated with windblown dust. Team members hail from labs at the University of Southern California; University of California, Irvine; Mediterranean Institute of Marine and Terrestrial Biodiversity and Ecology in Marseille, France; and the Iranian National Institute for Oceanography and Atmospheric Science in Tehran.

Taken together, says Canuel, the core data point to eight major episodes of Mideast drought since the last ice age. Comparison with historical and archeological evidence shows that the drier conditions coincide with transitions in several of the major civilizations across this region over the last 5,000 years.

Most notably, the research confirms evidence from an earlier study suggesting that the fall of the Akkadian Empire 4,200 years ago coincided with an episode of exceptionally high input of windblown dust to the Arabian Sea. Akkad is sometimes regarded as the first empire in history. After its fall, the Akkadian people eventually coalesced into the nations of Assyria and Babylonia.

“Our study shows that natural variations in climate have been an important influence on past civilizations and societies,” says Canuel. “As a result, we need to think carefully about some of the unintended and unexpected outcomes of anthropogenic climate change such as increased tensions and political instability in regions of the world that are most sensitive and vulnerable to its effects.”

One of those regions is the Middle East, where regional models project that climate change will lead to higher temperatures and more frequent droughts. “Water scarcity is, and will continue to be, an important concern in the region,” says Canuel. “While there are many reasons for the recent conflict in Syria, there are some who think that a prolonged drought and water scarcity between 2006 and 2011 contributed instability to this region by displacing people from rural, agricultural regions to urban areas.”

In an ironic twist, the events that led to a study of Mideast drought had their roots in a flood of epic proportions—the inundation of New Orleans following the passage of Hurricane Katrina in 2005.

“Following Katrina,” says Canuel, “I contacted several of my colleagues at Tulane University and offered refuge to them or their students in my lab.” One of those students was Ali Pourmand, the individual who conceived the Iranian core project. 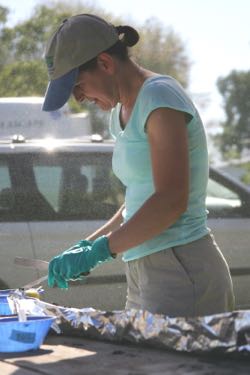 “Ali ended up spending an extended amount of time in my lab during his dissertation,” says Canuel, “an experience that convinced him of the value of cross-training students in the combined use of organic and inorganic proxies for paleo-research. We initiated the Iranian collaboration soon after he started his current position as an Assistant Professor at RSMAS.”

Lead author on the Iranian-core paper — Arash Sharifi — is a doctoral student in Pourmand’s lab. “Arash has visited my lab at VIMS for two extended periods,” says Canuel, “and worked closely with my research team to learn how to perform the organic analyses. My technician Erin Ferer-Tyler and grad students played a significant role in training Arash and performing the analyses and my entire program benefited from Arash's extended visits, both scientifically and culturally.”

Pourmand says the core study “is the first of its kind from the interior of West Asia and unique in its resolution and multi-proxy approach.”

Sharifi adds, “The high-resolution nature of [the cores] afforded us the rare opportunity to examine the influence of abrupt climate change on early human societies. We see that transitions in several major civilizations across this region, as evidenced by the available historical and archeological records, coincided with episodes of high atmospheric dust; higher fluxes of dust are attributed to drier conditions across the region over the last 5,000 years.”