The event, which begins at 8 p.m., is free and open to the public. Doors open at 7:15 p.m., and seating will be offered on a first-come, first-served basis. Overflow seating will also be available. 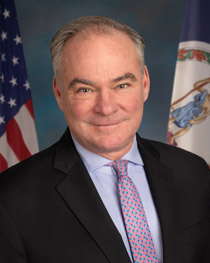 Kaine will join Gates, a former U.S. secretary of defense and CIA director, to discuss their personal journeys as public servants, learning from the past to shape present-day foreign policy and the future of U.S. leadership in a rapidly changing world. Samantha Custer, director of policy analysis for AidData at W&M’s Global Research Institute, will moderate the discussion. William & Mary President Katherine A. Rowe will introduce the talk.

A history major at W&M, Gates went on to a long career in public service. In addition to leading the CIA and defense department, Gates also led Texas A&M as its president. He is currently a partner with the consulting firm Rice, Hadley, Gates & Manuel LLC.

Kaine has visited W&M many times throughout his career. In 2006, he served as the  Charter Day speaker and received an honorary degree from the university. He has also served as a speaker at such events at W&M Law School’s graduation ceremony in 2016 and the 2014 W&M Coastal Policy Conference.

Editor's note: This story, originally published Jan. 30, 2020, has been updated to reflect the addition of U.S. Sen. Tim Kaine to the event.