“Scroll down.” This now-colloquial phrase guides us through the digital theatre production Rich Kids: A History of Shopping Malls in Tehran, digging us deeper and deeper down a social media rabbithole “like a demented Instagram geologist” as the show examines the costs of the entitled opulence and careless consumerism of the outrageously wealthy, by exploring the social media phenomenon @therichkidsoftehran.

Back in 2014, this Instagram account entered the global spotlight as audiences around the world were engrossed by the images and media posted by the young children of the elite in Tehran, Iran. In a country where alcohol is banned, and women must dress modestly, the account presented shocking photos of wealthy Iranian youth in revealing clothing, drinking illegal booze, and otherwise flouting the many sanctions and moral laws dictating behavior to instead revel in decadence. Rich Kids: A History of Shopping Malls in Tehran immerses us in their world, taking us into the scandal, history, politics, and environment that created them.

Rich Kids is the second in a trilogy penned by The Javaad Alipoor Company’s eponymous British-Iranian founder, intended to critique technology’s role in stratifying further the worldwide wealth gap, and humanity’s inability to grasp the consequences of our unfettered and unchecked so-called “progress” on this Earth. While originally performed live and in-person for audiences when it premiered in the UK in 2019, the show was converted into a digital experience after its planned tour was canceled in the wake of the COVID-19 pandemic. Rich Kids, however, is not an average Zoom show. Taking advantage of Instagram's posting and live streaming capabilities, the play uses the platform the way it was designed: to tell a full story in almost real time and display the “tastes and ambitions” of its users, all in service of showing the world just how you came to be the way you are now. 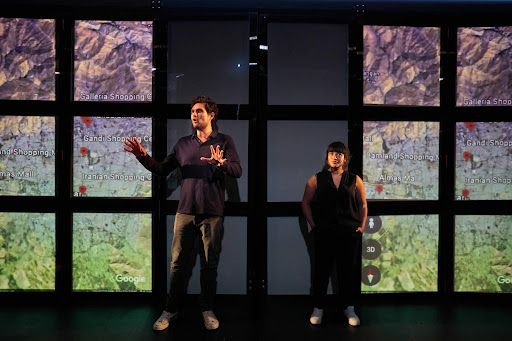 Narrated and performed by Alipoor and co-star Peyvand Sadeghian, the show loosely follows the ill-fated story of lovers Parivash and Hossein (the first, a middle-class girl, the second, one of the show’s eponymous #richkids) backwards in time, from its end in a car crash back to its beginning as seen on Instagram, the audience’s window into the couple’s narrative.

Via their masterful use of multimedia and multiple platforms to conduct their show, Javaad Alipoor creates a shockingly immersive theatrical experience in the privacy of your own home. An all-enveloping sound design hums and thrums from both computer and phone accompanied by smoothly disorienting visual effects to create a fever dream of an environment as Alipoor and Sadeghian take the audience on a chaotic, kaleidoscopic trip through time and space.

Ultimately, Rich Kids leaves its audience with more questions than answers, interrogating our concepts of time, history, the march of human progress, and what we leave behind. The story of the #RichKidsofTehran, the show tells us, is why it is so important we know how we came to be, so that hopefully, we can see where we may well be going--and fix it before it’s too late.

The Javaad Alipoor Company virtual residency follows that of Asian Centennial Distinguished Theatre Fellow Rinabeth Apostol, which together comprise the Asian Centennial residencies in the Department of Theatre, Speech, & Dance. Founder/creator/writer/performer Javaad Alipoor visited a variety of theatre classes to talk to students about the company’s work and answered questions about the piece and his process. He also gave a public artist talk virtually Friday Nov. 5th at 12pm in the Commonwealth Auditorium in Sadler as part of the APIA’s Banh Mi Speaker Series, Asian Centennial Edition.