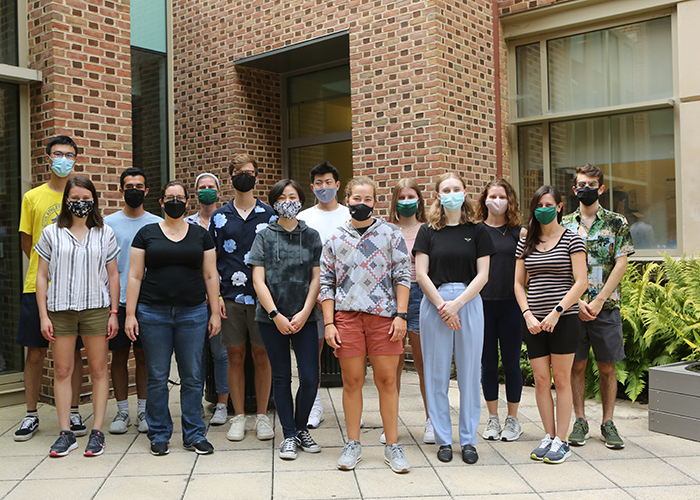 Over half of the world's population lives in cities, and in the U.S., the largest and most populous cities tend to be on coasts.

For New Yorkers, Upper Manhattan is known as the site of Grant's Tomb, the Apollo Theater, The Cloisters, Sylvia's Restaurant and Sugar Hill. For W&M chemist Rachel O’Brien and a team of colleagues, the slice of city is the ideal marine-urban interface to study changes in the Earth’s atmosphere and its potential impacts on air quality and climate.

O’Brien, assistant professor in William & Mary’s Department of Chemistry, and her co-PI Andy Ault, associate professor of chemistry at University of Michigan, were recently awarded a $600,000 grant from the National Oceanic and Atmospheric Administration’s (NOAA) Atmospheric Chemistry, Carbon Cycle, & Climate (AC4) program to further understand the atmospheric interactions between megacity and marine environments.

Together with researchers from multiple institutions, including the University of Michigan, University of Washington, Colorado State, UC Irvine, Georgia Tech, Columbia, Yale, and the University of Minnesota, O’Brien and Ault will examine the potential impacts of anthropogenic and marine emissions in coastal cities.

“Many of the U.S.'s largest cities are located on or near coastlines,” O’Brien said. “And urban populations are projected to increase dramatically in the coming decades. That makes it especially imperative to understand the atmospheric chemistry affecting both climate and air quality in major cities.”

O’Brien has devoted her career to the study of aerosols, particles that are created when fine solid bits or teeny liquid droplets are suspended in air or another gas. Dust, haze and smoke are all examples of aerosols. Carbon-based molecules, carried by aerosols in the atmosphere, can have large impacts on climate, air quality, human health and the environment.

According to the NOAA, cities are estimated to account for roughly 70% of the global fossil carbon dioxide emissions, and the compound is the largest influence on global climate change. In addition to climate concerns, the team will study air pollution, the fifth largest human-health risk factor globally and a public health concern in megacities around the world, according to the NOAA.

O'Brien and Ault's project hits on a key programmatic focus for the NOAA: better understanding the impact of understudied VCPs on ozone and aerosol formation, and their relative importance to urban air quality.

In urban atmospheres, volatile chemical products or VCPs (coatings, adhesives, inks, personal care products, cleaning agents, etc.) are emerging as a major source of volatile organic compounds (VOCs), a class of aerosols that are emitted into the atmosphere, O’Brien explained. Some VCPs are harmful in and of themselves, such as those known to cause cancer, but they can also react with other gases and form other air pollutants after they are in the air.

The emissions and impacts of VCPs on atmospheric chemistry are not well understood, O’Brien said. Add in the presence of nitrogen oxides and the oxidation of ocean-emitted dimethyl sulfide in marine environments and the particles undergo chemistry that leads to the formation of ground-level ozone and aerosols. Both ozone and aerosols are harmful for humans to breathe and they can impact solar radiation, cloud formation and climate – all of which have potentially serious long-term repercussions for public health.

The team of researchers, which is slated to include W&M graduate and undergraduate students, will use mass spectrometry with spectroscopy to analyze aerosol particle samples from two NYC-Metro Area field sites. The collection sites, managed by chemists Drew Getner, Jordan Krechmer, and Andy Lambe from the company Aerodyne and Yale University, are run in coordination with Atmospheric Emissions and Reactions Observed from Megacities to Marine Areas (AEROMMA) and the New York City metropolitan Measurements of Emissions and TransformationS (NYC-METS) campaign.

Ultimately, the information they produce will be used to inform climate modeling and provide greater insight into changes in the city’s environment, O’Brien explained. She says the team plans to provide timely information to environmental managers and other stakeholder groups on the potential public health impacts from VCP emissions and fossil fuel sources.

She also hopes the work will reduce the levels of uncertainty in global climate models due to the fact that marine aerosols from biogenic sulfur emissions are currently underrepresented in the data. Overall, she adds, the urban and marine datasets will improve the representation of emissions and chemical and physical processes in the next generation NOAA’s weather-chemistry models.

“Our experiments will help us determine how the chemicals we use every day can end up contributing to harmful air pollution and climate in urban areas,” O’Brien said.