Ornithology students at William & Mary traditionally travel the commonwealth, piling into vans at 3 a.m. to head out to where the birds are.

It’s off to the West Virginia border to see warblers and raptors, or to the Eastern Shore for an introduction to the arcana of the field marks that distinguish gull species. But not this year.

“Because of the pandemic, we can’t get in the van together,” said Dan Cristol. “So we’re doing it all on foot.”

It’s been a surprisingly rewarding experience, he said, partly because William & Mary is a pretty birdy place in its own right. Cristol, Chancellor Professor in the university’s Department of Biology, has been teaching Biology 416, Introduction to Ornithology, at William & Mary for 25 years.

Last year’s state-trekking Ornithology class logged 265 species sighted in Virginia. Cristol says an assiduous birder can reasonably expect to find 100 species on the William & Mary campus. If this semester’s class is missing out in terms of variety, their socially distanced birdwalks around campus have compensated by allowing the class to visit and revisit and recognize individual birds.

For starters, there’s the wild turkey of Griffin Avenue.

“Right across from Barksdale Field,” Cristol said. “A turkey has moved in there. She’s not there very often, but she’s very aggressive. We’ll walk down the middle of the street and this hen turkey comes out, charging at us.” 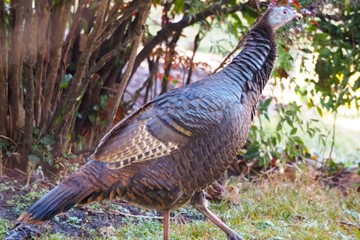 The turkey has no hesitancy about getting up in the business of a group of large, masked, binocular-bearing creatures. Cristol said the turkey gets so close that student cell-phone snapshots look like a telephoto lens was used.

Other birds react to the recurring presence of the ornithologists in less confrontational ways. For instance, the mallards on Lake Matoaka seem to understand that the class means them no harm.

“They’re pretty tame,” Cristol said. “When they see us now, they paddle away slowly instead of taking flight.”

It is axiomatic among birders that wintertime is duck time and an ornithologist can mark off a decent number of waterfowl species by regular binocular scans of the surface of Lake Matoaka. This year, pickings have been just a bit on the slim side.

“There’s about 30 gadwall, about 15 bufflehead, maybe 20 ring-necked ducks,” he said. “Say about 10 pied-billed grebes, some Canada geese — but normally we also get a smattering of other ducks that come through.”

The smattering has been smaller than normal — a goldeneye, the odd canvasback. Cristol attributes the low duck count to a mild winter immediately to the north. Ducks aside, Cristol said that it’s been a very good birding year at William & Mary.

“We’ve got species from the far north that we don’t normally have, due to a failure of the boreal forest tree-seed crop,” he said. “We’ve got red-breasted nuthatches, pine siskins and purple finches — normally none of those are present in any numbers.”

When waiting for a waterfowl influx on Lake Matoaka, the class can head to the blind and feeder array at the Keck Environmental Laboratory to see some of those northern birds. Cristol set up a COVID-safe blind complex with the viewing holes six feet apart, large enough to accommodate a lab section. The students are told to be on the lookout for an evening grosbeak, but it hasn’t materialized yet.

“They're around town, but we haven't actually seen one on campus. Those are birds that are almost never present,” Cristol said. “I've only seen evening grosbeaks on campus maybe two or three times in 25 years.”

The birding expeditions are part of the lab component of the class. Cristol says he has lab four days a week, dividing the class into groups of seven. He leads each group of seven around the likely places on campus. They often see the same bird time after time.

“The students get to know them like individuals: ‘Oh, the phoebe is over on this side of the pond today. I wonder why?’” he said. “So they're just having a completely different experience than normal years. Every person is just seeing every bird and getting to know him as an individual. We're starting to recognize some of the individuals by their songs, which are unique.”

A deeper acquaintance with a smaller number of bird species has produced other interesting educational opportunities. For instance, the class is mulling the puzzling crow-owl relationship. This year also has been a good one for hawks and owls; Cristol says he thinks it has to do with the burgeoning squirrel population on campus.

Barred owls and great horned owls are common around campus, as are two species of crow — the familiar American crow and the fish crow, whose sardonic call distinguishes it from the cawing American crow.

American crows have a habit of harassing owls, behavior that Cristol says is known as “mobbing.” A barred owl will just be sitting on a branch, chilling, and the crows will fly around it, dive-bombing and harassing. He said one of the strangest aspects of mobbing is that sometimes the crows will attack a vacant branch if it was the site of a mobbing the day before. Cristol pointed out that vacant-branch mobbing is a phenomenon that students of previous years would not have been able to detect in their manic race to observe as many kinds of birds as possible.

“The students are really fascinated by how the crows attack the owls,” Cristol said. “And so we're having them come up with hypotheses for why crows do that. Which is good: No one's ever actually figured out definitively why crows are obsessed with attacking owls, but they are.”

Cristol speculates that the university’s adaptations to operation during a pandemic may have made the birds less wary, a boon for birders.

“There are plenty of students here, but now we don’t have that huge march every 50 or 80 minutes, as students go from class to class, flushing the birds,” he said.

Cristol said he has come to appreciate the benefits of the kind of closer, deeper ornithology that was thrust upon him by the circumstances of the pandemic.

“This class is fundamentally about learning to see what’s in front of you as a biologist,” Cristol added. "The first step of the scientific method is observation, and the pandemic is providing an opportunity for more thoughtful observation of campus birds. It’s something I might have classes do more of in the future.”