Work to expand one of William & Mary’s iconic brick pathways came to a sudden stop recently when a previously unknown access point to an early 18th-century drain was uncovered.

The existence of a vaulted brick drain leading from the Wren Building to the Sunken Garden has been known for years, but the access point was a surprise, according to Historic Campus Executive Director Susan Kern.

“It looks like part of the vaulted drain tunnel had collapsed at some point — probably in the late 19th or early 20th century — and they had put in this box to open that up, to stabilize it and basically repair it,” she said. “We knew the open drain was here, but all of a sudden, we’ve learned all kinds of things about it.”

Archaeologists and architects began work last week to continue that learning while exploring ways to both preserve the drain as an artifact and stabilize it.

The discovery of the drain was made June 12 as work began on a project to widen the pathway in the Wren Building’s courtyard from 8 feet to 10.

As construction workers pulled up the brick and concrete slabs underneath, the access point was uncovered, exposing the inside of the drain for the first time in centuries. Inside it, Kern and staff from the William & Mary Center for Archaeological Research found artifacts from the early 18th through the 19th centuries, including lead window cames (lead pieces holding glass window panels in place) from casement windows and glass from wine bottles.

“So it’s clear this drain was collecting stuff throughout the 18th and 19th centuries, including from the period when William & Mary’s labor force was enslaved,” said Kern. 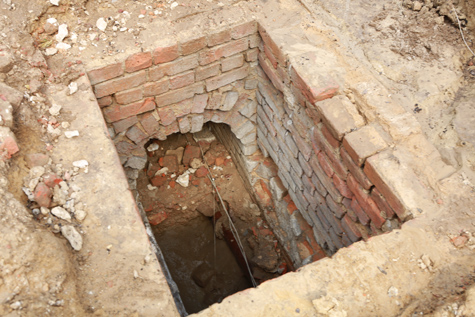 They also found the late 19th- or early 20th-century terracotta drain pipe that was laid in the drain when either Benjamin Ewell or Lyon Gardiner Tyler was president of W&M. Wires — possibly telephone wires — are also visible, and Kern thinks they were placed there sometime in the 20th century.

The interior of the drain is about 23 inches wide and 51 inches high, and it's at least 300 feet long.

Drains were very common in the 18th century, especially in buildings with kitchens, said Kern. Originally, the drain ran from underneath the center of the Wren Building, intersecting with one from the kitchen under the Great Hall before leading out into where the Sunken Garden (not a part of W&M originally but an addition in the 1930s) is today.

The earliest references to the drain are from 1702, when people were complaining about it stinking, said Kern. The next reference comes from 1710-1716, when Gov. Alexander Spotswood helped guide the re-engineering of the Wren Building after a 1705 fire — the first of three at the building.

“He raises the grade of the east yard of the building by about 3 feet to change the drainage and inserts this drain,” said Kern. “I’m wondering if he inserts a whole new drain or maybe he re-engineers and rebuilds the 1702 drain.”

The drain ceased to function around 1929 when the Wren Building was restored as part of John D. Rockefeller Jr.’s restoration of Colonial Williamsburg, said Kern. A photo from that time period shows workers removing the terracotta pipe from the drain under the Wren Building. A few years later, the end of the drain was removed with the installation of the Sunken Garden.

“At that point, it becomes obsolete, and this ceases to function as any kind of drain,” said Kern.

When the access point was discovered and drain exposed, Kern sought the help of archaeologists and architects who have worked with similar structures in the past, including two alumni: Nick Luccketti ’71, archaeologist for of the James River Institute for Archaeology; and Andy Edwards ’71, who was the longtime head archaeologist for Colonial Williamsburg. Several vaulted drains run under the streets of Colonial Williamsburg’s historic area, near the center of town by the magazine. 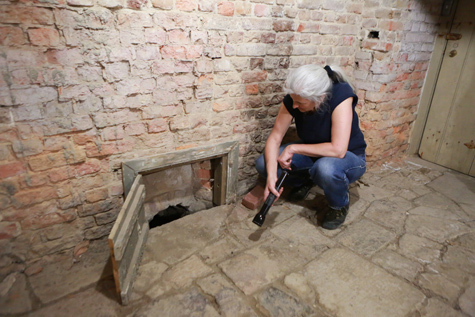 A number of other 18th-century historic sites in Virginia also have vaulted drains. Preservation architects with the firm of Mesick Cohen Wilson Baker Architects have worked with many of them, and they will also work on this project.

Because of safety concerns, no one has yet been inside of the drain, but Kern expects the preservation architects may use technology like laser scanning to explore the structure and its stability. Another researcher from Jamestown who works on remote sensing may use ground penetrating radar to explore the space.

“They’re going to do whatever they need to do to understand the structure and what we need to do responsibly,” she said. “It would be fabulous to figure out how we record the inside of this. Our quick and unexpected peek this summer is an opportunity to evaluate the research potential for a larger research project in the future.”