A visit to the 'whomping pit'

The Costume Shop in Phi Beta Kappa Memorial Hall looks like the result of an experiment that spliced genes from Hogwarts Academy, your grandmother's basement, an Elizabethan fabric store and one of the world's classier sweatshops.

A washer and dryer sit inside the entrance, across from dye pots large enough to be used as props for the opening scene of Macbeth. There is a rack holding dozens of scissors, from tiny nippers up to lethal-looking things big enough to shear sheep. Bolts of cloth line the far wall, beyond an array of sewing machines, some of which may be from Patricia Wesp's personal collection. 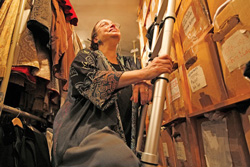 "My mother asked me, ‘Why on earth do you need sixteen sewing machines?'," Wesp said during an impromptu tour of her domain. "I said, but mom, you're the one who gave me number fifteen."

In the weeks and days leading up to opening nights for stage productions of the Virginia Shakespeare Festival and the William and Mary Theatre, the Costume Shop validates all the usual clichés associated with work performed under an approaching deadline-beehive, hub of activity, whirlwind. Wesp says the technical term for the Costume Shop in a state of high productive frenzy is "whomping pit-as in a pit where whomping has occurred." She has an office upstairs in PBK, but don't bother dropping by. During the final week of the Virginia Shakespeare Festival's final production of the season, Wesp said "I haven't been in my office for probably six months."

Adjacent to the Costume Shop is the stockroom, crammed with approximately ten gajillion costumes, hats and accessories. Uniforms, gowns, tuxes, dresses, clown suits, doublets, tunics and other items that go on hangers stretch to the ceiling on racks to your left. On your right are shelves loaded with boxes bearing such labels as "Bowler hats" and "18th-Century corsets," again stretching to the ceiling.

"If you don't know where something is," Wesp said, "the first place you look is in the bra box. It's practically the first box you come to and things have a tendency to just get jammed in there."

Items have been accumulating in the stockroom since 1958. Wesp said that smoke damage from a 1991 fire required the contents of the stockroom to be sent out for cleaning and the inventory at the time exceeded 50,000 pieces. "I think we have twice that number now," she said.

Anyone visiting the stockroom for the first time would be willing to bet money that its contents could dress the casts for a Shakespeare extravaganza, involving the simultaneous presentation of all of the Bard's 38 plays in full period costume, tossing in productions of the major works of Ibsen, Shaw, Aristophanes and Tennessee Williams. But it doesn't work out that way; for a number of reasons, new costumes must be designed and created.

"We have well over a hundred capes in here, and I always think there's no reason we should ever have to make another cape," Wesp said. "But we always have to make one or two for each production."