The following story originally appeared in the summer 2012 issue of the William & Mary Alumni Magazine - Ed.

In 1974, Howard Scammon ’34, William & Mary professor of theater, hovered in the Manhattan shadows waiting to catch a glimpse of his prodigy. Then the moment arrived — a recently graduated Glenn Close ’74, D.A. ’89 approached the old Helen Hayes Theatre stage door on 46th Street.

After holding national auditions, the Phoenix Theater Company had selected Close to perform in a series of three plays that year. Before entering the theater, Close glanced across the street at the dimly-lit outline of her mentor. With a glimmer of recognition she ran across the street. “Howard, what are you doing?” she asked.

Scammon responded: “I just wanted to see you walk in the stage door.” 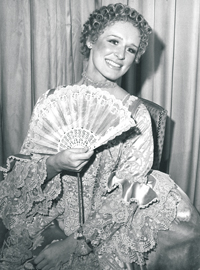 Retelling the story almost 40 years later in a nearby café in the West Village, the emotion and gratitude are evident in her voice. Years earlier, Close came to William & Mary as a 22-year-old aspiring actor, where she landed under the wings of Scammon, one of her great mentors.

“The first thing I did when I went [to W&M] was to go to the theater department and audition for Twelfth Night, which was the first play of the year,” says Close. “I remember I was in biology lab and Howard walked through the door with his hair, his baggy shorts and flipflops. He asked if I knew I had a callback and that began my wonderful experience. It was the first time I really was able to focus on what I wanted to do for my life.”

Scammon was but one professor who made a lasting impression on Close. “The professors had great character,” she says. “Some of them were very eccentric. All the ones that I had were extremely good and basically kept me curious.”

“I think that what I took away from my education at William & Mary, which was very obviously focused in liberal arts, was [that] the purpose of a liberal education is to keep you curious for the rest of your life,” says Close. “I think that is the greatest thing. … And that it has.”

As a young girl in Connecticut, Close knew she wanted to be an actor from an early age. She performed in almost every theater production at William & Mary during her four years. Her dog Penny was usually by her side, as are her dogs Bill and Jake today.

“Penny went with me to all my classes and she knew the theater department very well,” says Close. “During a performance of The Miser I was on the top of a platform and I had a line, ‘May the fever seize you, you beggarly dog and send you to hell,’ or something like that, and I got this huge laugh and I thought, ‘hmm.’ I didn’t know why everyone was responding by laughing. I looked down and Penny had gotten out of the dressing room and she had found her way down the aisle and gotten up on the stage and she was standing there barking and woofing around. She got the best response of anyone that entire night.”

Through the years, her dogs have been on many stages and in many dressing rooms. With an abundance of stage and film roles to her credit, she has developed into one of the most acclaimed and versatile actors of her generation, receiving six Oscar nominations, three Grammy nominations, three Tony awards, three Emmys and two Golden Globes. Her versatility may be most evident in what she asserts as one of her greatest challenges — bringing the story of Albert Nobbs to the screen 30 years after her Obie award-winning performance on stage. Taking 14 years to develop the film from the original material, Close cowrote, produced and starred in the critically acclaimed 2011 film.

“Everybody has a story. And I think that one of the things Albert Nobbs taught me is that there are no little dreams,” says Close. “In some ways, the process was pretty much perfect as far as the team. The fact that we got three Oscar nominations for our little movie was incredible. We had a smaller company, not millions and millions of dollars to spend, and that always makes a big difference. As far as a pure creative process, it is one of the best I’ve ever been a part of.”

Close’s first Oscar nomination was one of the biggest surprises of her career. While on the set of The Big Chill, she was informed of her nomination for best actress in a supporting role for her portrayal of Jenny Fields in The World According to Garp, her film debut.

“The first time’s pretty great and it will never be quite the same,” says Close. “It was the furthest thing from my mind. It was such a virginal moment for me to realize that you are being singled out in that way.”

One of the few film heavyweights to transition to television, Close just finished taping the final season of Damages, winning two Emmys and a Golden Globe to date for her portrayal of the ruthless lawyer Patty Hewes, one of her many roles-of-a-lifetime. “She was a great character, she was fun,” says Close. “I think it was a five-year-long work of true art that I’m very proud of.”

When considering a role, Close looks for something challenging that she hasn’t done before. Intensely dedicated to her craft, she values the spiritual and soulful aspects of art. “There’s something about great art that has the capacity to rearrange you in a way, whether it’s a certain series of notes in a great classical piece of music, a Monet painting or a great soliloquy. I think that is common to all humanity, that it becomes a uniting factor and I think something happens.”

To aspiring actors and artists, Close contends that it is not about red carpets and fame. “It’s all about learning your craft,” she says. She points to Malcolm Gladwell’s book Outliers and his claim that it takes 10,000 hours of deliberate practice to achieve mastery. “You gotta be in the trenches and that will show you a lot because you either will be able to deal with it or you won’t. It starts with a liberal arts education, letting yourself be kind of curious and then if you think you’re supposed to do something, if you’re compelled to do that, try it out. Go for it.”

Recently Close has taken on another role, attempting to erase the stigma and discrimination around mental illness through her nonprofit organization Bring Change 2 Mind. She has sat for numerous interviews and appeared on a variety of television shows to talk about eradicating the stigma of mental illness. With her sister, Jesse, who has bipolar disorder, Close taped a television and Web commercial that was directed by Ron Howard, who donated his time. John Mayer also donated his song “Say,” which serves as the anthem for the campaign.

“We’re actually at a very exciting point,” says Close. “It’s evolving. I think that our mission is going to be helping the connection between the science and the message. We just put together a world-class advisory council of stigma experts — researchers, scientists, psychologists, psychiatrists, sociologists and M.D.s. It’s a huge challenge and I find it really fascinating.”

Among her many awards and accolades, Close also treasures her collection of Jefferson cups, etched with the titles and characters of her first plays. They were gifts from Howard Scammon early in her career.

“As long as he could, he would come up and see everything I was in and then write me incredibly wonderful notes as if he was directing,” says Close. “They weren’t presumptuous and they were always right on. I had great respect for those notes.”