William & Mary theatre instructor and Virginia Shakespeare Festival actress Tamara Johnson will appear in a supporting role in the Hallmark Channel’s “Lake Effects” on May 6 at 8 p.m. 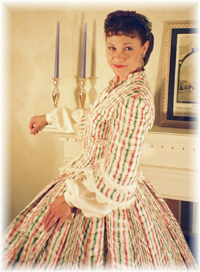 Johnson plays real estate agent Dottie Price in the film opposite stars Jane Seymour of “Dr. Quinn, Medicine Woman,” Madeline Zima of “The Hand that Rocks the Cradle” and Mary McDonough of “The Waltons.” The movie centers on a high-powered attorney who returns to her hometown after her father dies.

Later this month, Johnson will appear at the Piccolo Spoleto Festival in Charleston, South Carolina with her show “In Haste, Laura Keene” as part of its Virginia Shakespeare Festival tour. The show, which runs from May 28 to June 3 at the Threshold Theatre, is being directed by VSF Artistic Director Christopher Owens with extensive musical underscoring from the period researched by Johnson and performed by W&M Theatre’s Musical Director Gary Green.

Following her work in Charleston, Johnson will return to William & Mary’s campus to teach acting during the summer.