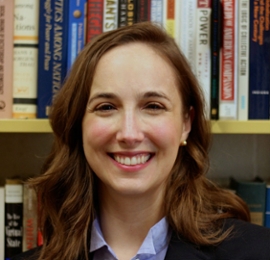 Professor Amy Oakes received her B.A. in Political Science from Davidson College and her Ph.D. in Political Science from The Ohio State University. Her research interests include the domestic causes of war and nuclear nonproliferation. Her work has appeared in Security Studies, Politics & Gender, International Journal, International Studies Quarterly, and Foreign Policy. Her book, Diversionary War, examines whether governments provoke international crises in response to domestic unrest and was published by Stanford University Press in fall 2012. In 2009-2010, she was a research fellow at the John F.  Kennedy School of Government at Harvard University. And she received the College's Alumni Fellowship Award in 2012 and was appointed University Associate Professor for Teaching Excellence in 2014. In addition to teaching in the Department of Government and International Relations Program, she is co-director of the Project on International Peace and Security (PIPS). PIPS is an undergraduate think tank at William and Mary created in 2008, which aims to produce rigorous and original foreign policy analysis.