Blackface, dark makeup worn by a performer in a caricature of the appearance of a Black person, is now widely considered unacceptable in mainstream American culture — but that wasn't always the case.

William & Mary professor Chinua Thelwell explores its history in the United States and abroad in his new book “Exporting Jim Crow: Blackface Minstrelsy in South Africa and Beyond.”

The topic is in the news again recently, as companies review branding that stems from minstrelsy for product lines such as Aunt Jemima and Uncle Ben’s.

“Blackface minstrel shows portrayed enslaved Black people as happy and content,” Thelwell said. “Aunt Jemima and Uncle Ben’s products sell a similar patronizing fantasy of smiling Black servant characters. Such products traffic nostalgia for American slavery and do not reflect the values of multi-racial democracy. These products should have been renamed or removed years ago.” 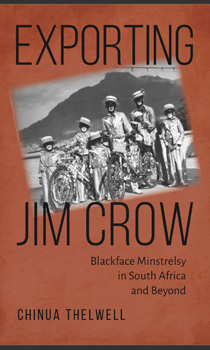 Thelwell and his family have fought against American racism and Jim Crow segregation for generations, and it helped guide Thelwell down a career path that led him to William & Mary as an associate professor of Africana studies and history.

He is also one of the founding faculty members of the university’s new Asian & Pacific Islander American Studies program.

“I have dedicated my professional career to the struggle for multi-racial democracy,” Thelwell said. “I’m proud to be part of an intergenerational movement for racial equality in the United States and abroad.”

That struggle was communicated in the recent PBS documentary series, “Asian Americans,” which included accounts of Thelwell’s grandfather and other relatives being banished to Japanese internment camps during World War II despite being American citizens.

That PBS would choose to tell his family’s story filled Thelwell with immense pride, but the painful details gave him feelings of sorrow and vulnerability.

Thelwell spoke to W&M News recently about his book.

When did you decide to study blackface minstrelsy and why?

Blackface minstrelsy is a racist genre of performance that began in the United States and was exported abroad. I first became interested in this topic when taking a history class as an undergraduate student. I learned that Commodore Matthew Perry, the United States naval officer who used gunboat diplomacy to force Japan into a trading agreement in 1853, brought blackface minstrelsy to Japan. Some of his crew members were amateur performers and they presented a blackface minstrel show during their stay. This history immediately resonated with me because I had always wondered about how these kinds of racist images got to Japan. I also thought to myself: “Where else did these minstrel troupes go?” Later, in graduate school, I learned that South Africa has an interesting and relatively understudied history regarding blackface minstrelsy.

What can we learn from your book?

My book is about America’s cultural imprint on the world. I have had opportunities to travel to countries in Africa, Asia, Europe, South America and the Caribbean and have always been fascinated by the large amount of American music that is played on the radio. Popular music is one of the most enduring cultural exports of the United States. My book demonstrates that this tradition of exporting American popular music to the world began with the blackface minstrel shows of the 1830s and 40s. Indeed, racist minstrel shows are part of America’s cultural legacy in the international arena.

We Americans need to acknowledge this history. Racist images and ideas that began in our country influenced the ways in which people thought about race in other countries. As such, those of us who are interested in advancing anti-racist perspectives must be ready to move beyond the boundaries of the United States. In short, we have to do more to challenge racism in the United States and abroad.

“Exporting Jim Crow” provides an introduction to blackface minstrelsy in the global arena. There are other scholarly sources on this topic. However, the book covers more cities and countries than any other source. In order to describe how blackface minstrel shows got to South Africa, I use primary and secondary sources to trace the transatlantic and transpacific touring circuits of the mid-19thcentury. These circuits linked San Francisco and New York to Honolulu, Melbourne, Sydney, Calcutta, Bombay, Durban, Cape Town and London among several other urban centers. “Exporting Jim Crow” is the most expansive study on transnational blackface, covering more locations than any other work of scholarship.

What progress do you think America has made in condemning blackface in mainstream culture?

Is America influencing other countries in the effort to eliminate these racist behaviors and images?

Yes, most definitely. Many American citizens understand the ugly history of blackface minstrel shows. And when we see these images in other countries, we can speak out. High-speed internet has really changed the global public discussion regarding blackface. Blackface images can travel across national borders even more quickly today than they did in the past. At the same time, anti-blackface critique also circulates more quickly. When people in other countries put on blackface, they are more likely to face immediate international criticism.