As uncertainty swept throughout the country at the start of the COVID-19 pandemic, Mark Richard found some much-needed stability at William & Mary. And in turn, Richard became a valuable addition to the university’s faculty.

The co-creator and executive producer of “The Good Lord Bird,” a seven-part Showtime series adapted from James McBride’s 2013 National Book Award-winning novel, was looking for his next project, and he found just the outlet he needed as W&M’s Class of 1939 Artist in Residence.

“Thank God, because it really helped my head to have something to do that was creative,” Richard said. “I had intended to go back to Los Angeles to do another show, but then Hollywood kind of shuttered. It’s still kind of dark.” 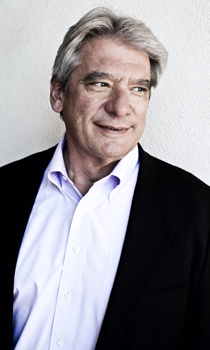 Working remotely from home in Richmond, Richard teaches a twice-weekly screenwriting course via Zoom called From Page to Screen, in which he shares with W&M students the knowledge he has gained through more than 20 years as a writer, producer and showrunner in Hollywood.

The timing of this course allows Richard to experience the fruits of his most recent work with his students.

“The Good Lord Bird” runs every Sunday through Nov. 15. It’s a satirical portrayal of abolitionist John Brown, played by co-creator Ethan Hawke, and his antislavery crusade that led to the raid on Harpers Ferry, Virginia (now West Virginia) in 1859, a seminal moment in the lead up to the Civil War.

“If we can possibly get people to look at the roots of what has happened to this country as far as race, then that’s good, even if it’s a Mark Twain approach to it,” Richard said. “Let’s see how this all happened. Maybe it will stir up some interest that people don’t know about.

“Slavery was America’s great mortal sin, and we’re all human, and I think James McBride’s book transcends the situation with love, meaning that he finds the commonality in all of us, good and bad.”

In addition to teaching students the process of writing a script, Richard has invited guest speakers into the virtual classroom, including Susie Fitzgerald, the executive vice president of original programming at AMC Networks, and Jami O’Brien, the executive producer of the television series “NOS4A2.”

Richard hopes to have McBride and Hawke speak to the class as well.

“James McBride wrote a pretty brilliant book, so I used a lot of his stuff and just sort of spun it for the television adaptation,” Richard said.

Richard co-produced the show with Hawke, with whom he developed a close friendship.

“I like him a lot. He’s such a nice guy,” Richard said. “He’s well read. He’s a novelist in addition to being an actor and producer. He’s a very thoughtful guy, and we get along really well.”

Richard’s upbringing in Franklin, Virginia, has been a source of much of his writing, including his national bestselling memoir, “House of Prayer No. 2” and two award-winning short story collections, “The Ice at the Bottom of the World” and “Charity.”

He started working in television in 1998 as a story editor for “Party of Five,” and he has worked as an executive producer for many shows, including “Fear of the Walking Dead” and “Hell on Wheels.”

Richard has taught writing at universities all over the country, including University of Southern California, University of Mississippi and Texas Tech.

“Mark brings to the W&M community an incredible range of industry knowledge, combined with literary integrity,” said Jon Pineda, assistant professor of English at W&M and a member of the Class of 1939 Artist in Residence selection committee.

“It’s clear from his resume that, in addition to having published numerous books and also having worked on a number of celebrated TV series, Mark is sought after for his talent and for his professionalism. He's a true artist and a generous teacher, and this combination fits perfectly into the W&M community of scholars and teachers.”

Richard’s new venture at William & Mary has been beneficial in that it has given him something to commit to during the pandemic while things in Hollywood continue to be in flux.

“I’m very pleased to be a part of William & Mary, but I’m disappointed that we’re not on campus,” Richard said. “I was looking forward to being around thinking people. It’s always energizing to be around students who are excited about books and film and learning and ideas.”

Without the benefit of in-person instruction, Richard has found other effective ways to get to know his students.

Richard had them write an autobiography at the beginning of the semester. He figured it was a good way to get to know his students, gauge their hopes, fears and past experiences that could come in handy when writing.

He learned a lot about his students and their motivations.

“There were some students who just sort of took for granted their life or their life experiences as being a rich place to mine. Some of my students have had some really interesting experiences that I think they just discounted as a source for potential drama.”