When the Virginia Shakespeare Festival (VSF) kicks off on June 25, William & Mary will have more involvement than just serving as host.

Numerous students, both current and recently graduated, are filling myriad roles, from the box office to backstage to under the proscenium arch. Many of them credit their experience with W&M’s theatre program during the school year with getting them involved with the festival.

“At another summer festival they don’t know you and they may not take a chance on you until you’ve proven yourself,” said Cris Ruthenberg-Marshall ’14, production stage manager for this year’s VSF. “At 22 it’s hard to have proven yourself. Having the personal relationship with the festival during the year allows us to have a foot in the door.”

Brittany Liu ’16 knew about the VSF even before arriving at the university.

“I’m from Ohio and my acting teacher there, when I told her I was looking at William & Mary, said ‘they have a great Shakespeare festival there.’”

A rising junior, Liu made the cast as an acting intern this summer and will play minor roles in both productions as well as serving as understudy for the part of Olivia in Illyria.

Ruthenberg-Marshall appreciates the increased time to focus on a production. During the school year “you’re doing a show, you’ve got classes, you probably have a part-time job. It just kind of piles on. To be able to make the transition to working professionally where this is all that you’re doing is really nice.” 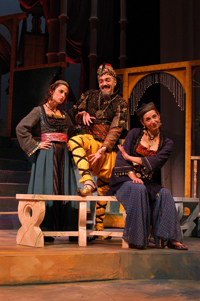 Working in a professional context can be an interesting change of pace for students as well, with more of their attention on the show than they are able to dedicate during the school year.

“With this process every day is completely different, you don’t know what to expect or necessarily what we’re going to be working on the next day,” said Leah Beyer ’14, an acting intern who will be understudying Mariah in Illyria and Portia in Julius Caesar. Her experience at the VSF has been varied, serving as a carpenter last summer before taking to the stage this year.

An additional benefit of this professional experience is the opportunity to work alongside those who have made a living in the theatre. Theatre professionals come from as far as Seattle and Arizona to be a part of the VSF and offer their younger counterparts valuable insight. Mallory Tucker ’15 is the company manager and says that talking to more experienced members of the ensemble has given her ideas about how to stay involved with theatre post-college.

“It’s not until you get a chance to work with [the professionals] that you realize just how many avenues there are,” she said. “Some of my favorite memories at the festival are sitting and having really long conversations with some of our older professionals about their past and trying to understand how they stay involved with theatre while pursuing a different career path.”

While the festival itself is an educational experience, students say that W&M’s theatre program does an excellent job of preparing them to work professionally. Tucker’s role is administrative, as is that of Kelsey Schneider ’14, who manages the box office and social media. She said that her courses at the university enabled her to be successful.

“The department program is extremely comprehensive,” she said. “It doesn’t matter if you want to be an actor, a stage manager; you are required to learn about the technical aspects of theatre, you’re required to spend time in our shop, you have to spend some time backstage, you have to contribute in multiple ways in order to come through this program.”

The VSF will open Wednesday with Illyria, a musical adaptation of Twelfth Night, which runs through July 6, and continue on July 10 with Julius Caesar, which will run until the festival ends on July 20.