As the quiet of winter break continued to envelop much of the William & Mary campus last week, a band of pirates practiced their kick line in the studio theatre of Phi Beta Kappa Hall.

The pirates, members of the Sinfonicron Light Opera Company, are among some 90 students who have spent the month putting together a production of Gilbert and Sullivan’s comic opera “The Pirates of Penzance.” As the students prepare to premiere their cat-like tread and modern major general Thursday, they are also getting ready to celebrate a milestone in the history of the company: its 50th anniversary.

“We’re approaching this entire year of Sinfonicron thinking about where we’ve been, where we are now and where we can go as a company because it’s not every day that a student organization gets to celebrate 50 years of existence,” said Lucy King ’15, publicity manager.

Sinfonicron was formed in 1965 when Phi Mu Alpha Sinfonia and Delta Omicron, men’s and women’s music fraternities, pooled their resources to present “The Mikado.” 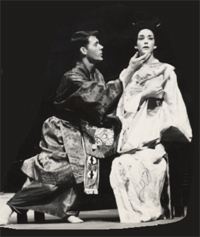 “It will not be the proposed ‘concert version,’ but instead we’ll give it the full theatrical treatment for which it was intended,” William Heins ‘66 wrote in a July 13, 1965, letter to the fraternities. “This is a real challenge, being entirely student organized, directed, and acted. Our aims are three: to present a significant quality musical product; to gain theatrical experience and knowledge; and to enjoy ourselves while pursuing a worthwhile appreciation of the combined musical and theatrical worlds.”

In the same letter, Heins, then-president of Phi Mu Alpha Sinfonia, noted: “from henceforth, we will be known as the Sinfonicron Light Opera Company.”

For five decades, the student-run company has presented a variety of musicals, most of them Gilbert & Sullivan productions, including “H.M.S. Pinafore,” “Ruddigore,” “Yeomen of the Guard,” “Patience,” “Iolanthe,” “The Gondoliers,” “The Sorcerer,” and, of course, “The Pirates of Penzance.”

Today, the company still strives for the same goals that Heins set forth in his original letter: to present a quality production, learn and have fun together. It’s a simple recipe that has kept students from across campus coming back to the company year after year, giving up large portions of their winter break for the sake of Sinfonicron.

This year, the company members arrived on campus Jan. 2 and have worked 12-hour days since, from 9 a.m. to 9 p.m., rehearsing, building sets, designing costumes and doing everything else needed to get the show ready for its Jan. 22 opening night.

“It’s a very exciting process and very atypical as well for a theatre production, but that’s what makes it so special,” said King.

Although they put in a lot of work leading up to opening night, the students also make sure to also have fun together with events like “dessert Olympics” or “Sinfoniween,” the company’s unique take on Halloween, complete with costumes and ice cream.

Students from a variety of disciplines participate in Sinfonicron each year, said King.

“A lot of our cast members and pit members are somehow involved in music on campus, but as far as majors go, we really are all across the board,” she said. “We definitely have representation from the theatre department, but then you also have people that just love to be part of musical theatre and this is a great way to become part of something like that without necessarily having to major in that area.”

And some people, like King, actually find their major by participating in Sinfonicron. Along with playing trombone in the pit orchestra the last few years, King has been part of the publicity team for Sinfonicron – an experience, she said, that “helped me fall in love with marketing.” She is now a marketing major, with a music minor.

It’s not unusual for Sinfonicron to have a significant impact on the students who participate in it. Many of its alumni consider it a highlight of their time at the College, said King.

On Jan. 24, those alumni will have a chance to reunite during a private, golden jubilee 50th anniversary celebration that Sinfonicron is hosting.

“People can see old friends or alumni from 20 years ago can come and meet current members of the company and see how things have changed or stayed the same,” said King. “We’re really looking forward to it. It’s going to be a really fun way to celebrate this milestone.”