Kareem Roustom has been called “musically bilingual,” but that’s a bit of an understatement.

The Syrian-born composer and ethnomusicologist, who moved to the United States as a teenager, has recently composed concert music commissions for artists such as Daniel Barenboim and the West-Eastern Divan Orchestra, the Kronos Quartet and the Philadelphia Orchestra, as well as arrangements for Shakira and several film scores for award-winning independent films. This year, he is bringing those experiences to William & Mary’s Department of Music as one of the Maurine Stuart Dulin Class of 1939 Artists-in-Residence. 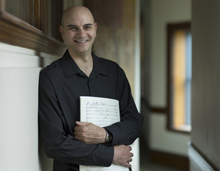 The residency rotates through four departments in Arts & Sciences on an annual basis: English, music, art and art history, and theatre, speech and dance. The Department of Music used the residency this year to invite two artists to campus: Emmy-nominated Roustom and eighth blackbird, a Grammy-award-winning contemporary music sextet. The artists will visit William & Mary several times throughout the academic year to perform and work with students and faculty.

Roustom's first visit to William & Mary came shortly after the West-Eastern Divan Orchestra (WEDO), under the direction of Daniel Barenboim, toured with Roustom's new work "Ramal," taking it to some of the premiere classical music festivals in the world: the Lucerne Festival in Switzerland, the BBC Proms at the Royal Albert Hall in London and the Salzburg Festival in Austria, as well as the Teatro Colon in Buenos Aires where the tour began in August. Barenboim and WEDO commissioned the work.

Roustom began his residency at William & Mary with a weeklong visit to the campus starting Sept. 30. Throughout the week, he worked with students individually and in several classes, including Sophia Serghi’s film composition course and Anne Rasmussen’s American Soundscapes class. He also worked with music ensembles, including the Gallery Players and Women’s Chorus, and attended a screening of “Amreeka,” a film he had scored. On Friday, Roustom joined the Middle Eastern Music Ensemble in a performance for the Reves Center for International Studies’ 25th anniversary celebration.

Although Roustom has held residencies at universities before, he said that this one is different.

“This is really nice because I can come and talk and work with students on a one-on-one basis, which I haven’t had the chance to do before, and also have the chance to talk about film specifically, but I also can come back,” Roustom said. “I have a lot of things to share that will hopefully be of interest. The other residencies were four days, five days or a week, but this allows me to go in depth a lot more, which is also challenging for me.”

Rasmussen, who directs the W&M Middle Eastern Music Ensemble, suggested Rouston as one of the artists-in-residence because of his versatile background, which is allowing him to contribute to the department in multiple ways.

“He’s able to come here, and it’s like an octopus,” she said. “He’s got a tentacle in all of these different little scenes. In some ways, it’s really great for the department because we get to share this one incredibly gregarious, generous, multitalented person and it reminds us that we have things in common.”

For instance, when Roustom returns in February 2015, he’ll assist with a side-by-side concert that is being put on by the Middle Eastern Music Ensemble and the Gallery Players. He may also be involved in the Global Film Festival.

“Some of the things we’re doing are connected, and some we’ve never done before,” said Rasmussen.

Although William & Mary is making the most out of Roustom’s visits, the composer said that he is getting a lot out of the residency, too, including the chance to take a closer look at his work.

“Sometimes, you don’t often have the time to sit down and really take things apart and say, ‘Let’s really, really think about this,’” he said. “I think that’s what a residency offers, just that kind of detailed thoughtfulness that when you’re working on something, you just don’t have time to do. So, it’s a nice opportunity.”

To learn more about Roustom and eighth blackbird and find information on their scheduled appearances at William & Mary, visit the Department of Music website.