Abid Rizvi will be more than a mere spectator at the Dec. 4 launch of NASA’s new Orion spacecraft from Cape Canaveral. Rizvi, a member of William & Mary’s class of 2018, had a hand in building the mission while he was still in high school.

NASA is bringing Rizvi and his fellow members of Team ARES to the Florida facility to watch the lift-off. Team ARES, a student group from the Governors School for Science and Technology in Hampton, was the winner of the Orion Exploration Design Challenge. Rizvi and the team designed a radiation shield to be tested against the barrage of electrically charged ions striking Orion as it passes through the Van Allen Belt.

Orion is NASA’s new spacecraft built to carry humans, designed to allow us to journey to destinations never before visited by humans, including an asteroid and Mars. NASA notes that the Dec. 4 launch will be an uncrewed mission test flight, Exploration Flight Test-1, designed to test systems critical to crew safety. 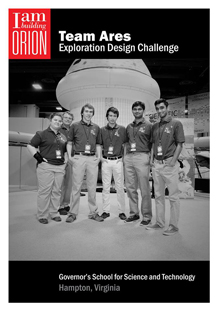 Team ARES’ shield is one of the most important components that will be evaluated on Exploration Flight Test-1. Their shield prototype isn’t much bigger than a softball, but it will serve to test the concept for a much larger version to protect the Orion crew.

“It’s to protect people,” Rizvi said. “The idea of our shield is to keep people safe from radiation.”

The idea to put together a Governor’s School team to enter the Orion Exploration Design Challenge came from Gregory Hajos, a retired NASA scientist who is a volunteer mentor at the school. Rizvi said the NASA specifications were quite specific, calling for a shield that would fit into a seven-inch cube, but Team ARES came up with a slightly smaller product to meet weight.

“We brainstormed and came up with this shield, which fits all of their requirements. Its structure can stand up to a large amount of radiation. It is cost-effective,” he said. “It was the best design out of all our other tries.”

In shape, the shield is a tesseract: Rizvi describes the shape as “almost like a cube inside of a cube.” The NASA specs said that the shield could be constructed of any static, non-toxic material. Team ARES initially intended to create their tesseract out of tantalum, an element that offers superior resistance to radiation. Tantalum looked good, Rizvi said, until the team got a dose of tantalum sticker shock. They had to build two shields and NASA gave each team a budget of $500 per unit.

“Tantalum is amazing at blocking radiation, but it costs like $700 per square inch,” he said. “We figured out that the cost of making two cubes of tantalum—well, you could take that money and buy a Corvette.”

Back at the drawing board, Team ARES decided to use a technique called graded-Z shielding. Rizvi explained that graded-Z shielding is a laminate using common metals—titanium, aluminum, zinc and tin— layered in decreasing atomic number.

“The graded-Z shielding will block more radiation than using a single metal,” he explained.

The team tested their shield design using Oltaris, an web-based tool for radiation assessment in space, a utility used by NASA scientists. A NASA publication notes that the radiation shield design by Team ARES received the highest score in online simulations of radiation exposure, beating out all other entries in the year-long Exploration Design Challenge competition.

The Team ARES radiation shield concept and design was good enough for NASA to build it and install the shield on the Orion spacecraft. NASA will put dosimeters inside and outside of the cube to measure how well the ARES shield works on the uncrewed Orion mission.

A NASA press kit says that during the 4.5-hour flight, Orion will orbit Earth twice, covering more than 60,000 miles and reaching an altitude of 3,600 miles on the second orbit. (The International Space Station orbits Earth at an altitude of approximately 260 miles.)

Rizvi and the rest of Team ARES will arrive in Florida on Dec. 1. NASA has filled the days before the Dec. 4 launch with conferences and press opportunities; Rizvi said the space agency has additional activities scheduled for the days after the launch.

As it’s his first year at William & Mary, Rizvi hasn’t selected a major yet. “But I definitely know my major is going to be in biology, or something in the medical field,” he said.

As of Dec. 1, Orion is scheduled to lift off at 7:05 a.m. Dec. 4 from Cape Canaveral, Florida, weather permitting.