Clad in an incongruous halo, Devil’s Advocate Andreas Stathopoulos narrowly out-argued representatives from the humanities, social sciences, and natural and computational sciences to convince a capacity crowd that none of the disciplines were worth saving.

The computer science professor was the victor in William & Mary’s annual Raft Debate, held in Phi Beta Kappa auditorium for the first time Monday. Overflowing attendance at previous Raft Debates in the Sadler Center’s Commonwealth Auditorium prompted the move, which allowed more students, faculty and staff than ever before to witness one of the College’s more unique traditions.

The premise is simple: Four William & Mary professors from diverse disciplines are stranded on an onstage desert island, conveniently equipped with an escape raft.

But there’s a problem: The raft can only carry one person. To decide who gets off the island, the three castaway professors—representing the humanities, social sciences, and natural and computational sciences—engage in lively debate justifying their discipline as the one most essential to humanity. To complicate matters, a dastardly devil’s advocate argues that none of them are worth saving. A judge oversees the proceedings and declares a winner based on audience applause.

As the event has grown in popularity, so too have the number of students coming out to support their discipline. Several humanities students, eager to regain the energy from Anne Charity Hudley’s sweeping 2012 victory for the humanities, handed out fans made from Palermo’s visage to humanities supporters as they filed into the auditorium. While the academic factions were strong, many attendees switched their allegiances as the debate raged on—many to nihilistic devil’s advocate.

The judge laid out the rules: The professors and the devil’s advocate had seven minutes each to make their case, followed by a round of three minute rebuttals.

By prior agreement, Palermo took first blood. Palermo—clad in coat and ascot—claimed to be costumed as Alistair Cooke, the longtime host of PBS’s Masterpiece Theatre, using the get-up to bemoan the skepticism toward masterpieces prevalent in the other disciplines.

Highlighting a labor dispute handled by Margaret Thatcher—under whose leadership the Raft Debate was reinstated, he noted—Palermo quipped that “rafts have very little to do with mining, but the idea is the same, right? There’s only so much to go around—whether its wages or buoyancy—and we can’t keep you all afloat. That’s economics—the dismal science—all over: finite resources and excess demand.”

Up next to defend his discipline was Hicks, dressed as Bishop Madison, the College’s chair of political economy appointed by Thomas Jefferson in 1779. The costume formed the backdrop to his tongue-in-cheek lampoon of the other disciplines, disguised as praise for their remarkable advances and insight.

“Only my fine colleagues in the humanities could have the imagination to portray the breakdown of society as a zombie apocalypse and the power of the state as a plethora of weapons,” Hicks dryly noted. “This brilliant allegory demonstrates the struggle of societies in the face of chaos.” 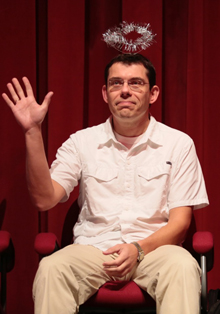 Hicks pointed to another insightful social commentary proving the humanities’ value: “The Kardashians as they struggle to create a meaningful dialogue in the political system.”

Despite Hicks’ zinger about geology’s contribution to the understanding of earthquakes through the science of fracking, Vahle rapidly regained ground on behalf of the hard sciences with a tour de force of scientific demonstrations.

After demonstrating Newton’s laws to the audience with a pneumatic Tribe T-shirt cannon—even landing one in the balcony crowd—Vahle declared that Einstein was responsible for her favorite scientific innovation: the Domino’s Pizza app.

After all, the clocks used in GPS satellites run slower than clocks on earth, so “without correcting for general relativity, the clocks in space would run fast and my pizza would end up on the next island over,” Vahle said.

Luckily, her pizza was right on time. At that moment, physics student Reed Beverstock ’15 careened onto the stage, carrying a pizza box and riding a rocket sled powered by a fire extinguisher.

“The artist only has a painting of a starry night, but the scientist has the real thing,” Vahle said as the stage lights dimmed and a disco ball she produced cast starry lights around the auditorium.

With that tough act to follow, Devil’s Advocate Stathopoulos donned his Google Glass and took the stage to discredit the disciplines.

Emphasizing the interdisciplinary nature of modern academia, Stathopoulos’ argument was simple: If we can’t have all the disciplines, we should have none of them.

“My job here is simply to keep them honest—hence this,” he said, pointing to the halo he wore.

The remainder of his presentation consisted of portraying the disciplines in just such an honest light. Physics, for instance—“Physicists happily justified spending 10 billion dollars for the Large Hadron Collider to help find a particle that everyone knew existed and expected to see,” he said.

Likewise with economics: “Economics is the only field in which two people can share a Nobel Prize for saying opposing things.”

Nor did art remain unscathed: “No discipline can appropriate art—not even art.”

As the notably short rebuttal round began, Palermo resumed the stage and threw ping-pong balls into the crowd to emulate Vahle’s T-shirt cannon. Hicks opted for an unusual tactic: to attack the system rather than his opponents.

“I do want to point a finger at the judge. We have designed a process that favors the strong in society,” he said. “This is not the kind of institution we need going forward.”

He urged the audience to cast their votes using social media, unveiling a special hashtag for the Raft Debate, rather than usual applause-volume method.

But it was Vahle who made the strongest statement: She had a drink delivered to her onstage via quadrocopter.

An audience member in the subsequent question-and-answer session made Vahle’s argument for her by asking, “Can humanities or social science bring me a drink?” After a long pause, the judge said, “I think you got your answer.”

Finally, the all-important vote was taken using the official Raft Debate sound level meter to measure the audience’s applause. Ever the devil’s advocate, Stathopoulos produced his own sound meter to check the results.

Torczon ultimately declared Stathopoulos the victor, condemning the professors to remain shipwrecked. Even so, they did not seem disappointed in the outcome.

“It was way more fun than I thought it would be. It was great,” Palermo said after the contest. “Everybody’s respectful but funny, but we really got some laughs out of it.”

Even alumni in the audience who made a special trip just to view the debate left satisfied.

“This is the one event I make a point to come back for every year,” said Wes Dunnavant ’14, a teacher in Chesterfield County Public Schools.