Two physicists and a biologist were discussing a fruit lying beneath one of William & Mary’s Isaac Newton trees. One of the physicists asked the question: What caused that apple to fall?

“Abscission,” answered Martha Case. She was speaking of the process that caused the tree to sacrifice the young apple, not the force that caused the fruit, once shed, to seek the center of the earth. The lost apple is only one of several that began growing on the Newton tree this spring and which must survive a long, hot, peril-filled summer in order to ripen.

Case, the College Conservator of Botanical Collections, has been keeping a close eye on the university’s Newton trees since they were planted in February of 2014. The two physicists, Marc Sher and Joshua Erlich, were instrumental in obtaining the trees — clones of the very tree that legend says inspired Isaac Newton to formulate his theory of universal gravitation. The trees were planted in front of Small Hall, the capstone of a two-day Newtonfest, which also featured physics demonstrations, learned speakers and a staged reading of a play.

Case counted seven or eight apples starting on the tree, and said that it’s normal for a tree, especially a young specimen, to abscise some fruit early in development. She explained that abscission is an adaptive strategy of fruit trees, which have to balance energy devoted to growth with energy devoted to reproduction — fruiting. 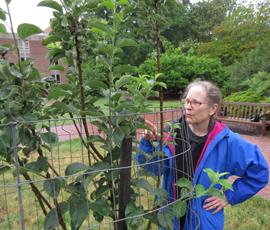 The Newton trees belong to a cultivar known as the Flower of Kent. Like most apple trees, it requires another tree — genetically compatible, but not the same variety — for pollination. The pollinator also has to bloom at the same time. Case had a hard time finding a pollinator match for the Flowers of Kent.

“The problem with the trees is that they’re these old varieties,” she said. “No one grows them much any more, so there’s not a lot of information on their compatibility groups. And the apple trees that I did find were hard to get. That made me look at crabapples.”

She found what she thought would be suitable crabapple cultivar and it was planted near the Small Hall Newton trees. The crab Case picked turned out to be a prodigious bloomer and — most importantly — came into flower at the same time as the Newton trees.

One day in late April, Case walked over to Small Hall to check on the trees. The crabapple was covered with blossoms and also with bees. The Newton trees were blooming too, in their diffident, understated English manner. On an impulse, Case decided to commit a stealthy act of guerilla arboriculture.

“I went over to the crab and snipped a couple of blossoms,” using just her fingernails, she said. She carried the flowers over to the Newton tree and hand-pollinated three or four blossoms, all on the same branch. She said that a couple of students saw what she was up to. Case swore them to secrecy and began keeping an eye on the branch.

“Within a week, a week and half, I could see the ovaries start to swell,” she said. “A botanist could see this, but nobody else knew about it.”

She was interested to see that some of the apples were growing on branches that she had not pollinated, suggesting that the bees clustered around the crabapple had done their job. Case said she can’t be sure if she actually pollinated her branch or if the bees had beat her to it.

“It wasn’t very scientific,” she admits. “But I wasn’t worried about that — I wanted apples.”

Sher has known about the apples for a few weeks. He sent photos of the apples to Newton historian Mordecai Feingold and author and science writer Dava Sobel, both of whom were speakers at the planting festivities. But otherwise he kept mostly mum.

“I’ve learned not to talk about pregnancies until they are public,” he said.

If the Newton tree were an expectant woman, you would say she’s just starting to show. The apples are visible, but at the beginning of Memorial Day weekend the largest fruit was about the size of a small lime.

The Flower of Kent is a late-ripening tree; Case, who also is an associate professor of biology, says that the fruit won’t be ripe until October. In the meantime, there are a number of bad things that could happen to growing apples. To begin with, warm, wet Williamsburg doesn’t offer prime conditions for apples, she said.

“Let’s not get too excited just yet,” she said, beginning to count on her fingers. “We’ve got some hurdles: Apple scab is a disease that’s in the area. We need to think about nutrients. There’s apple fly and lots of things that want to eat our apples. We shouldn’t get our hopes up.”

Despite the hurdles, the young apples may indeed manage to survive the heat of a Williamsburg summer, hungry deer, curious humans and other pests. If even a modest crop is produced, the physicists are unanimous on what should be done with William & Mary’s first Newton apples.

That pie, if it’s ever baked, should be consumed with an equal measure of celebration and gravity. Case said that the apple that inspired Isaac Newton to start thinking about universal gravitation is genetically identical to each of the apples growing on William & Mary’s Newton trees — allowing of course for a few hundred years of random genetic mutation.