It was a long winter in New England for Amanda Murray ’03.

“So to help with the doldrums, I started curating a museum of lost gloves on Instagram,” Murray said. “Some other people have started adding to it recently, which is kind of funny. I try to find delight in the everyday.”

Murray loves museums, a love that started at William & Mary. In Cambridge, Massachusetts, she visits museums all the time, cooks as much as she can, and she’s learning to make wheel-thrown pottery. Recently, Murray found time to produce "The Search for General Tso," a documentary about Chinese food in America, with her film production company, Wicked Delicate Films. “The Search for General Tso” takes the viewer from Shanghai to New York and beyond to uncover the origins of this iconic dish.

Murray transferred to William & Mary from Northwestern University during her sophomore year, without ever seeing the university. But it turned out to be a great decision, with W&M’s unique history and location being a perfect fit for her.

“In some of my courses we used Colonial Williamsburg as a kind of lab for exploring historical interpretation,” she said. “How rare to be a student on such a historic campus, right across the street from this fascinating and kind of bizarre living history museum.”

While at the university, Murray held a job at the Muscarelle Museum of Art, which sparked her interest in being a curator. While working there, she co-founded the Museum and University Student Exchange (MUSE), which promotes student involvement with the museum, and awareness and appreciation of visual arts and museums.

“I think William & Mary has a way of nurturing eclectic interests, and having an interdisciplinary concentration shaped a lot of the ways in which I continue to enjoy the world,” Murray said.

Murray fell into filmmaking unexpectedly. “I’ve long been a movie lover and interested especially in documentaries,” she said. “For awhile after college, some friends and I took turns hosting a cooking and film-viewing club we called Docudinnery. But filmmaking wasn’t a career I ever really considered or prepared for in a deliberate way.”

In 2010 after graduate school, while working as a curator at the Smithsonian’s National Museum of American History, she met Ian Cheney and Curt Ellis of Wicked Delicate Films when they came to the museum to show a documentary. They stayed in touch and several months later, a producing opportunity opened up.

“It’s not easy to take professional risks,” Murray said. “But I wanted to try something new. I had a whole lot to learn in some ways, yet I found some surprising parallels between curatorial museum work and documentary film production.”

As a curator and then as a film producer, Murray found herself doing research and writing, and thinking about things in a lot of the same manner, like how to bring history to life in fresh ways, how content can fit into a certain space or span of time and how to engage the viewer.

Murray was able to dive into a number of projects at once with Wicked Delicate. She traveled to Qatar while producing a film about sustainability and green building projects; she produced a film in Michigan profiling a modernist architect; and she was able to direct her own film, “World Fair,” a short documentary that highlights personal stories and archival film footage around the 1939 New York World’s Fair. “I first studied America’s world’s fairs in a class at W&M, and they’ve remained a fascination of mine.” 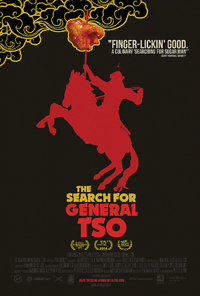 Film production can mean a lot of different things, depending on the company and the kinds of projects you’re taking on. For Murray, with a small company, production means she has done everything from research and writing, mapping out possible film storylines and conducting interviews, to running film shoots, writing grant proposals and planning screenings — a variety that she loves.

Murray likes to work on films that focus on human experiences, and her new project, "The Search for General Tso," allowed her to do just that. In 2004, Cheney of Wicked Delicate was on his way to Iowa for a project. On the road in rural Ohio, he stopped in a Chinese restaurant and ordered General Tso’s chicken. A simple question became the basis for a film: Who is General Tso and why are we eating his chicken? How did so many Chinese restaurants pop up across the country? When Jennifer 8. Lee’s book The Fortune Cookie Chronicles came out a few years later, Wicked Delicate reached out about collaborating.

“Ultimately we wanted the film to bridge education and entertainment, seriousness and levity,” Murray said. “The film is grounded in cultural history, but it’s also meant to be accessible and appealing to broad audiences.”

"The Search for General Tso," described as a “finger-lickin’ good documentary” by Variety, is as much about food as it is a tale of Chinese Americans’ search to find their identity in a new country. The film team interviewed a number of scholars, historians and authors, but also sought out Chinese restaurant owners in small towns to capture their immigrant experiences.

“General Tso’s chicken is a humorous lens onto a larger and deeper story,” Murray said. “I hope viewers take away a greater understanding of the challenges that Chinese-American immigrants have faced and continue to face, and an appreciation for the ways that food can be a platform for cultural exchange and inclusion.”

The Search for General Tso was in theaters and is available on video on demand. Go to www.thesearchforgeneraltso.com for more information.