Psychologists have traditionally looked to the mind to help people living with mental health issues. But a recent study led by William & Mary researchers shows that the stomach may also play a key role, suggesting that the old adage "you are what you eat" is more than a cliché.

W&M Psychology Professors Matthew Hilimire and Catherine Forestell recently joined with University of Maryland School of Social Work Assistant Professor Jordan DeVylder to investigate a possible connection between fermented foods, which contain probiotics, and social anxiety. The researchers' gut feeling was right when they found that young adults who eat more fermented foods have fewer social anxiety symptoms, with the effect being greatest among those at genetic risk for social anxiety disorder as measured by neuroticism. The journal Psychiatry Research accepted the study in April for publication in August.

"It is likely that the probiotics in the fermented foods are favorably changing the environment in the gut, and changes in the gut in turn influence social anxiety," said Hilimire, assistant professor of psychology. "I think that it is absolutely fascinating that the microorganisms in your gut can influence your mind." 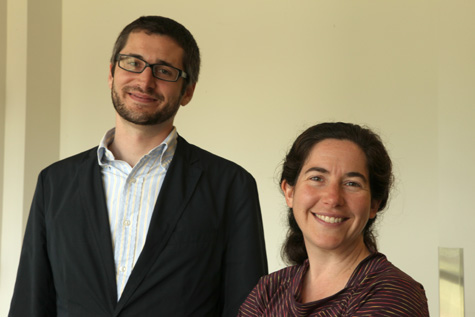 "These studies with animal models showed that if you give them certain kinds of bacteria, which we call probiotics – the beneficial microorganisms that help our health, like lactobacilli – these animals tend to be less depressed or less anxious," Hilimire said.

Based on those findings, researchers have been able to look at the different mechanisms at play, including decreased gut permeability and inflammation and increased GABA, a neurotransmitter that’s mimicked by anti-anxiety medications like benzodiazepines.

"Giving these animals these probiotics increased GABA, so it's almost like giving them these drugs but it's their own bodies producing GABA," he said. "So your own body is increasing this neurotransmitter that reduces anxiety."

In addition to the animal studies, a few human trials have been conducted, wherein researchers have isolated probiotics and given them to people, resulting in a reduction of depression and anxiety symptoms. However, no studies had looked specifically at social anxiety.

"Given that background, we were interested in doing a naturalistic study," said Hilimire. "So, we didn't actually give people probiotics, we just asked them in their day-to-day life how much fermented foods they were eating."

The researchers designed a questionnaire to be included in a mass testing tool administered in the university's Introduction to Psychology courses.

The tool includes the Big Five Personality Inventory (neuroticism being one of the five) and the Social Phobia and Anxiety Inventory. People with social anxiety, also known as social phobia, experience anxiety symptoms such as a racing heart and sweaty palms in social situations, said Hilimire.

"Neuroticism is more of a stable personality trait, so it should tap into the underlying way that you interact with the world," said Hilimire. "And so it's a continuum where one end is emotional stability and the other end is neuroticism."

Since the mass testing tool already included ways to measure social anxiety and neuroticism, the researchers added a questionnaire about eating habits, asking the students about their consumption of fermented foods over the previous 30 days, foods such as yogurt, kefir, fermented soy milk, miso soup, sauerkraut, some dark chocolates, microalgae juices, pickles, tempeh and kimchi. The questionnaire also asked about exercise frequency and the average consumption of fruits and vegetables so that the researchers could control for healthy habits outside of fermented food intake, said Hilimire.

About 700 students in three Introduction to Psychology sections during the fall 2014 semester responded to the questionnaire.

"The main finding was that individuals who had consumed more fermented foods had reduced social anxiety but that was qualified by an interaction by neuroticism. What that means is that that relationship was strongest amongst people that were high in neuroticism," Hilimire said.

"The people that benefitted the most from fermented foods were high in neuroticism. And the secondary finding was that more exercise was related to reduced social anxiety, as well."

Although the researchers were pleased – and a little surprised – to see the findings so clearly support their hypothesis, the study is just the first in a series they have planned to continue exploring the mind-gut connection, including another examination of the data to see whether a correlation exists between fermented food intake and autism symptoms, said Hilimire.

The researchers will also soon create an experimental version of the study, looking specifically at social anxiety and using fermented foods as opposed to probiotic supplements, which lack the bioactive proteins that can also affect the brain.

"If we use a naturally fermented food – we give people yogurt instead of isolated probiotics – it will be among the first experimental studies that use these fermented foods, so they’ll get the benefits of the probiotics but also the peptides, as well," said Hilimire.

Without that experimental phase, the researches can’t make a causative connection between eating fermented foods and reduced social anxiety.

"However, if we rely on the animal models that have come before us and the human experimental work that has come before us in other anxiety and depression studies, it does seem that there is a causative mechanism," said Hilimire.

"Assuming similar findings in the experimental follow-up, what it would suggest is that you could augment more traditional therapies (like medications, psychotherapy or a combination of the two) with fermented foods – dietary changes – and exercise, as well."

As long as a person is healthy enough to exercise, there shouldn’t be any negative consequences of those supplements, Hilimire added.

"So, a young, healthy person should be able to take these without any negative consequences, which can’t be said for things like benzodiazepines, which can be addictive and have potential for overdose."

The mind-gut connection is still a relatively new concept in the field of psychology. Many of the people currently doing the work are microbiologists or people trained in naturopathic medicine, but studies like this one may be on the forefront of changing conventional wisdom on the topic.

"I think there is some skepticism that there can be such a profound influence, but the data is quite substantial now," said Hilimire. "I think people would be accepting if they looked at the data, but the connection between the mind and gut is not something you typically think about as a psychologist."