The second annual Boswell Symposium at William & Mary will focus on the issues and experiences of lesbian, gay, bisexual, transgender, queer/questioning and asexual (LGBTQA) youth. 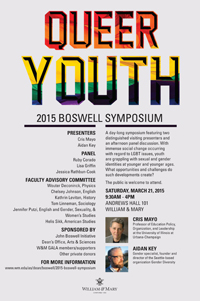 The event, scheduled for March 21 in Andrews 101, will feature two keynote addresses, a panel discussion and a research poster presentation by students.

"We're excited for the second annual Boswell Symposium,” said Associate Professor of Sociology Thomas Linneman. “For the first, we covered the topic of same-sex marriage in Virginia, and we all know how that turned out.  Even though there has been progress on that front, it's critical to keep in mind that lesbian, gay, bisexual and transgender youth still face considerable issues. We hope this symposium will shed light on them."

The symposium, titled “Queer Youth,” is free and open to the public, but attendees are asked to RSVP by emailing Linneman in order to receive a free, boxed lunch.

The symposium will begin with a welcome address at 9:30 a.m. followed by the first keynote address of the day, "Desiring Association: Gender, Race, and Sexuality Politics among LGBTQA Youth,” by Cris Mayo, professor of education policy, organization and leadership at the University of Illinois at Urbana-Champaign.

Aidan Key, gender specialist, founder and director of the Seattle-based organization Gender Diversity, will give the second address at 11:15 a.m., focusing on "Transgender Children in Society: The Difference a Day Makes."

The symposium will also include a panel discussion at 2 p.m. with Ruby Corado, director and founder of Casa Ruby in Washington, D.C.; Lisa Griffin, Richmond-based clinical psychologist and founder of the Charlotte Transgender Healthcare Group; and Jessica Rathbun-Cook, youth programs director for  the Richmond Organization for Sexual Minority Youth. A reception at 4 p.m. will close the day’s events.

Along with the symposium, the Boswell Initiative is also sponsoring a one-credit course this semester, taught by Linneman, in which students are reading pieces on LGBTQA youth written by Mayo, Key and others. The students are also participating in a small, original research project that will be presented in poster form at the symposium.

According to its website, the Boswell Initiative “aims to promote innovative, interdisciplinary scholarship on the cultural, economic, political, and policy dimensions of lesbian, gay, bisexual, and transgender life in the United States and in other countries.” Established by the Arts & Sciences Dean’s Office and William & Mary Gay and Lesbian Alumni Association in 2013, the initiative grew out of the John Boswell Lecture Series, which has been sponsoring lectures during Homecoming weekend since 1997.

The initiative is named for W&M alumnus John Boswell ’69, who passed away in 1994. After receiving a doctorate in history from Harvard, Boswell went on to become a professor at Yale and was acclaimed for his teaching as well as his scholarship on medieval history and the history of sexuality.

“The Dean's Office is delighted to support the Boswell Initiative,” said Lu Ann Homza, dean for educational policy and professor of history. “In his academic career, John Boswell was a pivotal contributor to the study of LGBTQA history. I think he would be pleased with the initiative, which reaches out to the broader community as well as every member of the William & Mary campus.”

Funding for the 2015 Boswell Initiative is provided by the Arts & Sciences Dean's Office, members and supporters of GALA, and other private donors.