Joan Gavaler, professor of dance at William & Mary, has spent the last year on research leave, bringing Aura Curiatlas Physical Theatre to life. On May 9, the company, which includes William & Mary alumni, will have its Williamsburg premiere at 7 p.m. in the Kimball Theatre. In anticipation of that event, W&M News recently asked Gavaler a few questions about the company and its upcoming performance.

What is Aura Curiatlas Physical Theatre?

Aura Curiatlas is innovating a new approach to performance by combining acrobatics, dance and theatre into highly skilled physical storytelling that is accessible to people of all ages and backgrounds. The content of our work is inspired by everyday situations explored in unusual ways. Aura Curiatlas has been compared to Pilobolus in terms of movement vocabulary, however we specifically focus on the use of stories that our audiences can connect to. We take on quirky and relatable characters such as bus passengers dealing with uncomfortable seats or crayons that are left in the box. Our acrobatics and dance appear through the actions these characters take to solve their problems.

How did Aura Curiatlas come to be?

In August 2013, I asked Dan Plehal '09 (an acrobat, theatre artist and W&M theatre alumnus) if he would make a piece with me for DANCEVENT (October 2013), which became Newton’s Cradle. We realized our way of working together is creatively invigorating and challenging, so we formed Aura Curiatlas and started working with two other performers (including another alumna, Jane Rabinovitz '13) that January. In August 2014 we premiered at Links Hall, Chicago.

How did the company get its name?

That name! We spent quite a bit of time creating a name that would capture the concepts we felt were central to what we do. So Aura and Atlas as the Greek representations of wind/lightness and earth/strength capture the full range of qualities that we use, especially with our partnering. And Curi refers to curiosity, curiousness. The characters in our stories seek to discover something even as we as artists seek to discover each story in the process of creating our work.

What is physical theatre and how does it differ from dance?

Physical theatre means that we’re using movement to tell stories. Our work differs from dance because we are rigorous about choosing movement that reflects the emotional logic of a situation, not simply because it’s exciting or beautiful.

Who else from the William & Mary community has been involved in the creation and operation of the company?

Dan and I do the direct work required to create repertory, produce performances, and run the business side of things.  And Jane has been one of the collaborators with us from the beginning. But in many ways, W&M has been our “incubator.” The Department of Theatre, Speech, and Dance started offering coursework in physical theatre in 2007, and I began periodically making physical theatre pieces for DANCEVENT beginning in 2008. When we rehearse in Williamsburg, we work in Adair Hall and some of our company’s work has premiered as part of DANCEVENT. We’ve gotten advice on grant writing and marketing from colleagues at the College, and, of course, the professional development funds I’ve received for faculty research have been extremely helpful.

When did the company begin performing, and where have performances been held?

Our premiere performance was in August 2014 at Links Hall, Chicago. As a preview, we held open rehearsals in Williamsburg and Chicago in July and August. Aura Curiatlas then performed at a private event for a large company in D.C. (September), Clarion Theatre, New York City (February), Atlas Performing Arts Center, D.C. (March), and Hooper Academy, Hope Hull, Alabama (April). We happily return to our roots to perform at the Kimball Theatre, Colonial Williamsburg, on May 9, 2015. In our second year, we plan to return to these cities as well as pursue venues in Philadelphia, Boston, Johnstown, Pennsylvania, and Lexington, Virginia.

What are you looking forward to about the upcoming Williamsburg performance? 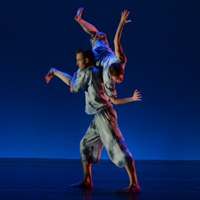 The pieces are well-rehearsed and ready to go! I’m proud of what we’ve done in the past year and am looking forward to sharing it all. And we have so many friends, family, colleagues, students and alumni planning to come, that I’m starting to get a bit more nervous than I’ve been about our other performances. We always invite audience members to stay after the performance to talk with us and share their thoughts about what they saw and also their suggestions for pieces for future shows. I always enjoy those conversations.

When will you return to W&M, and how do you think this experience will affect your teaching?

We plan to make a performance at Kimball an annual event, so look for the whole company to come back next May. Dan was a guest artist with our physical theatre and dance students last spring, and I hope we can bring him back to do more teaching next year as well.

My approach to teaching helped shape the philosophy of Aura Curiatlas by emphasizing the collaborative process as a means to make new work. And now my time working with the company is affecting my teaching by reminding me that we can flourish when we take risks in a safe environment.

What kind of reception have you received so far?

We have received a great deal of positive feedback about our work:

Kristin Guerin, Director & Associate Producer of New Year, New York wrote, “It was an honor to watch your innovative and creative work as invited guest artists in World Oceans Production of New Year, New York on Saturday February 21 at the Clarion Theater … In every performance piece, your investment and attention to detail allowed the audience to believe fully in the imaginary circumstances of the scenes.  And I was also inspired by your talk-back discussion with the audience following the show. I was very grateful to study with such innovative artists, if only for just a few minutes. Thank you for sharing your work with us!”

Roell Schmidt, Director of Links Hall (a center for progressive performing arts) wrote, “We feel really privileged to have been your launchpad … the four of you are such outstanding performers, we are all very very excited to follow your progress and hope you will come back and share your artistry at Links again.”

Laura Durham, Casting Associate, Chicago Shakespeare Theatre wrote, “I saw over 120 shows last year in Chicago, and Aura Curiatlas was in my Top 10 Favorites of 2014. This is an awesome physical-based theater company that uses dance and acrobatics to create concise pieces that are funny, touching, and evocative.”

Brian Simerson, principle dancer and choreographer with Momix came to DANCEVENT 2013 and wrote afterward, “Newton’s Cradle by Joan Gavaler and Dan Plehal is exquisite! As two separate dancers they are awesome, but once they join forces … they are otherworldly.  They defy gravity and move with such a sense of abandonment; however, never losing the precise control it takes to properly cantilever their duality. Only from true harmony can this kind of partnership exist, compel, and succeed.”