Maj. George M. “Chip” Autry V ’02 had been back home in New Jersey for just a few months after a deployment in Kuwait, but when asked to serve again, he didn’t hesitate.

An Army reserve officer, Autry had returned to his civilian job as a supply chain director with pharmaceutical company GlaxoSmithKline (GSK). His background in military logistics and his experience with handling health care products made him an ideal candidate for the vital mission known as Operation Warp Speed: planning delivery of 300 million vaccines to protect against the pandemic that’s been raging across the nation and world this year.

When Autry arrived at his new assignment in Washington, D.C., in early November, he was surprised to find himself working shoulder-to-shoulder with another William & Mary alumnus. Maj. Lance Barlowe ’06, an active duty soldier, had been managing large equipment as a materiel integrator for the Army Sustainment Command at Rock Island Arsenal in Illinois for two months before volunteering to serve with Operation Warp Speed. 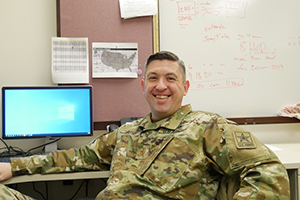 “I thought it was a great opportunity and a really important mission,” Barlowe says. “I’m glad to be a part of it.”

Autry and Barlowe grew up in Virginia — in Lynchburg and Richmond, respectively — and both majored in government at William & Mary. They are scheduled to work on Operation Warp Speed through the end of March.

“That we both ended up in the planning shop of the most important military mission in the world today really testifies to the caliber of W&M grads,” Autry says.

Since first appearing in China last December, COVID-19 has caused more than 299,000 deaths in the United States and over 1.6 million worldwide as of Dec. 14. Throughout that time, drug companies, research institutions and government agencies have raced to develop, test and manufacture a vaccine.

When the Food and Drug Administration granted emergency use authorization on Dec. 11 for the first coronavirus vaccine — the one produced by Pfizer Inc. and BioNTech — Operation Warp Speed’s distribution plans sprang into action. An FDA advisory committee will meet Dec. 17 to consider authorization for a second vaccine, produced by Moderna Inc. in partnership with the National Institutes of Health.

Until now, Autry and Barlowe had been conducting “tabletop exercises” — coordinating responsibilities, rehearsing operations and finalizing destinations for shipments equitably across 64 jurisdictions that include U.S. states, territories and major metropolitan areas. They’re part of a team of about 100 military service members and civilians working out of the U.S. Department of Health and Human Services headquarters and partnering with companies such as FedEx, UPS and McKesson and federal agencies including the Department of Veterans Affairs on the vaccine distribution. 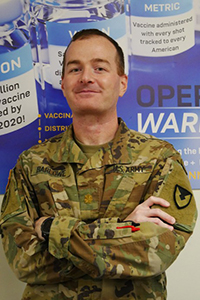 “We’ve been preparing so that the day after we got the approval, we were ready to start shipping products,” Autry says.

Operation Warp Speed spokeswoman Lisa Simunaci says vaccine production was under way as the authorization process moved forward and that 40 million vaccines are expected to be ready by the end of December.

“Right now, boxes are being packed and loaded with vaccine,” he said. “Within the next 24 hours, they will begin moving vaccine from the Pfizer manufacturing facility to the UPS and FedEx hubs.” Perna said 636 locations nationwide would receive the vaccine from Dec. 14-16. The first priority for people to receive vaccines are health care workers and residents and staff at long-term care facilities.

For Autry, the toughest part of his current assignment is spending more time way from his wife, W&M alumna Kerry Rafferty Autry ’02, and their three children, ages 7 to 15.

“It’s hard to have him gone most weeks, but the kids have been champs,” says Kerry Autry, who double-majored in American studies and religious studies at William & Mary. “We’re grateful for him to be able to contribute in this meaningful way.”

A school nurse who is pursuing graduate studies at Georgetown University toward becoming a midwife and nurse practitioner, Kerry made her own contribution to fighting COVID-19 by volunteering in a drive-through COVID-19 testing effort for three months last spring.

Chip Autry’s recent deployment to Kuwait followed four others in Iraq and Kuwait — including one stint as an advisor to the Iraqi army — during his nearly 10 years as an active duty soldier. As part of the ROTC program at William & Mary, he had planned on a military career, but his prospects changed dramatically during his senior year, after the terrorist attacks on Sept. 11, 2001.

“That was definitely a sobering moment,” he says. “Prior to 9/11, my expectations around the military were that it would involve a lot of training, and maybe I’d do a tour of duty in Kosovo or somewhere like that. After Sept. 11 happened, it was clear things were going to heat up. I was at Fort Benning in Georgia doing a field exercise as a young lieutenant when I found out we had invaded Iraq.”

Autry, who later earned an MBA at New York University’s Leonard N. Stern School of Business, says the highlight of his active-duty career was his time as a company commander, providing security for convoys pulling equipment out of Iraq.

“I took 160 soldiers to Kuwait for a full year in 2010, when we were doing a big draw-down out of Iraq. I had 50 gun trucks and crews that man those trucks. Taking 160 soldiers down range and bringing them all back was a phenomenal event,” he says.

Barlowe says he became interested in military service after 9/11, when he was a senior in high school. He started the ROTC program at William & Mary, but chose not to continue with it — a decision he later regretted. After graduating, he worked at a large banking company for six months and then joined the Army.

Being a company commander is also a career highlight for Barlowe, who has been deployed twice to Afghanistan and spent two years in Korea as a transportation and logistics officer. During his time in the Army, he earned a master of professional studies degree in supply chain management from Penn State University.

“I spent some time at Fort Lee, just south of Richmond, instructing new lieutenants who had just joined the Army in a transportation basic officer leadership course,” Barlowe says. “I was doing that right next door to the Military Entrance Processing Station where I joined the Army several years before. Almost coming full circle in that regard was a really neat experience.”

For Autry and Barlowe, gaining informed perspectives while at William & Mary on political systems and how governments operate provided a strong foundation for their military and civilian careers, including their current work with Operation Warp Speed. As their mission shifted from the planning phase to implementation, they reflected on how things might play out during the next few months.

“My hope is that we get multiple vaccines approved quickly, that we’re able to get them out quickly to the American people, and that the American people are willing to take the vaccine,” Autry says. “Unless we all start taking the vaccine, I don’t see any other way of getting on the other side of this pandemic.”

Adds Barlowe, “At the end of the day, I hope we have a safe, effective vaccine that’s available to everyone, and that everyone is able to get back to pre-COVID conditions. That would be ideal.”