Trying to make students more aware of refugees in the local community, Anne Rasmussen continues to find ways to connect the two.

Rasmussen, professor of music and director of the Middle Eastern Music Ensemble at William & Mary, started a couple of years ago with an idea. Her latest effort will be the ensemble’s benefit concert for local refugee resettlement efforts on April 21 at the Kimball Theatre.

The event Refugees Welcome: Music for a Better World will feature the ensemble performing with guest artist Imad Al Taha, a violinist and refugee from Iraq, whom Rasmussen met years ago while conducting research in Dubai. Danis Sugiyanto, a Fulbright artist and teacher from Indonesia in residence this semester at W&M and the University of Richmond, performing with Richmond-based musicians of Raga Kusuma and Rumput will be the opener.

Rasmussen had always admired colleagues who worked with at-risk populations and organized various sessions involving her activist colleagues during her time as president of the Society for Ethnomusicology. In addition to her research abroad, she made it a goal during her 2016-17 sabbatical year to reach out to local refugee resettlement offices.

“As an ethnomusicologist, I try to bring attention to communities that might be foreign to our students and faculty,” Rasmussen said. “And particularly, since I work in the Islamicate world among Muslim populations and also in the Arab world and in diasporic communities in the U.S., I have something to offer students in both academic and music performance classes. Although there are always positive stories, this is part of the world that’s sensationalized, and people are naturally curious about it.” 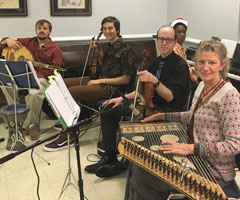 She forged a connection with Suheir Diyab, supervisor of the Commonwealth Catholic Charities Hampton Roads Refugee Resettlement office and herself a refugee from Iraq. Since then, Rasmussen has arranged for members of the ensemble to play at the organization’s holiday parties in 2016 and 2017 and for a tour of the W&M campus where young refugees from Afghanistan, Iraq, Syria, Kenya and the Congo were paired with students, as well as for the upcoming benefit concert.

Last fall, students in Rasmussen’s freshman seminar class American Soundscapes: Music, Migration and Resettlement, taught as part of the Sharpe Community Scholars program, listened to Diyab speak in class and later in the semester hosted a campus visit for refugee youth. To share some of their favorite music, W&M students created a Spotify playlist of their favorite and most representative songs.

“It was a lot of fun,” said Mary Hanrahan ’21, who participated. “The guy I was paired up with, I’m still in contact with him. We have each other’s Snapchat and stuff like that. And it was just a lot of fun walking around.”

Students and visitors listened to one another’s music on their cell phones and exchanged contact information to stay in touch. The visitors particularly enjoyed listening to the ensemble perform Middle Eastern music that day, during lunch at the Reves Center, Hanrahan said.

She has experience with immigrants because in the summers she works as a cherry picker in northern Wisconsin, and most of her coworkers are originally from Mexico, she said. Her family in Richmond also hosted Nepalese neighbors for dinner frequently enough for her to become familiar with their stories.

The day of the Sharpe Scholars tour, she decided on the topic for the class’s final project of a podcast focusing on a case study.

“Mine was specifically on immigrants and their music and how the music changes — how tastes change when they come to America,” Hanrahan said. 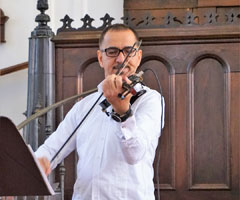 Ari Weinberg, a graduate student in American studies and member of the ensemble, played in the ensemble’s 2017 holiday concert for refugees and will play and sing, as well as perform a vocal solo, in the upcoming concert. She is working on publicity for the show as part of her interest in connecting the campus community to the local community, including refugees who may need support.

Getting across a sense of global citizenship for undergraduates is one goal, while the other is making students aware that while they are learning about international topics there are people all around them who have experienced those things, she added.

“By interacting in these ways, we’re challenging ourselves to work against the kinds of biases that we have been brought up with or what’s said to us in the news or online,” Weinberg said.

Music and other aspects of culture like food are ways that difference can be celebrated and acknowledged, with people less afraid of asking questions and getting to know each other, she said.

“Coming to our concert and just hearing the music and meeting refugees and people from the refugee resettlement center is just, beyond the money we’re raising, is so important,” Weinberg said. “There’s a lot of violence in the world and tensions and fear. And what better way to challenge yourself to move beyond what we’re being told all the time and figure out for yourself that these are real human beings you’re talking to who have gone through stuff to get here.”

“People wanted to volunteer, donate and see how they could help,” Diyab said. “And they all heard about us from working with Anne and her group. … Refugees need help and guidance to acclimate to totally different systems here; Anne is so helpful and supportive, connecting people with people.”