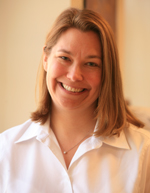 Paleontologist Rowan Lockwood received the 2009 Thomas Jefferson Teaching Award, the highest award given to young faculty members at the College of William and Mary.

Lockwood, an associate professor in the Department of Geology, characterizes her classroom manner as “loud, enthusiastic, and somewhat obnoxious.” In the courses she teaches, which range from large introductory courses to smaller, upper-level seminars, she’s apt to be found gesticulating wildly, walking up and down the lecture hall aisles to catch students’ attention, and coaxing students into actively participating.

“As an undergraduate, I sat through far too many lectures that were passive. The professor stood at the front and read through his or her notes,” she said. “I try to be much more enthusiastic and interactive with students, even in large intro classes. I want to get them up, asking and answering questions, volunteering for demos and actively discussing the issues that we’re tackling that day.”

For example, her intro classes flip pennies to demonstrate radiometric decay, critique the “science” behind blockbuster disaster movies, and learn to predict the weather. Students in her Age of Dinosaurs class conduct debates on whether Tyrannosaurus rex was a predator or a scavenger and create life-size hands-on museum exhibits on dinosaurs. Her students in her freshman seminar on extinction find themselves writing National Geographic-style articles on extinction and touring behind the scenes at the captive breeding center of the National Zoo. She makes a point to know the names of as many students as possible, even in 100-person intro courses.

“The students respond so positively to learning their names that it automatically makes a large classroom seem smaller,” Lockwood said. “I think it makes participating in class much less intimidating.”

Lockwood’s students, in turn, describe her using phrases such as “incredibly conscientious, completely accessible and contagiously passionate.” Her dedication and enthusiasm has served her discipline as well as it has served the College; many geology majors found their academic calling in a Lockwood section of an introductory course such as GEO 110: Earth’s Environmental Systems or her 16-student freshman seminar, titled Extinction is Forever, a combination of paleontology and conservation biology.

“The majority of students who major in geology at William & Mary entered the college intending to major in other fields,” Lockwood said, “and they fell in love with geology in an intro class, on a field trip or through a freshman seminar. Our department works hard to promote a tight-knit community. The majority of faculty and majors are on a first-name basis. Every course involves field trip opportunities.”

Some intro students underestimate the rigor of geology: “A handful of students enroll in my intro class, expecting it to be ‘rocks for jocks,’ then panic ensues after the first exam. I try to emphasize on the first day of class that all of our intro courses are courses for majors. Besides, geology is much, much, much more than rocks.”

Lockwood’s research specialty, paleontology, is the study of prehistoric life through fossils. She studies mass extinctions and climate change and how they affect the evolutionary history of marine animals. Her research ranges from the end-Cretaceous extinction (the one that killed off the dinosaurs) and its effects on marine ecosystems to using the fossil record of the Chesapeake Bay to establish baselines for ecological restoration.

She not only teaches an upper-level course in the subject—cross-listed in biology as well as geology—but also regularly incorporates geology majors into her research, often giving them projects of their own. Her students regularly are selected to give presentations at academic society meetings and many are co-authors of papers published in peer-reviewed journals. She points out that the involvement of undergraduates in presentation- or publication-grade research is standard operating procedure in her department.

“When I joined her lab as a timid sophomore, she gave me a very structured project and checked on me often,” wrote Sarah Kolbe ’06 in a letter supporting Lockwood’s nomination. “I am currently studying brachiopod morphometrics in Denmark on a Fulbright Scholarship, and my experiences with Dr. Lockwood were crucial both to getting here and to preparing me for my research here.”