An interdisciplinary team of William & Mary students have brought home one of the biggest prizes in synthetic biology, an honor that has been called the World Cup of Science.

The eight-member team won the Grand Prize in the Undergraduate Division at the iGEM Grand Jamboree held Sept. 24-28 in Boston. More than 250 teams from five continents entered the competition, and William & Mary’s was the only North American entry among the finals. 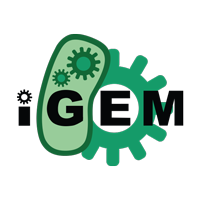 “To be clear about the magnitude of what they have achieved: They came out on top of 259 teams of some of the most dynamic and hard-working students in the world,” wrote Markus Gershater, one of the judges of the competition. “A relatively small team, they saw off competition even from incredibly well resourced teams like Heidelberg, who field large teams (>20 team members) with a great amount of support and resources. In the end, the elegant work the William & Mary team carried out, which could be a small but fundamental piece of how future synthetic biology is carried out, won through.”

Taylor Reveley, president of William & Mary, congratulated the iGEM team on its victory.

“This is spectacular,” said Reveley. “The triumph of our iGEM team is the stuff of legend.  It reflects the extraordinary research taking place at William & Mary these days, and it makes clear the amazing degree to which our undergraduates have a strong hand in it.”

An actual contribution to science

Like all the other competitors, the team began with a starter kit of biological components and were charged with creating a unique biological engineering project. Jacob Beal, another of the iGEM judges, acknowledged that the William & Mary project made an actual contribution to science.

“To do safe and reliable biological engineering, we need predictably behaving cells,” he tweeted. “W&M iGEM is helping measure predictability.”

The winning team worked on their project throughout the summer under the mentorship of Chancellor Professor of Biology Margaret Saha and William Buchser, visiting assistant professor of biology.

The project was titled “Measurement of Promoter-Based Transcriptional Noise for Application in Gene Network Design.” The basic idea is to characterize the amount of variability in gene expression, the process of converting information stored in DNA to functional products in the cell.

"No biological process occurs in the exact same fashion each and every time it takes place. The question is how much does it differ," Halleran said.

The variation in the transcription of genetic information is known as stochasticity, or noise. Biological processes can't be expected to be perfectly precise, but reliable engineering requires that the degree of precision they do have be quantified. Understanding transcriptional noise is a vital aspect of bioengineering and synthetic biology offers a number of tools to do so.

Discussion in the days immediately following the Grand Jamboree suggested some reasons that made the William & Mary project stand out to the judges. Halleran said that the choice of project was one aspect that set William & Mary apart from other teams.

Not flashy … but it was important

Indeed, many of the iGEM cognoscenti seemed to prefer the William & Mary concept of a good-science-done-well project to one that might have been more glitzy, but made less of a real impact.

“It wasn’t a flashy project, but it was an important project,” Golino explained. “One of my favorite things that happened is that another school tweeted at us and said, ‘Wow. William & Mary’s presentation was the most modest and thorough that we’ve seen.’ I think that says it all: We let the project speak for itself.”

Gershater, chief scientific officer at the British bioengineering firm Synthace, explained the William & Mary project laid important groundwork in the measurement, characterization and quantification of some biomolecular parts. Such basic understanding of biological components is necessary before scientists can begin the useful and beneficial reprogramming of biological systems, he said.

“The William & Mary team carried out a very elegant, well thought through characterisation of a fundamental class of genetic parts, measuring the basic variability of those parts' outputs (the noise inherent in their function),” Gershater wrote in an email from London. “This was a piece of work that will likely be one of the foundation stones of how iGEM teams characterise and use these parts in future, leading to much more robust and reliable biological designs.”

In addition to the Grand Prize, the team also won honors for Best Measurement Project, Best Education and Public Engagement and Best Presentation.

Halleran, Marken and Vij were charged with presenting the project on stage. They explained that they needed repeated rehearsals to get their presentation within the 20-minute conference limit, eventually getting to a consistent 19 minutes and 30 seconds. Halleran said they were surprised when they were told on Monday that their presentation had been judged one of the top three and that they would be required to give the presentation again. In front of 3,000 to 4,000 people. With all 150 iGEM judges present. In about 20 minutes.

The presentation trio retired to a freight elevator for some intense woodshedding before taking the stage again, this time to clinch the award. Halleran said that he believed that the William & Mary presentation had two strengths. The first, he said, was making the content accessible to a general audience. The second strength was demonstrating the interrelationship of the biological and mathematical aspects of their project.

“A lot of the talks seem disjointed; they talk about ‘this biological thing’ and ‘this mathematical thing’ and it’s not right — the two work together,” Halleran said. “I think we did a really good job of showing why we needed the math, what the math allowed us to do and what that allowed us to interpret biologically.”

All this science, plus a K-12 synthetic biology curriculum

“Communication with the public is an integral part of iGEM,” Cryan said, and so teams are encouraged to find ways to make synthetic biology understandable to the public.

“Given that synthetic biology is a new science, much of the public is fearful about its potential consequences,” Vij noted, explaining that a proper understanding of the field won’t allow irrational and unreasonable fears to grow. 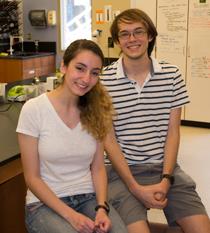 Their curriculum is already drawing interest from K-12 educators. It impressed the iGEM judges, as well.

The multidisciplinary makeup of the team prompted William & Mary to pursue what Golino described as a “very biomath-y” project.

“When you’re working with an extraordinarily diverse group of people, all working on the same problem, but coming from such different backgrounds, you get so many different approaches,” Golino said. “I spent a lot of time just making sure things are running smoothly — project design, experiment design. John’s a math major, and he spent a significant amount of time working on the modeling aspect of our project.”

The team credits the mathematical modeling aspect, headed by Marken, as being instrumental in the success of the project. “It was a really unique aspect of the project,” Saha said. “And it really meshes with our William & Mary way of looking at things from an interdisciplinary perspective.”

Saha said the interdisciplinary makeup of the team mirrors the increasing trend in biology to incorporate other disciplines in research. “A lot of biologists think this is all about biology,” she said. “It isn’t.”

Research that wins such an award requires long hours spent in the lab. Seven members of the team worked full time on the project over the summer. An eighth member joined the iGEM team in the afternoon, after working all day in a chemistry lab. “Full-time,” Saha said, began at 40 hours a week, with plenty of gusts up to 60 or 70.

Most of the team members have experience working on research in the laboratories of William & Mary scientists, but Halleran and Golino say that the student-driven nature distinguishes iGEM from faculty-directed research projects.

“We come up with an idea for a project. We decide how to implement it. Of course, we get guidance from Dr. Saha, but really we decide our own fate,” Golino said. “We’re steering this boat. All our successes and failures, they’re our own. So it’s a very different experience from being given a project and told ‘try and figure this out.’”

Each of the 280 teams in the iGEM competition received an identical starter kit. It’s impossible to avoid comparing the concept to a box of toy building blocks.

“Legos are a very common analogy, and they use it themselves at iGEM,” Golino said. 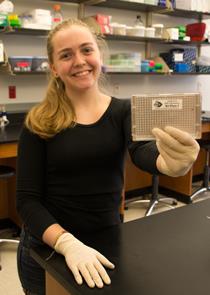 “Each individual part is called a BioBrick,” Halleran added. “The idea is that you take your BioBricks and piece them together and build a bigger structure. The building and engineering metaphor is right there.”

Many of the individual BioBricks are genes or other DNA sequences that have specific functions and so bioengineers have assigned them functional names, such as promoters, reporters, ribosomal binding sites, etc.

They added that each year the starter kit grows in size, incorporating particularly useful products of previous iGEM competitions as new BioBricks. This year’s starter kit included five lab plates. Each plate has 384 wells; each well holds a different part — or BioBrick. Other components bring the number of BioBricks in the starter kit up to around 2,000.

Once the collection of BioBricks is in hand, the students sit down and figure out what they want to make with their collection of biological Legos. The degree of student involvement makes iGEM different from other lab experiences.

“iGEM wants this project to be student-driven,” Saha explained. “The goal of the team advisor is to have as little input as possible.”

The project received financial support from a number of offices at the university. Even though the project was conceived and executed by the students, the iGEM team drew on Saha, Buchser and other William & Mary faculty for logistical and technical support as well as mentoring, advice and encouragement. Other members of the Department of Biology who contributed were Eric Bradley, Mark Forsyth, Oliver Kerscher and Beverly Sher as did Douglas Young of the Department of Chemistry. Greg Smith and Leah Shaw of the university’s Department of Applied Science gave input on mathematical modeling.

iGEM — the International Genetically Engineered Machine (iGEM) Foundation — began in January 2003 as an independent study course at the Massachusetts Institute of Technology, where students developed biological devices to make cells blink. iGEM has since spun off from MIT, hosting the iGEM competition each summer, which has grown from five teams in 2004 to more than 250 teams from more than 30 countries this year.

“It would be great if iGEM served as a paradigm for all undergraduate teaching labs,” Saha said.