In the summer of 1973, Alexander Sawchuck, a professor the University of Southern California Signal and Image Processing Institute, was laying the groundwork for what would become the digital image formats JPEG and MPEG.

He and his assistants were preparing a paper for an upcoming research conference and frantically looking for a new image to process. Legend has it, just at that moment, a colleague walked in with the November 1972 issue of Playboy. He tore a strip from the top of the centerfold and fed it into Sawchuck’s scanner. The resulting head and shoulders scan of Playboy model Lenna Soderberg became the computer industry’s standard for digital image processing.

“People ask me why there are so few women in computer science,” said Evgenia Smirni, S. P. Chockley Professor of Computer Science at William & Mary. “It has to do with a culture that exists around certain programmers -- I call them ‘brogrammers.’ There is a tenor and attitude, which is very hard to counteract. It’s been a boy’s club for a long time, but we are working to change that.” 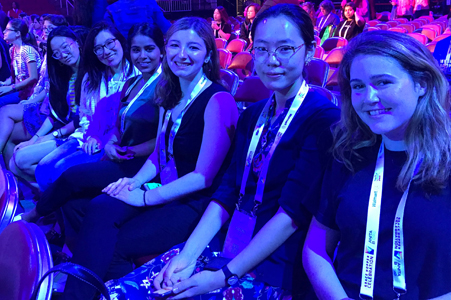 Since joining William & Mary’s faculty in 1997, Smirni has been part of a coordinated effort to increase female enrollment in computer science. Today, women earn just 22 percent of computer science degrees, a number that has remained stagnant for the past decade.

At William & Mary, there has been a different story. Women are earning computer science degrees at rates well above the national average. In fact, the university’s percentage of female CS master’s graduates was double the national average last year. During the university’s 2017-2018 academic year, a third of all computer science degrees went to women. Half of all graduating CS minors were women.

“We have spent years trying to do things that are mindful and intentional to support women, to encourage them to come into computer science and stay,” said Virginia Torczon, Chancellor Professor of Computer Science and the department’s first female chair. “I want to stress that our male colleagues are totally supportive of this. They understand it’s important to have more women in this field and that we, as a department, should be doing this – and it’s working.”

A large part of the effort has centered around finding female mentors for young students. For the past seven years, the department has sent a group of students to the annual Grace Hopper conference for women technologists. Grace Hopper was a rear admiral in the United States Navy. In 1944, she programmed the computer that helped design atomic bombs. Torczon and Smirni attended the first Grace Hopper conference in 1994, along with roughly 200 other women. Today, attendance has surged to nearly 20,000.

“It’s become a huge event, because it really has had an impact on the young women who attend,” Torczon said. “For women to see that they’re not alone, that there are other women in computing who love what they do, that’s important.”

It was at this year’s Grace Hopper conference that Aparna Nagaraj ’19 learned about the story of Lenna Soderberg. Emily Chang, a technology journalist, gave a lecture on her book Brotopia: Breaking Up the Boys' Club of Silicon Valley. Nagaraj immediately picked up a copy after hearing Chang speak.

“It’s a topic I was acutely interested in, because I’m preparing to enter the workforce,” Nagaraj said. “There are all kinds of things that happen when there are no women in the room. This has consistently been a problem in the tech industry, but it’s been accepted, because we are the minority.”

Nagaraj interned in the technology division of a venture capital company over the summer. She said she experienced a rude awakening about the gender gap even before the internship started.

“I was looking through a Facebook group for all the summer interns,” Nagaraj said. “There were about 250 people in the group and only 20 or 30 were girls. Here at William & Mary, I’ve never been in a situation where there were so few women. It was an interesting revelation as to what is actually going on.”

Things haven’t always been so bad. In the mid 1980s, when the Macintosh computer and Microsoft’s MS-DOS were first released, women were earning almost 40 percent of computer science degrees. Then something shifted. While the total number of computer science graduates was steadily increasing throughout late 1990s (peaking in 2004 and again in 2016), the percentage of women earning CS degrees leveled off. 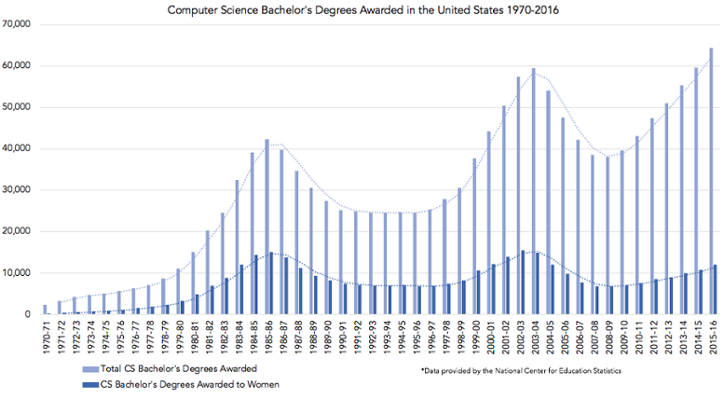 By 2014, the discipline had reached a 10-year low for women, who earned just 17.7 percent of computer science bachelor’s degrees. The rate has hovered around 18 percent since then. According to the National Science Foundation, of all the science and engineering bachelor’s degrees awarded in the U.S. between 2008 and 2014, computer science consistently had the lowest percentage of women.

“There is a cultural aspect to overcome here,” said Smirni. “I remember when I was a graduate student in the early 90s, there was a talking Barbie who would say ‘math is hard.’ Women have never been included in the popular image of what a computer scientist looks like, so we are up against society as well.”

Another hurdle to overcome, Smirni says, is a widespread retention problem. A report recently released by the Computing Research Association shows that women are leaving the field before even entering the workforce. The report states the trend reflects “a leaky pipeline,” where women are dropping out at a higher rate than men as they advance in their education.

According to the National Center for Education Statistics, 33.8 percent of students earning a master’s degree in computer science in 2001 were female. Fifteen years later, it was 30.8 percent. Over the same period, the percentage of CS doctoral degrees awarded to women increased by 2.4 percent, while the total number of doctoral degrees awarded increased by 158 percent.

Smirni, who served as the department’s graduate director for 11 years, says female retention was a key priority in her role. Last year, half of William & Mary’s computer science graduate students were women.

“What we are doing clearly works,” she said. “These women students are empowered. It makes them confident, so they can go out into the workforce feeling secure in themselves. That is important for them, but it’s also important for the future of the field.”

As Nagaraj prepares to graduate, she is already part of the solution. Nagaraj now serves as president of the Society of Women in Computing, a William & Mary chapter of the national Association for Computing Machinery. She is actively working to recruit women into the profession. Like Torczon and Smirni, she believes the future of the field starts in the classroom today.

“It’s going to happen one woman at time,” Nagaraj said. “We get one woman interested and we make sure she feels supported and then we find another woman and get her interested. We teach them to how advocate for themselves and give them the skills to move forward. That’s how we become the generation of change.”