Some visitors to tribeHacks stepped out of Small Hall onto the William & Mary campus on Sunday to enjoy a bit of sun before the presentations got under way. They saw four students, carrying a pair of quadcopters, making their way toward the door.

“Looks like we better go in,” one of the visitors said.

Jose Acuna, one of the drone-laden students, whirled around. 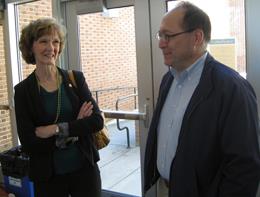 He was as good as his word. Acuna ’17 was a member of team Drone Goals, which hacked a drone to follow a target autonomously. The team, which also included Mackenzie Morrow Foster ’17, Nick Rance ’17 and Shennie Yao ’17, was among those that demonstrated progress to an audience of fellow hackers and a group of judges that included Karen R. Jackson, secretary of technology of the Commonwealth of Virginia.

Jackson is no newb — she’s attended hackathons before and she notes that the Commonwealth hosts its own event, called a “datathon” in deference to concerns about data security among the uninitiated. A William & Mary alumna (M.B.A. ’91), Jackson said events like tribeHacks provide valuable experience in collaborative problem-solving.

“This is the real-world experience that employers are looking for, the hands-on experiences that prepare them for moving directly into the job market,” Jackson said. “The last thing an employer wants is to have to spend another six, eight, twelve months training someone to get up to speed to do the job that they were hired for. It’s phenomenal to be able to do real-world problem solving — that’s what they’re going to do when they get out of school and this is a great way for them to get comfortable with that. They learn how to work in teams — and have a little fun along the way.”

The event was entirely organized by undergraduate members of William & Mary’s chapter of the Association of Computing Machinery. The organizing committee was headed up by Ulises Giacoman ’16 and included Nathan Owen ’17, Divya Bathey ’16, Alexina Haefner ’19, Eryn Sawyer ’17, Jacob Lisi ’16 and Will Theuer ’17.

Hackathons are marathon events; tribeHacks went 32 hours straight from 6 p.m. April 1 to noon on April 3. Participants typically sign in, hear a word from the sponsors, form teams and then begin to create. Food was delivered (in mass quantities) to the Small Hall lobby. There are scheduled breaks in the forms of seminars and other experiences. This year’s tribeHacks was held in Small Hall, in part to take advantage of the makerspace for hardware hacks. 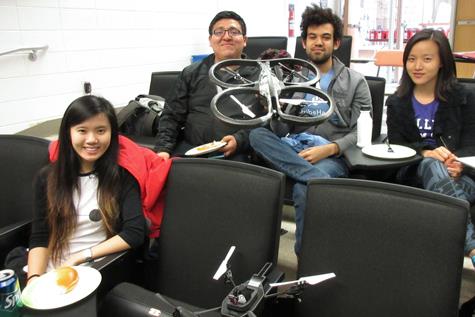 James Deverick is a computer science instructor who also serves as faculty advisor to the student chapter of the ACM. He was an active participant in tribeHacks, teaching seminars and helping with on-site logistics. (“I got four hours of sleep,” he confided on the final day.) Deverick stressed that he was a worker bee and that the conceptualization and organization of the event were all down to Giacoman and his committee.

“We — the faculty — had nothing to do with setting this up,” he said, gesturing at the hackspots set up beyond an array of sponsors’ tables in a Small Hall corridor. “It was all the students.”

Michael Lewis, chair of William & Mary’s Department of Computer Science, spoke about all the work done by the student organizers. They raised $17,500 in sponsor support, allowing for the event to provide food, cash prizes for top hacks and even travel reimbursements for out-of-town hackers.

“Not only that,” Lewis said, “but they bought drones and researched all the regulations governing drones. A lot of logistics.”

The event drew 300 registrants and, typical for a hackathon, about half that number showed up. On Sunday, Owen and Giacoman announced that 19 projects were submitted for judging. In addition to Jackson, judges came from Adobe, STR Software, Dominion Enterprises and the William & Mary faculty. Criteria were technical difficulty, impressiveness, usefulness/practicality and business potential. All submitted hacks, including prize winners, were posted on the tribeHacks Devpost page.