David Soller ’76 is the keeper of what is possibly the world’s largest digital glove compartment.

Soller is the chief of the National Geologic Map Database Project at the U.S. Geological Survey (USGS). He was one of the conveners of Digital Mapping Techniques ’11 held at William & Mary’s Sadler Center, the most recent in a set of annual workshops for makers and users of maps.

Soller explained that two of the basic goals of map-makers—user-friendliness and standardization—haven’t changed much since the 19th century.

“The idea of making maps more understandable go back to John Wesley Powell, who said you must make a map that’s clearly understandable to the layperson, or you’re not doing an effective job of communicating,” he said.

Today’s cartographers and geographers have a wealth of resources at their disposal, giving them mapping abilities undreamed of by Powell, the explorer best known for making the first passage down the Grand Canyon. 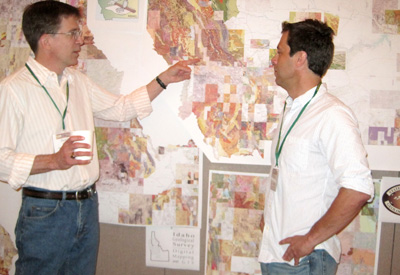 Take point clouds for instance. Chuck Bailey, professor of geology at William & Mary—and the host convener of DMT ’11—says that the use of point clouds is one of the hot topics in modern cartography. Point clouds, he explained, provide enriched data that can make maps more detailed, especially in the third dimension.

“There are so many different ways to map things—land surface, building surface, forest height surface,” Bailey said. Point clouds, he explained, assemble data collected by satellite, airplane or on the ground and can be incorporated into a map that gives the user an accurate picture of the height and depth of features in the area.

“On a map of campus, for instance, you can see that the Sunken Garden is absolutely flat, the height of a blade of grass. But William & Mary Hall sticks out,” he said. “You get a sense of how high the trees are and where there are gaps in the canopy in the College Woods.”

He cited the work being done using point clouds by his fellow William & Mary geologist Greg Hancock in collaboration with Stuart Hamilton, director of the College’s Center for Geospatial Analysis. They are using point cloud data to improve the model of water runoff from farmlands in the Chesapeake Bay watershed.

Point clouds and other 21st century advances increase a mapmaker’s tools as well as the potential to include more and more data. Soller says cartographers need to heed Powell’s wisdom and keep the user in mind. Adroit use of metadata can make a map more versatile: He explains that a geologist, for instance, needs an enormous amount of detail in a map.

“The geologist wants to put all his observations—and all his interpretations—on a map,” he said. “The public is interested in not just science, but in answers. A layperson wants to see, for example, the conditions around their house—physical risks or interesting things like fossil deposits or parks locations.”

“What you can do now is you can put all that scientific information into a database behind the map,” he said. “There’s a database that a scientist or an engineer might use, but in front there’s a pictoral representation of the data.”

Bailey points out that the public benefits from enhancements to maps they likely never would see. He mentioned the example of maps incorporating LIDAR laser imagery in areas of concern about coastal hazards, such as sea level rise, and hurricane inundation.

“The hazard maps that are coming out now are an order of magnitude better than they were five years ago,” he said. “Places like the city of Norfolk are going to benefit from things like this because we now can turn out maps that can be used for zoning and planning that are much more savvy and helpful than they used to be.”