Those toads hopping jauntily around Williamsburg in their snazzy little backpacks are a work of science, not sorcery.

And it’s a work in progress: William & Mary scientists are monitoring specimens of two pond-breeding toad species — the American toad (Anaxyrus americanus) and Fowler’s toad (Anaxyrus fowleri).  They’re going out by day and by night to locate the toads. They have found that, like humans, toads have individual preferences for where they like to hang out.

Associate Professor of Biology Matthias Leu is trying to gain insight into the post-breeding habitat and habits of toads. He and a team of undergraduate researchers have fitted a few dozen local toads with high-tech backpacks to track their post-breeding movements. 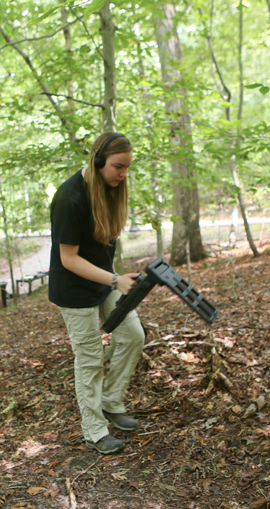 Olivia Windorf  ’19 and Courtney Check ’ 19 are the project’s head toad trackers. Check usually goes out toading in the daylight, while Windorf takes the hoot-owl shift. Quite often the two go out together, sometimes assisted by Millan Khadka ’19.

Technology to track an individual toad is pretty new and Leu notes that the team’s tracking hardware is based on devices invented for skiers, so that the snowed-under can be located quickly by search teams in case of an avalanche.

“A lot of the reason that this kind of work hasn’t been done yet with amphibians is because they’re very small,” Check explained. “If you want to follow them anywhere, you can’t use GPS tags because they’re heavy.’

The toad-tracking equipment uses transponders, a smaller, slightly different version of what’s inside the EZPass affixed to car windshields. Check said their transponders differ from the EZPass in that they use RFID protocol that doesn’t require batteries, allowing a smaller, lighter device that a toad can tote without inconvenience. The toads are fitted with little backpacks — if you saw one on a human, you might call it a fanny pack. The backpacks hold the transponder.

“It’s basically just a diode attached to an antenna,” Check said, adding that the researcher carries a device on toad-tracking treks that they call, simply, “the machine. ”

“The machine sends out a radar signal, and the transponder sends it back as an acoustic signal,” she explained.

“So now we can follow them as they’re leaving their breeding areas,” Leu added. “Where do they go? What sort of habitat do they use? Where do they winter?”

He said the transponder diode weighs less than a gram, not enough to hamper a toad’s movement. The drawback of the battery-less technology is that the signal is distance-limited. Toad hunters must get within 10 to 15 meters of the toad to pick up the signal. Toads will be toads, and sometimes toads go underground, which cuts down on the signal strength some more.

The team is monitoring toads at three sites around Williamsburg. They are looking at the toads of Lake Matoaka and at sites in the Greensprings and Warhill areas.

Adult toads are terrestrial creatures, heading to the water only for a week or so and only to breed. After joining in an act of copulation known as amplexus, they lay eggs in the water, and then disperse into the surrounding terrain, leaving their offspring to get through aquatic egghood and tadpoledom as best they can.

“We gather a bunch of them right at the breeding season, then we start to lose them, ” Leu said, adding that some toads take off beyond the range of their detection equipment. “They’re just gone! Then we have to replace that individual with another one.”

Predators take a significant bite out of the sample as well and the team members have more than once followed a strong signal to a recently fed garter snake. So they have to catch another toad and get out another backpack and transponder.

Those replacements are necessary to keep the population being monitored at around 30 to 40 individuals across the three sites. The team is learning a lot about toad behavior from the specimens that stay in range and manage to avoid predators.

And some toads like footpaths, at least at night. “They’ll just sit on the path,” Windorf said.

Windorf and Check have found that toads live their own lives in the woods. They don’t seem to congregate unless they’re headed for the spawn pond. The trackers have observed some species-oriented preferences. American toads like leaf litter, while the Fowler’s toads are more inclined to burrow or go into logs.

Beyond those rough divisions, though, the team has found a huge variation in post-spawn behavior. One toad is happy to spend most of the day in the same burrow, day after day. A second may move around from two or three favorite spots, while a third toad may wander a great distance during the night. A great distance for a toad, that is.

“We had one that we tagged near a field, then we had a hard time finding him,” Windorf said. “He had left that area and went over a hundred meters into the woods. That was the difference between the night and the day; we tagged him at night and the next day he was in a burrow in the woods.”

Toads will burrow up to a meter underground in winter, Check said, but during the warm months, toads only go an inch or two under the earth. Leu recalled one specimen last year that went underground at the end of July and stayed in the burrow until April. Other members of the same species stayed active until December. The burrower moved around a little bit, but stayed in his lair.

Leu explained that an understanding of toad life is important because amphibian populations are declining worldwide, and most conservation efforts are focused on the spawning ponds. The toad trackers will continue the project into the future, but Leu says it’s become clear that the quantity and quality of the surrounding forest habitat is an important factor in maintaining toad populations.

“The pond is important for reproduction,” he said. “But with no forest around it, the pond does not matter anymore.”

Toad tracking for science involves taking a lot of data. In addition to noting GPS locations, the team records a slate of numbers regarding soil, moisture levels, breast-height diameter of nearby trees and more. The scientific method does leave some room for sentiment, but Windorf and Check are wary about becoming attached to any particular specimen.

“Courtney and I have, like, a curse,” Windorf said. “The second we say we like a toad, it disappears.”

“Or gets eaten,” Check added. “We had one a few weeks ago that was doing really interesting movements. She was giving us really cool data and she was really personable. Then we found her the next day and she was dead with her guts stringing out.”

“We had named her Phoebe,” Windorf admitted.