Deep breaths are the simplest foundation of any meditation or yoga practice. But, what happens neurologically when you inhale through the nose and exhale through the mouth is a bit more complex.

Kottick’s latest contribution to the study, which recently won the $2,500 William & Mary Interdisciplinary Award for Excellence in Research, has helped pinpoint exactly which cells, among a vast sea of them in the brain, are responsible for stimulating the motor neurons that make breathing possible. His research could potentially open the door for improved treatments for respiratory disorders like central sleep apnea. He’ll be honored at a luncheon at the Graduate Research Symposium on March 19.

“We already knew that the general area involved in rhythm generation is in the medulla, but that’s not enough if you want to treat a respiratory disorder,” said Kottick. “You have to be able to specifically identify which cells are responsible.” 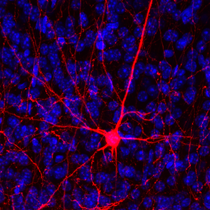 Unlike other parts of the brain, the medulla contains a complicated array of neurons involved in a host of basic physiological functions. “When you open up a part of the brain like the cerebellum, you can typically identify a group of cells with the same function because they might be larger or a different shape from others around them,” said Kottick. “In the medulla, you can’t go in and say this cell does this and this one does that. They all look the same.”

This makes it difficult to correct respiratory problems invasively without affecting other areas. Current treatments for disorders such as sleep apnea involve solving the problem from the outside with a breathing mask (CPAP) worn snugly over the face at night. But pinpointing the breathing gene, Kottick said, could pave the way for more advanced treatments.

“If you can identify the genetic origin of the cells that control the muscles involved in respiration then you can create synthetic viruses that will go in and selectively modify and treat these cells,” said Kottick.

Expounding off of research conducted by his colleagues and predecessors, Kottick hypothesized that a gene called Dbx1, which is known to express excitatory markers involved in breathing activity, is responsible for regulating the neural network that generates the breathing rhythm. Cells that express the Dbx1 gene are found with abundance inside the Pre-Bötzinger Complex, an area of the brain inside the medulla that is known to be the respiratory control center.

To test his theory, Kottick created a brain-like environment in a dish containing Dbx1 neurons laced with light-activated triggers designed to both increase and decrease cellular activity. Then, he used lasers to selectively stimulate and silence the neurons. He and his colleagues found that, when the neurons were stimulated, breathing activity increased; when they were suppressed, breathing activity stopped. 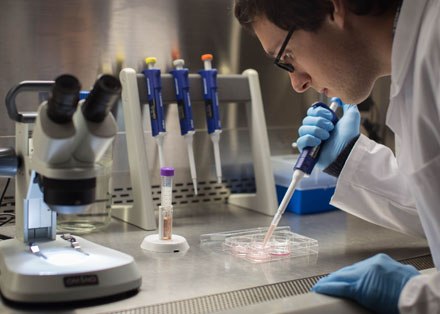 “This project was over a year in the making, so it was unexpected when it actually worked,” said Kottick. “It was relatively new technology when we started using it.”

Kottick hopes the evidence from his research will inspire drug companies to expand upon his findings, leading to new therapies for treating disorders like central sleep apnea. He also notes the importance to the neuroscience field in general.

“A lot of what we did is transferable among areas of neuroscience,” he said. “Someone studying a different behavior might want to use this technique to identify, stimulate, or suppress a different cell type to see if it controls the behavior they’re interested in. It’s a way to advance research and hopefully treatment in areas beyond respiration.”