Listening to Ellen Stofan talk to a room full of geologists is like being in on a brainstorming session for a new science fiction movie.

Stofan, a 1983 graduate of William & Mary, is NASA’s chief scientist. She was on campus at her alma mater during the week before Charter Day and scheduled some time for a presentation to the university's Department of Geology, where she got her start. 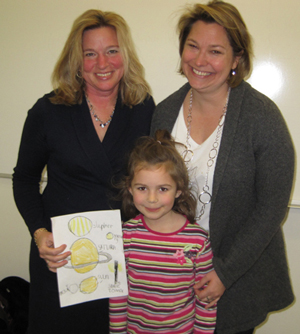 Faculty and students packed McGlothlin-Street Hall 219 for the Feb. 6 talk, massed standing in the back of the classroom and sitting on the floor. Stofan, whose specialty is planetary geology, told the audience of geologists that she had gutted parts of her standard NASA-science presentation to pack in as much geology as possible.

She did present an overview of NASA’s various scientific responsibilities that range from the study of the physics of the sun to missions conducted aboard the International Space Station (ISS). Stofan reminded the group that NASA’s missions to resupply the ISS launch from Wallop’s Island on Virginia’s Eastern Shore.

“Many of those launches are actually visible from campus,” she added. “We’re really ramping up our use of the International Space Station. In two months, we’re sending up our first rodent lab to do all kinds of cool genetics research.”

She explained that NASA’s science mission boils down to addressing three basic questions: Are we alone? How did we get here? How does our universe work? Scientists at the space agency tend to address aspects of the questions within disciplinary and departmental confines, known in NASA as “swim lanes,” she said.

“My job as chief scientist is to get people out of their swim lanes, to look across the scope of the science we do at NASA and try to find connections,” Stofan explained.

NASA offers a wide variety of opportunities for young scientists, but it’s probable that many of the William & Mary geology majors left the talk feeling that now is an excellent time to follow Stofan’s own interest in planetary geology. The reason is simple: today there are so many more known planets to study. Stofan outlined the explosion in newly discovered celestial real estate.

“Back when I was here at William & Mary, we had nine planets,” she said. “That was before we went down to eight.”

In those days, before the demotion of Pluto from planet to trans-Neptunian object, there was only one solar system upon which to base a model, and Stofan said geologists had developed “this whole canonical model” of how solar systems were formed. The canon held that small, rocky planets such as Mercury, Venus, Earth and Mars were formed closest to the sun, while gas giants like Jupiter and Saturn developed in remoter orbits.

“As time went on and we started to develop the technology to detect planets around other stars, we started to find more and more solar systems that didn’t fit,” she said. “So we had to junk that model and now we have a more complex model that says you can form gas giants very close to stars; they can migrate outward.”

Stofan said that the past two years have seen an explosion in planet discovery, due in large part to discoveries made through the use of the Kepler Space Telescope. Kepler and other technological advances have caused the number of known planets to mushroom in a very short time. Stofan explained that the total of known planetary bodies rocketed from dozens to hundreds and on, with the current tally standing at around 3,500—many of which have earth-like attributes.

“We now have hundreds of candidates of earth-sized planets that we can study in more detail, and some of them are actually in places where you could send a spacecraft there using the propulsion technology that we now have—if you have a hundred or two hundred years,” she said.

“It’s gonna be wild,” Stofan told the geologists. “Just wait: Around 2020, everything is going to change.”

During the Q&A session following her talk, Joel Levine, research professor in William & Mary’s Department of Applied Science and a NASA veteran, asked Stofan’s for a geologist’s take on the mysterious appearance of a Martian rock near the Opportunity rover. Stofan outlined several theories and flatly rejected that the mystery rock was a fungus, as alleged in a lawsuit accusing NASA of covering up the discovery of life on Mars.

NASA’s chief scientist also had some less-optimistic news on the science front. It was delivered in the middle of her talk and presented without emphasis, almost off-handedly.

“I have to tell you, four to five billion years from now we are going to collide with Andromeda,” she said, “in a violent collision that could even potentially eject planets out of our solar system. Don’t be frightened and don’t lose sleep at night, but it’s going to happen to us.”

Before the Andromeda-wrought end is upon us, there is a bit of time left to study the universe and take a closer look at our neighbors in our own solar system. Stofan said that when a human is sent to the surface of Mars, she hopes that NASA will select a certain kind of human.

“I have this bias that it’s going to take one of us on the surface of Mars one day, cracking a rock to actually figure out if life evolved on Mars,” she told the current students in her old department. “It’s gonna take a field geologist; everybody knows that, right? You want to solve a problem, you send a field geologist.”