The stuff we call “dirt” or “soil” or “earth” on Earth is known as “regolith” on the moon and Mars, but dust is dust wherever you go.

Dust was a problem on the Apollo moon missions. The introduction to a new book on planetary dust recounts the “major surprise” of the mess lunar dust made of spacesuits and other equipment, especially after the astronauts stirred it up during moonwalks and other external actions. A new book quotes Apollo 17’s Gene Cernan on the subject.

Joel Levine, a research professor in William & Mary’s Department of Applied Science and a long-time NASA scientist, was among those who saw that Mars is much, much dustier than the moon. 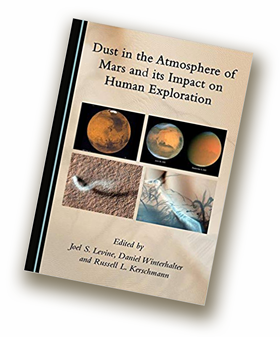 Levine convened a panel of about 100 scientists in 2017 to discuss dust on Mars — the problems and the potential solutions. The workshop discussions generated a book, Dust in the Atmosphere of Mars and Its Impact on Human Exploration, edited by Levine, along with Daniel Winterhalter and Russell L. Kershman.

Levine said the workshops and the subsequent book were prompted by the progress of plans for human expeditions to Mars. There are many scientific challenges that must be addressed before people begin colonizing the Red Planet, and dust may be one of the most intractable.

“Water, oxygen and food are an Earth-to-Mars mass transport problem and can be solved with a powerful cargo rocket,” Levine said. He went on to describe longer-term solutions, such as the development of In-Situ Resource Utilization (ISRU) technology to produce oxygen from carbon dioxide, the major constituent of the Martian atmosphere.

Also, frozen water is available several inches below the surface of Mars.  Food for Martian colonists will come from hydroponic farms. That leaves radiation and dust — both of which will require advanced technological solutions.

We have plenty of dust here on Earth and Levine, a 41-year veteran of NASA, says scientists have learned a lot from terrestrial dust storms. But Mars dust differs in many ways than what we have here at home.

In the first place, most Mars dust comes from a single source called the Mesusae Fossae. The dust is pulverized regolith and is nearly 45 percent silicon dioxide by weight. (The next highest ingredient is ferric oxide, which is the basis for the nickname “Red Planet.”)

The surface of Mars is pretty windy. Levine points out that horizontal and vertical winds create a well-blended, homogenous dust. The interplay of Martian winds, lower gravity and other forces make for conditions in which some of the smaller dust particles can remain suspended in the atmosphere almost indefinitely.

The 2016 workshops were divided into three panels. The first panel examined the structure, composition and chemistry of Martian dust. The findings, detailed in the book, note that we don’t have any firm knowledge about the existence of life on Mars.

“It is especially important to know if there are microbes present in the globally circulating dust for the purposes of planetary protection for a returned human mission,” the report notes. “It is inevitable that this material will interact with humans and systems on Mars and some will be returned to Earth by the return mission.”

The Panel 1 report references the book and movie The Andromeda Strain, a Michael Crichton work about the outbreak of a deadly extraterrestrial microbe, then goes on to recommend several methods of sampling Mars dust, such as incorporating tiny lab-on-a-chip devices on all future unmanned missions.

Panel 2 dealt with the likely impact of Martian dust on human health, while Panel 3 looked at the effect the particles might have on instruments. Both panels noted the paucity of information on the makeup of regolith dust, suggesting that future Mars missions be geared up to fill in the knowledge blanks.

The report concludes with an agreement among the assembled mission planners, scientists, medical doctors and others that dust on Mars needs to be addressed well before manned spacecraft land on the dusty planet.

“In particular, measurements and experiments need to be taken and conducted on the surface of Mars by precursor landers to ascertain dust characteristics that will influence hardware design as well as provide toxicology data to safeguard crew health,” the report notes.

Joel Levine will speak on Mars dust and other scientific concerns in a seminar, “Humans to Mars: Some of the Issues.” It’s free and open to the public on Wednesday, Oct. 10, 4-5 p.m. in Room 1127 of the Integrated Science Center 3.