Attention to mental health has taken on even more importance as the world deals with stress brought on by the COVID-19 pandemic.

William & Mary encourages self-care in many ways for students, from campus recreation activities to a wide range of mental health services at its Counseling Center located at the McLeod Tyler Wellness Center.

University employees have access to the Employee Assistance Program for personal, family or workplace concerns, including free counseling, referrals to community-based resources and wellbeing-related training resources.

“Practicing healthy self-care can mean the difference between stress and unsustainable strain,” said Kelly Crace, William & Mary’s vice president for health & wellness. “This year, especially, with the disruption of predictable stressors and traditional restorative opportunities, it's imperative that we develop a habit of daily engagement in self-care and restoration. It can be a few minutes daily and something more extensive weekly or monthly.”

W&M faculty members do just that, participating in a variety of hobbies and activities as one of many ways to cope with stress in their daily lives and anxiety surrounding COVID-19. For example:

A connection that goes deep

Lashley started playing football at 13 in Germany, where her family was granted asylum after escaping from Iran.

“My family escaped Iran so we could enjoy certain freedoms,” said Lashley, who plays quarterback and fullback for the Richmond Black Widows of the Women’s Football Association. “I wanted to be able to do everything men can do. So I shocked everyone by starting to do the least likely thing anyone had ever heard a Middle Eastern girl do: play American football.”

Lashley said football “is a huge stress relief for me. Football gives me so much balance in life.

“I could be totally down from a negative experience or conflict related to teaching or completely frustrated due to some research project that ended up failing. But then I go to the football field, where I run and hit and tackle. I get to leave all my aggression on the field.”

Lashley and her teammates were in the process of training for the season when the pandemic hit. They had to stop all practices in mid-March.

“While we couldn't really practice for a long time, having my teammates and the camaraderie and bond that is between us helped me immensely during the pandemic,” Lashley said. “We had several team social gatherings via Zoom that helped everyone keep up the morale and not feel completely isolated.” 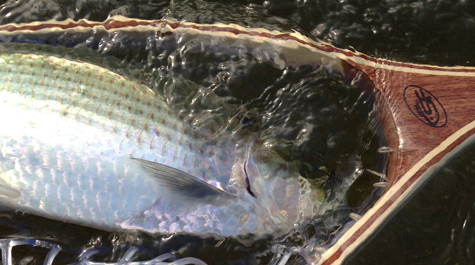 Pineda gets his stress relief by frequenting the rivers near his home. Fishing was particularly helpful during the early days of the pandemic.

“Fishing provided me with an opportunity to live wholly in the world—in the natural world, specifically,” Pineda said. “Though at the time, like most of us, I was paying constant attention to the updates by our leading scientists, I was finding myself inundated by the politics, especially the way the view of this new disease was quickly being politicized.

“Remaining attentive to such competing information takes its toll. In addition, people were suffering, and still are, and I was aware my ability to escape to the river, even if just for a short amount of time, was a privilege and one I didn’t take lightly. I like to think that the benefits that the river provided me in centering my thoughts carried over to how I interacted with my family, my students and my work.”

Fly fishing is a creative outlet for Pineda as well. An award-winning author of poetry and novels, Pineda has derived many of his ideas while wading into the waters of the Rappahannock and Rapidan rivers.

“I tie my own flies, and so that activity, along with just being in the river, provides me with time to think about stories and poems, to think about the questions I might be working through in my new manuscript,” Pineda said, who is strictly catch and release. “Fly fishing definitely helped me focus at the start of the summer and complete a draft of my new novel.” 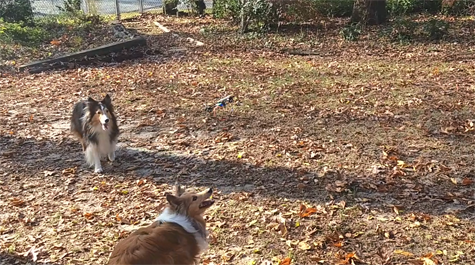 While working at home in the spring, Abelt took breaks to fly his drone around the back yard. The activity doubled as great exercise for his Sheltand Sheepdogs, Rooney and Gilley. Not much has changed now that in-person classes have returned.

“I am still required to get out a drone immediately when I return from work,” Abelt said. “It is a complete break from the stress of the day.”

Abelt’s dogs love to chase the drones. They sprint back and forth trying to catch the flying machines.

“Shelties are high-energy dogs,” Abelt said. “They need lots of physical activity. My wife and I walk them, I run them, and we have them chase each other in addition to chasing the drones.”

Abelt draws a lot from the activity, and so do the dogs.

“The bigger dog will get the drone now and again,” Abelt said. “I have had to replace the drone periodically when the damage gets too severe.” 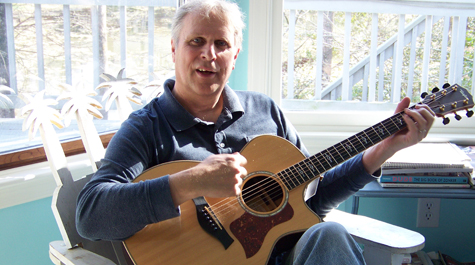 Pike is a man of many hobbies. He is a crossword puzzle aficionado who writes chemistry-themed puzzles for the yearly W&M chemistry alumni newsletter, some of which have been reprinted in the American Chemical Society newsletter.

He also plays acoustic guitar, bass and some piano. He has played guitar for nearly 50 years.

“Music speaks to almost everyone, and the benefits are that much greater when you make the music yourself,” Pike said. “Just sitting down after work to figure out songs and practice licks calms my mind.”

Pike is a founding member of the Williamsburg Acoustic Music Club, which met monthly for jam sessions before the pandemic. While he misses playing with his friends, Pike has been able to create some of his own music during their time apart.

“On the plus side, I’ve been playing a lot more during the pandemic and have even dared to post myself playing on social media as a way to keep in touch with my musician friends,” Pike said. “On the minus side, our music club went into a several-month-long hiatus as COVID-19 struck.

“Only recently have we begun playing again – out of doors and with social distancing. I think musicians were hit particularly hard by the lock-down. Playing together is so much better than playing alone.”

Martin planted a victory garden in the spring, a raised bed consisting of zucchini, beans and okra. He also grew some tomato plans and Tuscan kale in pots, as well as some potatoes, sweet potatoes and North Georgia candy roaster squash.

“Much of my normal workday is spent in front of a computer, so I was looking for a way to balance that with physical activity,” Martin said. 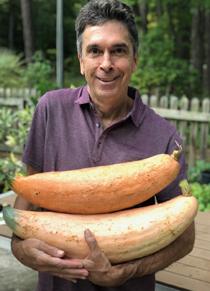 Martin was a regular at the James City County Recreation Center before the pandemic. With his usual location for physical activity no longer available, Martin sought other ways to stay active.

“Starting a new garden is a lot of work. I had to dig two feet of clay out of one bed, set up another raised bed, and use a wheelbarrow to move dirt and compost around,” Martin said. “The garden got me out of the house and provided a lot of our vegetables for the summer.”

Martin used a technique called Hugelkultur (pronounced hoo-gul-culture) that he learned from a former student where mounds are created from rotten wood and compost and then seeds are planted on top.

“I enjoyed learning about a completely different field,” Martin said. “It was also nice to see immediate results like seeds sprouting, which is so different from academic publishing. And since I was a beginner, I began asking friends in other states for tips, like when they planted garlic and what sequence they planted things in. I also traded tips with my neighbors and gave them some zucchini.”

The art of baking 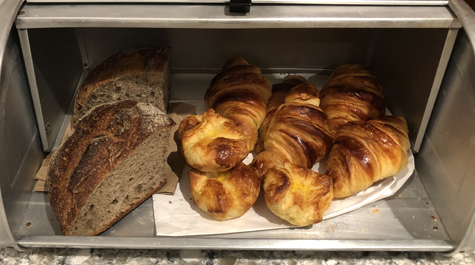 For many, the pandemic created a whole new set of challenges in regards to work-life balance. It was new. It was tumultuous. It upended daily routines.

For some, that meant less time for hobbies. That was the case for Weiss, who had progressed to baking two loaves of sourdough bread a week, as well as bagels and other items.

While Weiss still loves to bake, the time he has to do so has diminished.

“No one has the notion that the pandemic is ‘time out’ as so many did in March,” Weiss said. “The pandemic is a time when we’re disoriented and spending tons more time trying to figure out how to respond to all the demands of a newly structured work week.”

With free time such a valuable commodity, Weiss relishes the now-limited opportunities he gets to bake. He delights in the effort to bake the perfect loaf, and he loves to give his bread to friends.

“Most of all, I like the artistry of it,” Weiss said. “I love to combine all of the elements, learn something new with each bake, figure out how to alter ingredients, get access to cool flours. But especially, I love the anticipation of what the loaf is going to look 20 minutes after you pop it in the oven. That’s what it’s all about. Will it rise up and have a burnished crust, a shapely line? You never know. You hope so, and you can get closer to your goal, but it’s never perfect, so there’s always more to strive for.

“Next, honestly, I love giving bread to friends. They’re quite appreciative, and it feels like a genuine gift, a small kindness, especially during a difficult time. And this also keeps me from eating it all. But, make no mistake, I make delicious bread.” 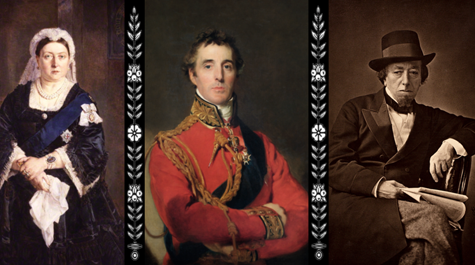 Designing board games is a fun distraction for Hellyer, who is currently developing one of his games with a commercial publisher.

“Making games takes a lot of concentration, and it gets my mind off of everything else,” Hellyer said. “It also gives me a clear, achievable goal that I can work towards, and that helps when other things are falling apart.”

Hellyer got into game design five years ago.

“I like making moderately complex historical simulations,” Hellyer said. “One game I’m currently working on is called ‘Prime Minister,’ a game set in the Victorian era where players compete for control of Britain’s Parliament. I’m excited to have a publisher lined up for that game, and I hope to see it commercially released in the next year or two.”

At first, the pandemic posed a major threat to his game’s publication prospects, as the game’s publisher, like many small businesses, struggled to stay operational. Ultimately, everything stayed on track, and Hellyer was provided a clear goal to work toward during the tumultuous time.

“My publisher asked me to create a solo variant for ‘Prime Minister,’ and that was a perfect pastime for the pandemic,” Hellyer said. “During my free time over the spring and summer, I created an automated ‘Clockwork Politician’ that could beat me at my own game. It’s like playing against a computer, but with cards for programming instead of code.”