She integrates his philosophies and lessons into her job, her life and her future aspirations.

Haines, who is pursuing her Ph.D. in American Studies at William & Mary, recently won the 2016 MLK Award from Tidewater Community College, where she has been an assistant English professor since 2012. Prior to that, she earned her bachelor’s degree in film studies with a minor in English from Texas Christian, her master’s in British and American literature at Hunter College and her law degree from Boston University before practicing law in New York City.

In making the announcement, the college lauded Haines’ interdisciplinary style that surpasses learning how to write.

“They study law, they apply concepts from math and science, and they develop critical thinking skills necessary to explore many of the social injustices facing us today,” a press release from the college proclaimed. 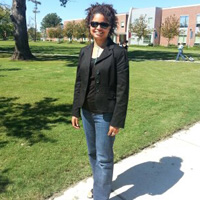 “This award means a lot to me,” Haines said. “Knowing that you are opening the minds of students and their actions and how they impact on the world, that’s what teaching is all about, especially when it comes to things like social justice.

“People think social justice is such a radical thing to teach students. People are always asking, ‘How do you get away with that?’ And I answer, ‘How do I get away with teaching empathy? Teaching compassion? What is there to get away with? I’m teaching them how to be human beings.’”

Haines’ students read everything from Plato’s Allegory of the Cave to the essays of David Foster Wallace to King’s “Letter from Birmingham Jail.”

The lessons from the latter reach far deeper, Haines said, than struggling for equality.

“That may be an oversimplification, but it gets them thinking how to structure their argument. I show them that you can argue something with passion, but without hyperbole. I use things like the ‘Letter from Birmingham’ to show them structure, organization, how to look at argumentation – even social justice as a dialogue – to move them into ideas of equality and justice, and what it means.”

Haines said that while “empowerment” has become a buzzword in education, she sees a different reality.

“I think that’s where my law background comes in very handy. I teach using the Socratic Method, which drives students crazy, but leads them to think about what they think and why they think it.”

The complete sphere of King’s influence, she said, was dramatically reduced by his assassination in April 1968, so much so that most people connect him solely with issues of race.

“He was definitely against the Vietnam war; definitely against militarism,” she said. “I can’t even imagine what he would think seeing small towns with tanks and armor and the riot gear that police wear now. I think he’d be appalled.

“At the time of his assassination, he was gearing up for the anti-poverty campaign. He realized it wasn't just about race; everybody had to be united, and he recognized that one way for the people on top to remain in power was to have the people at the bottom scrapping against each other. So his thing was let’s get rid of poverty; if we can get rid of poverty we can then work towards equality.”

Haines’ interest, post-doctoral, is pursuing a career in American legal history, especially as it pertains to racial justice and gender and race issues. Coming from a law and literature background, she is looking for ways to combine and use those specialties.