Ernest Hemingway may have had many lovers during a champagne-and-absinthe-soaked life that ended with alcoholism, depression, paranoia and suicide.

But he had just one true love.

According to Scott Donaldson, it was his first of four wives, Hadley Richardson. Donaldson, the Louise G.T. Cooley Professor of English, Emeritus, at William & Mary, chronicled a six-year marriage that in spirit lasted well beyond that in his new book, The Paris Husband. 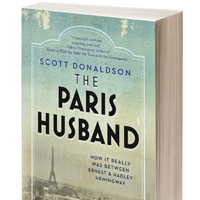 Although they divorced in 1927, Donaldson said, “He never lost touch with her and repeatedly wrote for her sympathy and support when in personal distress. ... Six months before his suicide, Ernest called Hadley to see if she could help him remember details about their Paris years, for his memory, once a ‘rat-trap,’ was now failing. Hadley helped as best she could but knew that Ernest was no longer the man she never stopped loving. She hung up and burst into tears. They’d never fallen out of love, she told her niece years later. They simply couldn’t live together.”

Donaldson, who came to William & Mary as an assistant professor of English and stayed for 28 years, specializes in books on 20th century American authors. Included are three previous works involving Hemingway, a biography and two books that focused on Hemingway’s relationship with F. Scott Fitzgerald.

Others Donaldson has written about, often with distinction, are Fitzgerald, Winfield Townley Scott, John Cheever, Archibald MacLeish, Edwin Arlington Robinson and Charlie Fenton. He also has explored his experiences as a biographer, as well as those of others in the field, in The Impossible Craft: Literary Biography.

Nearly eight years older than Hemingway, Richardson was raised by a well-off St. Louis family. She married Hemingway despite family protests after less than a year’s courtship. Donaldson said no one had more faith in Hemingway’s abilities than Richardson, whose trust fund facilitated the couple’s lifestyle.

In 1926, Hemingway’s The Sun Also Rises was published, which he dedicated to Richardson and their son, Bumby. But by then she was painfully aware that Hemingway was engaged in an affair with Pauline Pfeiffer, who would become his second wife. Perhaps to salve his conscience, Donaldson said, Hemingway signed over all royalties from the book and subsequent film to his soon-to-be ex-wife.

“It was, he thought, the least he could do,” Donaldson said. 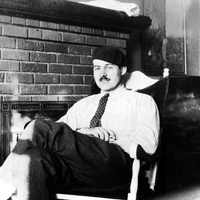 Although others have written about the Hemingway-Richardson relationship, they’ve all been from her point of view, Donaldson said, often ignoring what was going on in Hemingway’s life and career.

“He was struggling to establish himself as a young American writer living overseas,” Donaldson said. “That’s the focus of The Paris Husband, that and how he felt about his marriage falling apart as he was achieving success professionally.”

Some might argue that Hemingway chronicled that period himself in A Moveable Feast. But Donaldson said there’s a crucial caveat to that story that led him to dig deeper to flush the falsehoods and find truth.

“He repeatedly warned against regarding his written material, both fact and fiction, as gospel truth,” he explained. “His preface to A Moveable Feast ... explicitly tells readers to expect reordering or changes in what actually happened. It was not a simple matter of converting his own experience into stories or novels. He wrote some stories absolutely as they happened, invented others entirely, and no one, he maintained, could tell the difference.”

In addition, Donaldson delved into new material previously unavailable to other biographers, including pre-marriage letters between the two, letters from muckraking journalist Lincoln Steffens to Hemingway, unpublished notes, drafts and sketches found at the John F. Kennedy Library.

In the end, the failure of the Hemingway’s marriage was “almost inevitable,” Donaldson said. 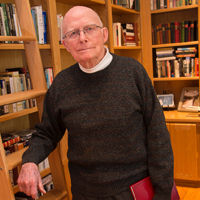 Both of their fathers committed suicide, and Hemingway’s two younger sisters lavished attention and adoration on their older brother. It was emotional buttressing Hemingway would crave throughout his life. Richardson married him knowing that, as well as what Hemingway would later call his “fault of character” that Donaldson said led more than once to deception and lying and adultery.

“She became both wife and sporting companion to Ernest, and also functioned to comfort and mother him,” Donaldson said, “while fully aware that he required the admiration — and even the love — of others.”

Even years later, Richardson refused to criticize Hemingway, not even for throwing her over for another woman. Donaldson reveals a snippet from an interview biographer Carlos Baker conducted with Richardson in which she replied to all suggestions that Hemingway’s shabby treatment of her was at the root of the breakup.