Photo - of -
by Vipin Reddy '15 |  June 7, 2013
Editor's note: Last semester, Jim Ducibella and David Williard of the Office of University Relations issued a challenge to students in one of English Professor Joanne Braxton's classes: Find people on campus, faculty or staff, that you feel are "unsung." Explain why you feel that way and, if approved, write a profile of that person for publication on this website. This is the fourth in a series of five such stories that have appeared as part of the "Behind the Bricks" series.

The Cohen Career Center is a seemingly perpetual stream of students seeking jobs, inquiring about internships, anxiously awaiting interviews and obtaining information regarding the multifaceted pursuit of a fulfilling career. Past the glass atrium, vertically lined and stretching towards the back of the building, is a row of offices in which numerous students have sought advice regarding their search for a career path. These offices belong to the advisers of the career center, as students have come to colloquially call the future-planning haven. One office in particular is a youthfully decorated room, adorned with memorabilia of recent college days and Baltimore, Md.

On the wall near the door of the office hangs a plaque that denotes the latest recipient of the W. Samuel Sadler New Professional Award, an award that was initiated in 2005 and, according to the William & Mary Student Affairs webpage, “recognizes the exceptional contributions and future potential of a professional staff member who has been in the student affairs field for no more than five years.”

This office belongs to Ashleigh Brock, an assistant director at the Cohen Career Center who in January became the 2013 recipient of the Sadler award.

“I’ve witnessed two people receive this award and have been very impressed,” Brock said. “When (Vice President for Student Affairs) Ginger Ambler called my name, I almost didn’t believe it. “It’s an acknowledgment that I care a lot about the work I do every day and I hope that care is manifested in the results.”

Career services wasn’t always the path that Brock intended to pursue, but it is a niche in which she obviously feels great comfort. While Brock attended the University of Richmond as an undergraduate and majored in journalism, rhetoric and communication studies, she will be returning to UR later this summer to serve her alma mater as assistant director of the office of Alumni and Career Services.

“I loved my academic life in college, but it wasn’t always on my radar to be thinking about to what do next,” said Brock. “As a senior in college, I remember coming back from an internship I had but didn’t love (to find that) the women I had lived with had it all figured out. That’s when I started to realize I (didn’t) know what I was doing.”

Brock soon connected her interests to a potential career path and began to pursue her passion for higher education.

“I remember sitting down senior year with my academic adviser,” Brock said. “I was panicked because a lot of my friends were committing to stuff, and I remember my adviser asking why I was so dedicated and loved what I was doing in college. He asked me to think globally and I realized that it was orientation. I was an orientation (leader) and loved it, so when he said I could do that as a job, it was amazing. I applied for admissions and I originally wanted to be a director of orientation.”

Following a foray into admissions and orientation, Brock began to focus more on student affairs and staff positions at the college level.

“I wanted to broaden my experience and went to Michigan State (for a masters in student affairs),” said Brock. “I worked 20 hours a week in their undergraduate career center as an adviser, and I really liked that I was able to teach students things that were helpful across the board. When I graduated in 2010, this William & Mary job popped up and it was perfect. It married my love of orientation and underclassmen work with experience in career services.”

Brock said she takes her career seriously because she understands that for many students, she may be the first person in a position of authority discussing future career prospects.

Although she enjoyed many aspects of her role as a career advisor to students, one part stood out: working with W&M students.

“I take inspiration from how eager students here are to work on their futures," she said. "My favorite part (was) teaching the MACE (Majors and Career Explorations) course; when coming here, part of the description was that I would create a freshman and sophomore experience program, and I spent time and research on what the Compass program would become.”

Through working at the Cohen Career Center, Brock was able to aid students in similar situations to the one she faceds in college.

“I see a lot of myself in the students I work with,” she said, “and can empathize when they don’t quite make the connection between their major and what to do after college.”

While Brock truly enjoyed her employment in career services, working at the career center was not entirely without obstacles. 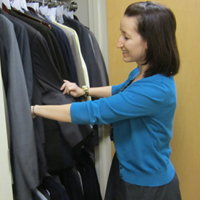 “One of the greatest challenges is finding ways to reach students, because so many entities are fighting for attention,” Brock said. “I wish there were a few more hours in the day. What’s most rewarding is when students come in and have succeeded, whether they got an internship offer, got into graduate school, especially when I knew they thought they couldn’t do it. (I see) a lot of crises of confidence, where William & Mary students have a lot to offer but feel that’s not the case. (I like to) push students to do what they’re afraid of and when it works, it’s so rewarding.”

In providing advice to others interested in a similar career as hers, Brock said, “Start talking to people who do that work to get a sense of what educational environments you like. Seek experiences that help you build essential skills, like job shadowing or informational interviewing. The more information students can gather, the clearer the path will become. For me, this meant looking at admissions jobs as a gateway.”

As was the case at W&M, Brock’s future position will enable her to exemplify her skills and pursue her diverse interests.

“I’m still figuring things out myself,” she said. “I don’t have a vision of where I’ll be at the end of my career. I just love what I’m doing, which makes it really easy to come to work every day.”