Judging of the projects took place Sept. 24-28 at iGEM’s annual Giant Jamboree in Boston. The results were announced Sept. 30 by the iGEM Foundation. 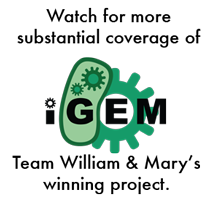 Their project, “Measurement of Promoter-Based Transcriptional Noise for Application in Gene Network Design,” was tops among the 280 teams in the Undergraduate Division. William & Mary also was the only North American team in any of the competition’s three divisions. In addition to the Grand Prize, the team also won honors for Best Measurement Project, Best Education and Public Engagement and Best Presentation.

“More than 2,700 participants from schools in every corner of the world came to Boston this week, testing their knowledge of synthetic biology in the ultimate test as teams worked to solve real-world challenges by creating novel genetically-engineered systems,” said Randy Rettberg, president of the iGEM Foundation, in a news release. “In our 12th year, the annual iGEM competition has not only become the central means for universities to teach synthetic biology, but iGEM has become an incubator — with the Giant Jamboree seeding the market with new innovations. Many winning projects and teams form new companies that quickly make an impact, resonating across the global marketplace.”

The iGEM Foundation is a non-profit organization dedicated to education and competition, advancement of synthetic biology and the development of open community and collaboration. The iGEM Foundation inspires future synthetic biologists by hosting student-led teams in the International Genetically Engineered Machine Competition. iGEM also runs the Registry of Standard Biological Parts with over 20,000 specified genetic parts — the world’s largest collection of standard DNA parts contributed by an open community.