The annual ceremony celebrates the founding of William & Mary by royal charter, granted by King William III and Queen Mary II of England on Feb. 8, 1693. Free and open to the public, the 2015 ceremony will mark the 322nd anniversary of the College of William & Mary. 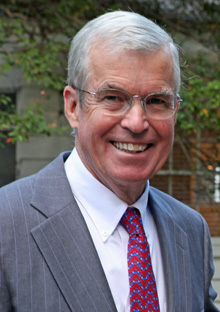 In recent years, Murray has chaired the Monroe Commission, a group working to highlight contributions to Virginia and the United States by President James Monroe, who attended William & Mary from 1774 through 1776, and also to preserve Ash Lawn-Highland, the William & Mary-owned home of Monroe located near Charlottesville, and build on the legacy of the nation’s fifth president.

"Jim Murray's professional success is rivaled only by his service to William & Mary," said President Taylor Reveley. "He has excelled as a venture capitalist, philanthropist, and leader.  In countless ways, Jim has contributed time, creativity and resources to W&M. With his wife, Bruce, he established the original 1693 Scholars Program, which attracts the best and brightest students to the College, and his leadership of our Monroe Commission brings long overdue attention to one of William & Mary's most influential alumni, President James Monroe."

"We also look forward to honoring two others who have made powerful impacts on higher education in Virginia: Tom Graves and Grace Harris. William & Mary thrived under Tom’s presidency, and we trace many of our current successes to work that began with him. Dr. Harris, undaunted by the segregated times in which she grew up and was educated, became an extraordinary leader at Virginia Commonwealth University. Her legacy in Richmond and beyond inspires us."

Murray is a general partner with Court Square Ventures and is a director of CSV II portfolio companies Continuum 700, GreatCall and Seakeeper. A founding partner of Columbia Capital, Murray has invested in early-stage companies for more than three decades, working with firms that specialize in investment banking and venture capital for telecom and information technology businesses since 1982. For two years, he was the CEO of North Coast Cellular, and, through his career, served as the director of more than two dozen technology companies, including seven that were IPOs, publicly listed or merged into public companies.

After receiving his undergraduate degree from the University of Virginia, Murray graduated from the William & Mary Law School in 1974 and has maintained a close relationship with the university since. He has been the president of the William & Mary Law School Alumni Association and a founding trustee and treasurer of the School of Law Foundation. He is an emeritus trustee of the Endowment Association (now the College of William & Mary Foundation), a lifetime member of the President’s Council, and a member of the Chancellor’s Circle and Fourth Century Club. The W&M Law School named him an Outstanding Alumnus in 1976, and the Society of the Alumni awarded him the university’s Alumni Medallion in 2001, making Murray the first non-undergraduate alumnus to ever receive the honor.

Four years later, he received an honorary Doctor of Laws degree from William & Mary and later became the chair of the seven-year Campaign for William and Mary. By its conclusion in 2007, the campaign surpassed its goal by raising more than $500 million to support a variety of areas at William & Mary, ranging from scholarships to research to new facilities. A leadership gift from Murray and his wife, Bruce, helped to establish the College Scholars Program, which enrolled its first class in 2004. Later renamed the Murray Scholars and now called the 1693 Scholars, the program offers the university’s most selective merit-based academic award. The scholars receive research opportunities and faculty mentorship and are able to participate in seminars, study for a semester at Oxford University, and design a cross-disciplinary major and capstone project. In 2013, a building on Jamestown Road was named the Murray House and serves as the current home of the 1693 Scholars Program.

In addition to the Monroe Commission, Murray was the founder of the Presidential Precinct, a partnership between the University of Virginia, William & Mary, the Morven property in Charlottesville, Jefferson’s Monticello, Madison’s Montpelier and Monroe’s Ash Lawn-Highland. The Presidential Precinct unites the three Founders’ homes, a World Heritage Site, two of the nation’s top public universities and a constellation of affiliated scholarly institutions to offer a physical and virtual destination for young global leaders to study and collaborate on the critical issues in building successful nations and the civic and economic institutions that support them.

“I am honored to have the opportunity to address the William & Mary community on the occasion of our alma mater’s 322nd anniversary,” said Murray. “I look forward to discussing the nation building legacy of James Monroe, one several William & Mary alumni who helped shape our country in its infancy, with members of the Tribe who will no doubt go on to shape our country and world in the years to come.”

In addition to his service to William & Mary, Murray has lent his time and talents to multiple other organizations throughout the years. He has served  as chair of the Albemarle County Industrial Development Authority, on  the Technology Crossover Ventures Internet Advisory Committee and the board of the Smurfit Graduate School of Business Administration at University College Dublin. He was the chairman of the Virginia Commission on Higher Education Board Appointments from 2001 to 2009, and he is the past chairman of the Advisory Committee of the Export-Import Bank of the United States.

His book, Wireless Nation: The Frenzied Launch of Cellular Revolution in America, was the first complete telling of how the cell phone industry evolved in America and was named one of the top 10 business books of 2001 by Booklist. Murray is also an inventor and holds a U.S. patent for a wireless maritime ignition control system.

Graves came to William & Mary in 1971, after a distinguished administrative and teaching career at Harvard and Stanford universities, and served as William & Mary’s 23rd president from 1971 to 1985. Graves holds honorary membership in Phi Beta Kappa, Omega Delta Kappa, Beta Gamma Sigma and Phi Sigma. To his service at the College, Graves brought high academic and professional values worthy of the institution, a steady administrative style, a firm will when needed, and the patience and good nature that made the exercise of that will infrequently necessary. 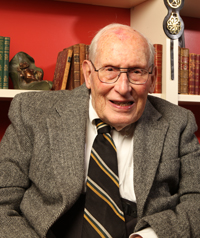 The College grew in every significant dimension under his leadership – notably, during his presidency the university launched its largest fundraising campaign to that date, raising more than $20 million in private gifts; the Virginia Institute of Marine Science was fully integrated into the university; the first language house on campus was established; the Muscarelle Museum of Art opened; the President’s House underwent a major renovation; construction of the Marshall-Wythe School of Law building was completed; Charles, Prince of Wales, visited the campus and received W&M’s first Honorary Fellowship; and a presidential debate between Gerald R. Ford and Jimmy Carter took place in Phi Beta Kappa Hall.  It was a time of considerable new construction, student activism was at an all-time high, and new programs and academic departments were emerging across the campus.

Graves attended Yale University as an undergraduate, pausing his studies after his freshman year to serve with the U.S. Navy in World War II. After earning his bachelor’s degree in 1947, he went on to receive a master’s and doctorate from Harvard University.

Graves served on the faculty of Harvard’s business school from 1950 until 1960, when he moved to Switzerland to direct the IMEDE Management Development Institute. In 1964, he became the associate dean of Stanford University’s Graduate School of Business; he also served as the director of that university’s International Center for Advancement of Management Education. Graves returned to Harvard in 1967 to become the associate dean of the Graduate School of Business Administration and served in that role until his presidency at William & Mary began in 1971.

After William & Mary, Graves worked with the Winterthur Museum and Garden in Wilmington, Delaware, as its director, CEO and a member of its Board of Trustees. Later, he became the director of Wilmington’s Grand Opera House and a member of the MBNA America Bank Educational Board. Graves, and his wife, Zoe, remained ongoing supporters of the College over the years following his departure from the presidency. In 1988, the Board of Visitors recognized Graves’ leadership and vision, bestowing upon him the title of President Emeritus.  Tom and Zoe Graves served as Homecoming Grand Marshals in 1996, and Graves was named an honorary alumnus in 2002 in recognition of his continuing support of William & Mary.  After retiring in 2004, he and Zoe moved back to Williamsburg.

The Thomas Ashley Graves, Jr. Award for Sustained Excellence in Teaching, presented every year at Commencement to a William & Mary faculty member, was named in his honor.  Established in 1984, it was endowed by alumni and friends of the former president and first awarded in 1986.

Harris is a distinguished professor in Virginia Commonwealth University’s Center for Public Policy. She served as VCU’s provost and vice president for academic affairs from 1993 to 1999 and was acting president of the university for several months in both 1995 and 1998. Previously at VCU, Harris was the vice provost for continuing studies and public service and dean of the school of social work. 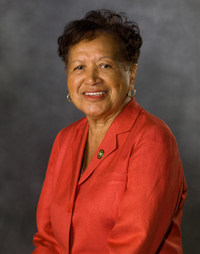 According to a 2013 Richmond Times-Dispatch article, Harris had wanted to attend Richmond Professional Institute (RPI) of the College of William and Mary in the 1950s but was rejected during a time when integration had begun but was slow to take hold at universities in southern states. A graduate of Hampton Institute (now Hampton University), Harris would go on to attend Boston University, where her classmates included Martin Luther King, Jr., before finally gaining admittance to RPI where she earned her master’s degree in social work in 1960. Eight years later, RPI merged with the Medical College of Virginia to become Virginia Commonwealth University.

Harris served as a caseworker and supervisor for the Virginia Department of Welfare and Institutions, executive director of Friends’ Association for Children and assistant director of the Richmond Community Action Program before joining the faculty of VCU in 1967. Harris continued her education at the University of Virginia, earning a master’s degree in sociology in 1974 and a doctorate in 1975.

In 1999, the VCU Board of Visitors established the Grace E. Harris Leadership Institute in honor of Harris’ service to the university, and she continues to provide direction and oversight for that organization. Harris also serves with several community organizations in the Richmond area, including the advisory board of the Virginia Health Care Foundation and the Virginia Commission on Higher Education Appointments.