An exhibition at the Muscarelle Museum of Art explores the founding, funding and legacy of the Brafferton, W&M’s second-oldest building

Built in 1723, the Brafferton Indian School has a long history as part of William & Mary. It was this complex history that prompted one professor and several students to dedicate years of research to discovering and unearthing what has been forgotten. In Building the Brafferton: The Founding, Funding and Legacy of America’s Indian School, on display at William & Mary’s Muscarelle Museum of Art until Jan. 8, 2017, their findings are bringing that history to light once again.

The second-oldest building on campus, the Brafferton was originally built as a school for Native American boys. It was constructed using the annual income from the Brafferton Manor in Yorkshire, England, but was closed during the American Revolution when W&M lost funding. Since then, the Brafferton building has been used for a variety of purposes but today is home to the offices of the president and the provost.

As a culmination of 10 years of research on both sides of the Atlantic, the Brafferton exhibition is the first of its kind to explore the history of the building itself.

To create the exhibit, Danielle Moretti-Langholtz, lecturer and director of the American Indian Resource Center in the Department of Anthropology and adjunct curator of Native American Art for the Muscarelle Museum of Art, alongside Buck Woodard Ph.D. ’13 and numerous graduate and undergraduate students, delved into the rich history of the building’s place within Great Britain’s imperial designs for North America, trade networks and politics of the 18th century.

Among the documents, historical paintings, engravings and other artifacts in the exhibit are several historical items from actual students of the school, including Thomas Step of the Nottoway tribe and Henry Bawbee of the Wyandot tribe at Fort Pitt. Several rare paintings and a recently uncovered 1771 map of the Brafferton Estate are also included. 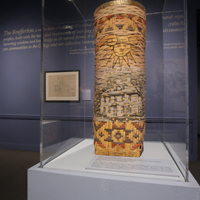 According to Moretti-Langholtz, however, the history of the Brafferton truly comes alive in the “legacy” feature of the exhibition. From the names written across the wall throughout the exhibit to the specially commissioned works from the present-day tribes, the revived relationships with the Pamunkey, Cherokee, Nottoway and Wyandot tribes truly show the living history of the Brafferton school, she said.

“It’s easy to tell just an event-level story, but it’s such a complicated story,” Moretti-Langholtz said. “I think one of my concerns was … how can I tell it so that it can make sense to somebody who wants to look in deeply?”

It was exactly that deeper and often overlooked story that Moretti-Langholtz and her students sought to discover and tell in Building the Brafferton.

In between the founding, funding and building the present-day legacy of the building, there have been intermittent periods of forgetting, according to Moretti-Langholtz, as well as a perspective that the Brafferton Indian School didn’t amount to much.

“I don’t think there’s been a plan to forget,” said Moretti-Langholtz. “It’s just the changing relationships between the new nation and Indian nations that broke those earlier bonds, and they weren’t restored the same way.”

Moretti-Langholtz said the Brafferton Indian School contains a history that is often overshadowed and forgotten despite being the most successful and important Indian school of the 18th century. However, she said that it is one that is worth reliving.

“It was an extraordinary time in history, and they deserve to be remembered,” Moretti-Langholtz said. “It would be my hope that this exhibition is the opportunity to create links to those communities and say, ‘We remember that you were here, and we remember what some of your community members did.’”