History was made at William & Mary over Homecoming weekend when the first two buildings named for people of color at the university — Lemon and Hardy Halls — were dedicated.

More than 300 students, faculty, staff, alumni and community members gathered in a field embraced by one of the retitled residence halls for the Saturday morning ceremony in honor of Lemon, a man enslaved by the College in the 18th century, and Carroll F.S. Hardy, a longtime administrator who made monumental strides in diversity at William & Mary.

“We’ve come together to recognize, to honor, to celebrate a large group of William & Mary people who have never had a campus building named for them despite their importance to the College’s existence and success since literally 1693,” said President Taylor Reveley.

“For hundreds of years, they have worked to sustain our institution,” he continued. “They’re the William & Mary people, African Americans, who suffered the hammer blows of the College’s traffic in slavery, secession and segregation. And what we do today as part of our journey is remember them and repent for how badly they fared at the hands of Alma Mater of the Nation.” 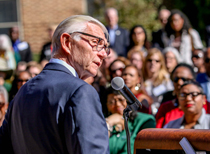 W&M Chief Diversity Officer Chon Glover M.Ed.'99; Ed.D.'06, who credits any success she has had at the university to Hardy, thanked the Task Force on Race and Relations for making the renaming possible. Last semester, the task force, which Glover chaired, put forth a report and 51 recommendations, including one that buildings on campus be named to more fully reflect the diversity of the W&M community.

In addition to the task force, Glover credited the realization of that proposal to Reveley, Provost Michael R. Halleran and the members of the Board of Visitors who unanimously and without hesitation approved the renaming of the Jamestown Residence Halls.

“Today, we add a new chapter to the history books of William & Mary,” said Glover. “For the first time in our history, we are naming two buildings for African Americans. That in itself, is worth a celebration.”

Lemon worked at both William & Mary’s Nottoway Plantation near Emporia, Virginia, and on its Williamsburg campus. But he was also an entrepreneur, Reveley said, noting that Lemon farmed his own plot and sold produce to the College.

In 2009, W&M established a long-term research project in Lemon’s name to explore the College’s involvement in slavery and segregation and its continued relationship with the African-American community.

“The dedication of Lemon and Hardy Halls is a very special moment for William & Mary and for all the people who understand that what we communicate in our space matters,” said Jody Allen, co-managing director of the Lemon Project. “Having Lemon’s name on a building is an important step toward not only acknowledging but embracing the history of the black experience at the College. Lemon represents himself, but also a host of people whose names we don’t know and may never know, but their contributions helped to build and grow the College and they must be remembered.

“I like to think that Lemon’s name will always spark the question, ‘Why is this hall named after a lemon?’ And that the person asked will answer, ‘Well, let me tell you who Lemon was.’"

In naming a building for Lemon, W&M joins a very small group of universities that have named buildings in recognition of enslaved people, Glover said.

"That’s a really unique group, so I am very proud that we are in that group as we honor Mr. Lemon," she said.

“Carroll Hardy worked tirelessly to increase diversity at W&M and to improve the experience of people of color who came here,” he said. “To those who were doing well, Dean Hardy was quick with an encouraging word. For those who were struggling, Dean Hardy pushed, pulled, cajoled until a degree was in hand. She cared for all, and she was beloved by all.” 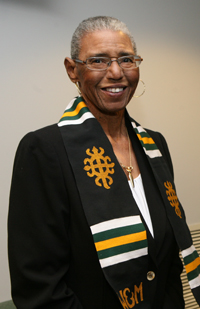 Catherine Faddis ’91, who attended Saturday’s event, was one of the many students at W&M who found a mentor and more in Hardy. She attended programs started by Hardy and worked as a student in Hardy’s office during all four of her years at W&M. When Hardy found out that Faddis, an accounting major at William & Mary, had been accepted into Harvard’s M.B.A. program, Hardy was beyond proud.

“She was so elated,” said Faddis. “It was like her own daughter had gotten in. She was incredible.”

When Faddis started working as an auditor, Hardy took her shopping and made her buy the best suits possible. And when Faddis moved to Williamsburg to begin a new job as a chief financial officer, Hardy gave her a place to live.

Hardy was a selfless giver,  Faddis said, “and I am proud of the school that they are honoring her in this way.”

Like Glover and Faddis, Ruth Jones Nichols’ life was never the same since her first interaction with Hardy over the phone as a high-school junior.

Speaking at Saturday’s dedication ceremony, the 1996 graduate remembered how Hardy opened the door to W&M with a scholarship for a pre-collegiate program at the university. 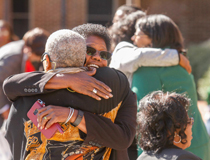 “I knew that if I could just get to William & Mary, there would be a person who would look out for me,” Nichols said. “We all have our own unique story about how we arrived at William & Mary and the different ways that Dr. Hardy impacted our lives while we were here. The common thread in each, I’m sure however, is the manner of in which she embraced our diverse talents and potential to help mold us into future leaders.”

Building that legacy was Hardy’s calling in life, Nichols added, the thing she lived for.

“The College has done its part to honoring Dr. Hardy by bestowing her with an honorary doctorate and naming a building in her honor,” she continued, “but what will we do to continue Dr. Hardy’s legacy at our institution of higher learning?”

Earl Granger III '92, M.Ed. '98, associate vice president for development and another person who worked closely with Hardy, has been looking to create an endowment in Hardy’s name, Nichols noted, asking those gathered at the ceremony to consider how they might be a part of that effort.

“William & Mary is our institution, and it’s our community to own,” Nichols said. “At the end of every day, Dean Hardy would always remind her mentees and students that the only way we can repay her is to do for others what she did for us. I challenge all of you to think about what you can do not just in the communities where you live now but what you can do for the College of William & Mary.

“Dean Hardy, I know, is very proud of all that we are and all that we have become, but if she could say anything to us today or something to me, she would say, ‘Sister girl, you know that your work is not done.’”

At the end of the ceremony, people involved with the Lemon Project and several of Hardy’s family members helped Reveley and Glover unveil plaques for the renamed residence halls. 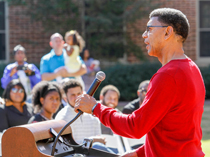 John Stuart, Hardy’s brother, thanked the W&M community for the special recognition of his sister.

“Carroll was so encouraging, supportive — she treated all people with dignity and respect,” he said. “That’s something we all should do.”

Stuart recalled the lyrics of a hymn they’d often sing: If I could help somebody along the way, my living shall not be in vain.

“She really walked that,” he said. “Her living shall not be in vain, right here. We thank you from the bottom of our hearts for this special occasion, this special moment for her.”