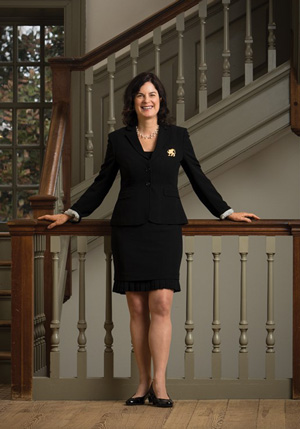 Katherine A. Rowe, who was sworn in as W&M's 28th president on July 2, spoke at the event along with Robert M. Gates '65, L.H.D. '98. In addition to the inauguration, the ceremony included the re-investiture of Gates as Chancellor of the university. The Board of Visitors unanimously voted in September to reappoint Gates for a seven-year term, beginning July 1, 2019.

The annual Charter Day event celebrates the university's founding by British royal charter in 1693. The 2019 ceremony marked the 326th "birthday" of William & Mary.

"As a scholar, educator and an entrepreneur, I am naturally drawn to William & Mary's royal charter for both its history and its vision," Rowe said. "So I’m honored to share my inauguration with the celebration of William & Mary's foundational document. Leading this university's next chapter is exciting and humbling. I'm also looking forward eagerly to honoring our exceptional chancellor, Robert Gates."